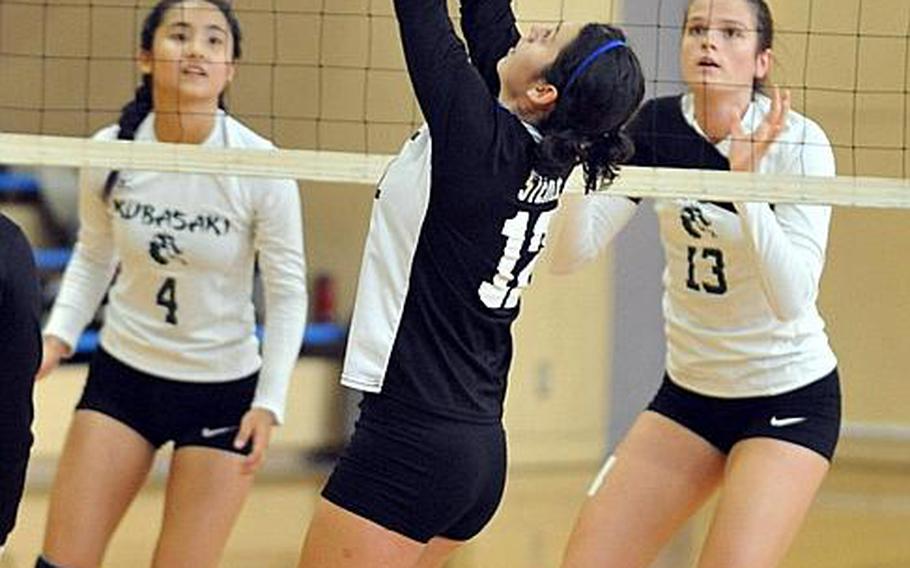 Seoul American experimented with sophomore Faith Stehle at setter and it paid off as the Falcons finished second in Korea's regular season and third in the league postseason tournament. (Dave Ornauer/Stars and Stripes)

Seoul American experimented with sophomore Faith Stehle at setter and it paid off as the Falcons finished second in Korea's regular season and third in the league postseason tournament. (Dave Ornauer/Stars and Stripes) Mimi Larry, left, and Alanna Stein of Kubasaki and Savannah Napierski of American School In Japan are familiar foes. The Dragons and Mustangs have met in the last two Far East Division I finals, with Kubasaki winning, and split their appearances in the ASIJ-YUJO tournament the last two years, Kubasaki winning in 2015 and ASIJ last month. ASIJ captured D-I titles from 2011-13. (Dave Ornauer/Stars and Stripes) 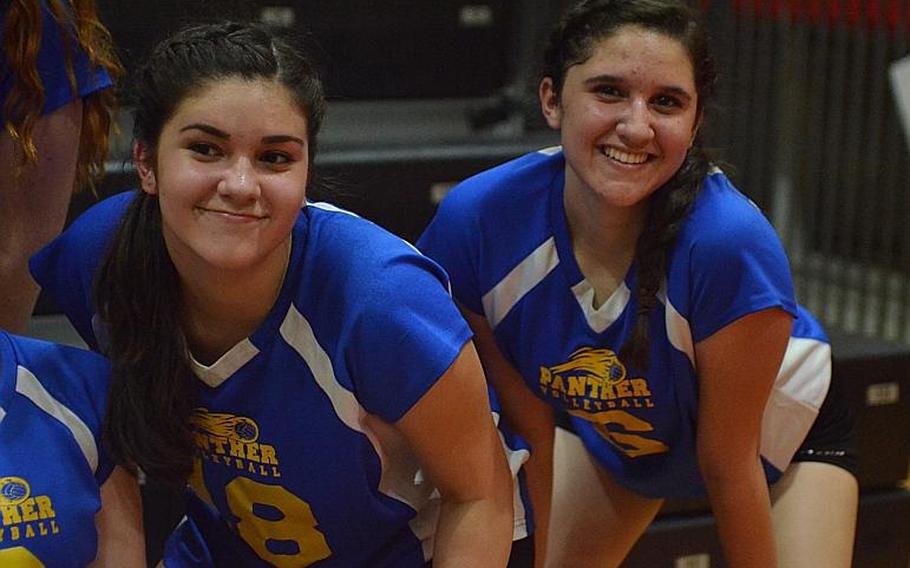 Sisters Irene and Adrianna Diaz have infused power and offense for Yokota girls volleyball, one of the favorites to win the Far East Division II Tournament title. (Dave Ornauer/Stars and Stripes) 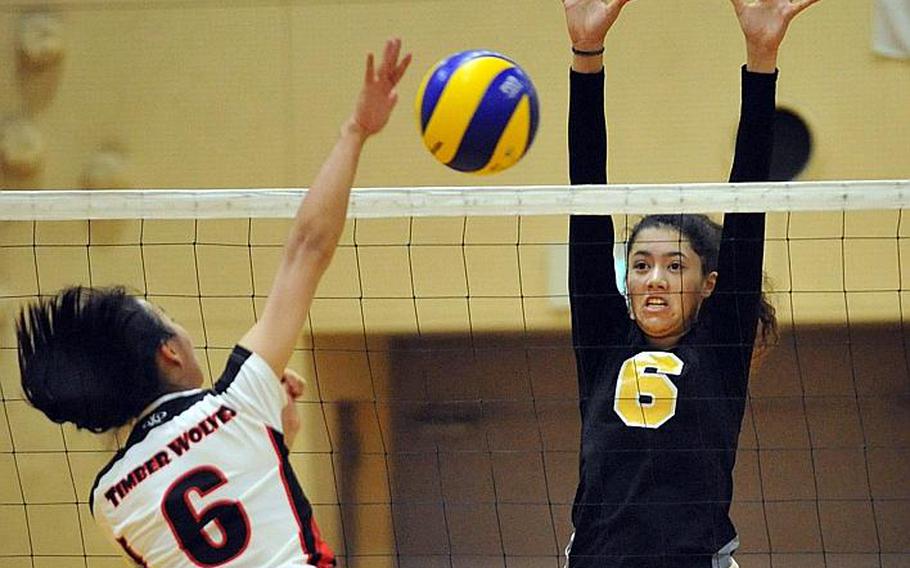 Height, in the form of sophomore middle blocker Saj McBurrows, played a big role in the resurgence of Kadena, which beat two-time defending Far East Division I Kubasaki for the first time since 2011. (Dave Ornauer/Stars and Stripes) 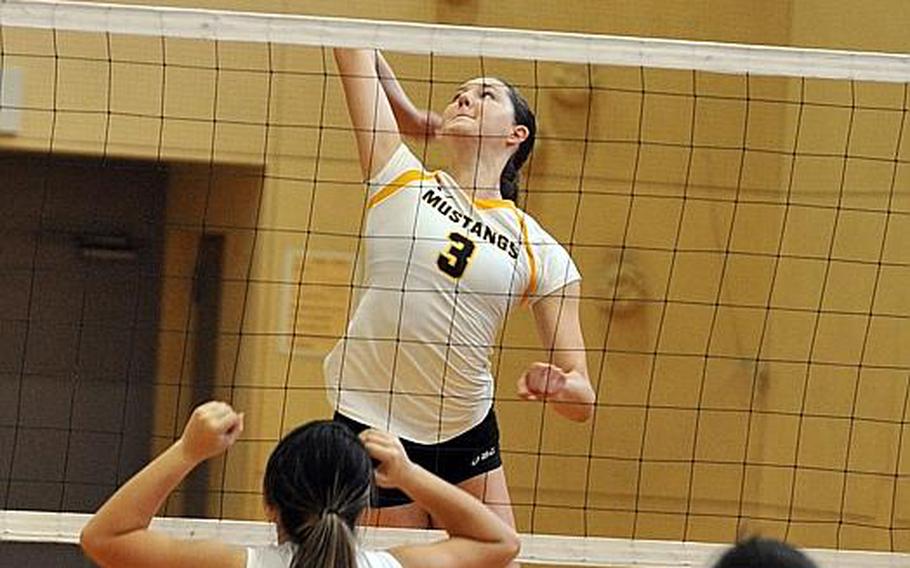 ASIJ's Elyse Davidson, a senior, has been a cut above in Far East Division I tournament play the last two years, earning All-Tournament selection twice as well as being the reigning Best Hitter and Best Blocker from 2015. (Dave Ornauer/Stars and Stripes) 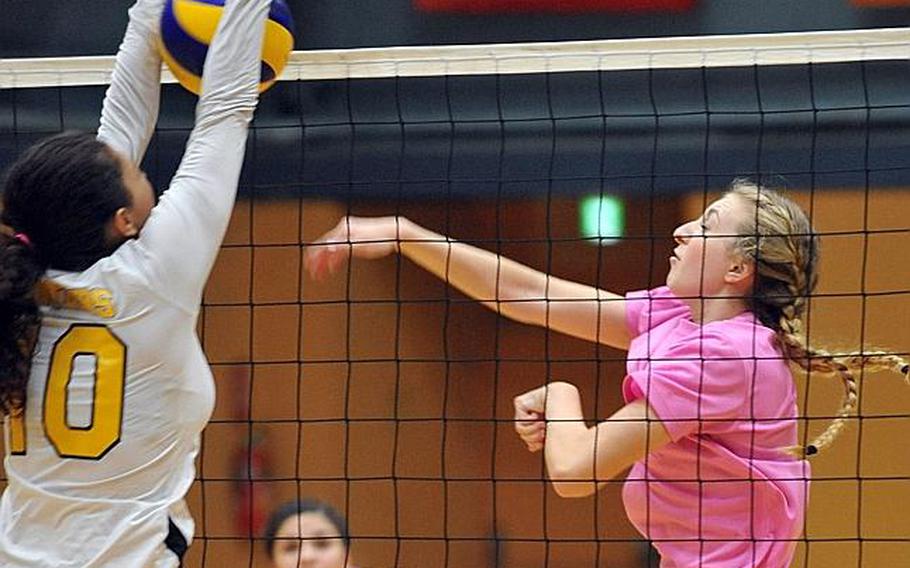 A pair of transfers gave a boost to their respective new teams. Senior Isabel Tayag, left, moved from Edgren and added height in the middle for Kadena. Ashlyn Yevchak, a junior, came from Idaho to help fuel Yokota's run to D-II title contention. (Dave Ornauer/Stars and Stripes)

To say that Britney Bailey has collected a handful of airline boarding-pass stubs the past few months would be to suggest that there are a few grapes in California or coffee beans in Colombia.

From Hagatna, Guam, to Vicenza, Italy to Tokyo. From tropics to Alps to big city. From Panther to Cougar back to Panther. From June to October.

And from All-Island volleyball player on Guam, the junior middle blocker has now become a vital cog in a Yokota team driving for the Far East Division II title.

“This was a gift” for Yokota volleyball, said coach Dennis McKibben of Bailey’s arrival. From that standpoint, the timing could not have been better, for the Panthers were compensating for the loss of senior Irene Diaz with a foot injury.

Initially, it was a matter of fitting the 6-foot Bailey into an already established lineup that featured Diaz and her sister Adrianna, transfers from New Mexico, and Ashlyn Yevchak, from Idaho.

“But those are problems any coach would love to have,” McKibben said. “There were the obvious hiccups here and there, but she just stepped right in and we continued to play as if she’d been on the team all year.”

Bailey’s mother, Helen, had been working with DDESS Guam for six years before being transferred to Vicenza. She was then promoted to DODEA-Japan community superintendent and moved to Yokota, where she’s working for her old boss on Guam, Dr. Steven Bloom.

“I’ve been on three teams in four months; this was easy,” said Bailey, adding that her team welcomed her quickly. “Everybody is really friendly and it really feels like a family.”

Irene Diaz is still questionable to play in the tournament. But with Bailey in the middle complementing the others, the Panthers immediately become a favorite to win a Far East tournament they’re hosting for a second straight year.

The Division I tournament runs concurrently at Seoul American, featuring six teams in round robin and elimination play. Kubasaki is the two-time defending champion. Both tournaments end Thursday.

Yokota could see challenges to their favored status from a rejuvenated Zama team, which got in its share of new players, including sophomore setter Cameron Baker and junior middle blocker Tasia Nelson.

Coach Veronica Jones is optimistic, especially in the wake of a four-set victory over Division I Seisen. She says she sees a difference in the team’s approach.

“In the past, Zama would get to the point where if they were down, they were down and there was no bringing them back up,” Jones said. The turning point was dropping the first set to Seisen 28-26, then sweeping the next three.

“I was so proud of the way they played. And I’m like, that’s what you have to do, you pushed yourselves to that level, you stuck it out and you did it.”

One team with little height but solid results was Osan, which went 8-4 in Korea’s regular season, then went on to finish second in the Korea Blue postseason tournament behind setter Aubri Garcia and hitters Allyson Marek and Amber Cash.

“I can honestly say I can see us taking home the banner,” said coach Krista Fagala of Osan, which won the D-II title two years ago after finishing fourth in the Korea Blue tournament..

“The girls of been working hard and are willing to give it their all. It all comes down to how bad they want it and I believe they want the title.”

While the Dragons became the first DODEA-Pacific team to win back-to-back Division I titles in 2015, they, too, are short on height but also bring back plenty of veterans in Best Defender Jordyn Guerrero and two-time All-Far East outside hitter Maiya Larry.

They did fall in the regular season to Kadena for the first time since 2011, and lost in five sets to their arch-rival American School In Japan – D-I champs in 2011-13 – last month in the finals of the ASIJ-YUJO tournament in Tokyo.

“It was kind of an eye-opener,” Kubasaki senior Sammie Hernandez said. “We were definitely disappointed, (but) I wasn’t sad about it. It made us have our eyes open, so that when we go into Far East, it’s not like we’re just going to win this.”

ASIJ has much motivation as well; the Mustangs fell against the Dragons in the last two D-I finals, and this is the senior season for main hitters Elyse Davidson – the reigning Best Hitter and Best Blocker – and Savannah Napierski and setter Allie Rogers.

“We are excited and ready for the challenge,” Davidson said.