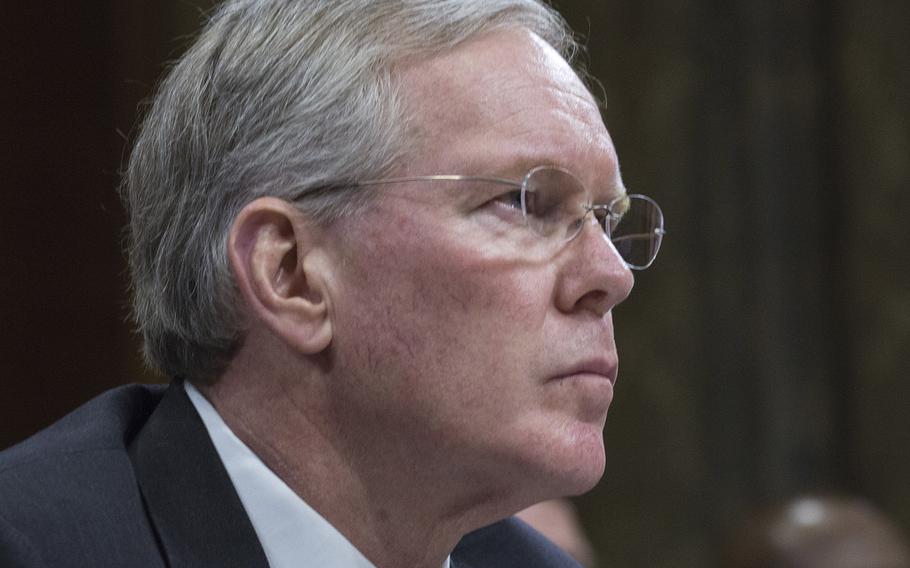 The three military exchange services and the Defense Commissary Agency (DeCA) would be merged into a single resale enterprise under a proposal backed by John H. Gibson II, the Defense Department’s new chief management officer, who has been tasked to make DOD business operations more efficient.

Gibson and a team tasked with reviewing military community services — base stores, recreation services, family support services and base schools — have drafted a memorandum, apparently for signature by Deputy Defense Secretary Patrick M. Shanahan, that would order extensive streamlining.

If and when signed, the memo would have the Department of Defense under President Donald Trump reconsider, and likely reverse, an Obama administration decision of two years ago not to consolidate DeCA with Army and Air Force Exchange Service and the exchange services run by the Navy and Marine Corps.

“Because of their different approaches to fulfilling their specific missions and delivering their respective benefits, the creation of a single resale entity through consolidation is not recommended,” DOD officials wrote in a May 2016 report to Congress on prospects for operating commissaries without cost to taxpayers.

“It is more appropriate to focus on the short-term goal of achieving greater efficiency in the operation of commissaries and exchanges, and to defer consideration of the feasibility of any merger until these issues have been effectively addressed.”

This administration, however, isn’t waiting. The departments of Army, Navy and Air Force were given only a few days in mid-March to share their views on the consolidation for resale operations presented in the draft memorandum.

Sources said the services are concerned about the timing of a complex consolidation, given current challenges transforming DeCA into an exchange-like profitable enterprise, using variable pricing of items by region and introducing higher-margin DeCA brands. Brokers and manufacturers supporting base stores say the changes are aggravating an already sharp decline in commissary sales.

Exchange store operators see their own patron traffic as linked to base grocery stores, so as commissary sales fall so too do sales at exchanges, gas stations and other on-base retailers. Declining exchange sales mean lower profits, or “dividends,” which the services rely on to fund on-base MWR or morale, welfare and recreation activities.

A Defense Department spokesman said no official could be made available to discuss the draft memo or concepts it embraces for store system consolidation for at least a few more weeks. Officials wouldn’t even provide written answers to questions, suggesting the time wasn’t right.

Stacey Kiley, a Senior Executive Service employee who served on the Defense Resale Business Optimization Board, has led the team tasked with reviewing community services. The draft memo explains that, after receiving team briefings, the department’s Reform Management Group, which Gibson leads, “acknowledged that the defense resale enterprise, in particular, has been studied too much” without recommendations being implemented. As a result, military stores now suffer from “the same industry, generation and demographic trends negatively impacting private sector grocery and retail companies.”

The team proposes that phased consolidation of DeCA and exchange services offers “the greatest potential to achieve the economies and efficiencies necessary for the survivability of the defense resale enterprise.”

The draft memo acknowledges that current law prohibits consolidating the commissary system with the exchanges so legislative relief would be sought “as soon as practicable.” Meanwhile, the team is to “assemble a cross-functional task force” no later than May 1, 2018, and to identify by April 15 a director to manage its work. This task force is to conduct “due diligence, assess the business case and develop integration plans” for DeCA and exchange services by Oct. 31.

The task force is to brief the Reform Management Group “upon business case completion.” If it confirms the team’s approach, “consolidation shall be executed immediately by the task force director” who will serve “as the new organization’s Executive Director, exercising authority, direction and control, until the permanent position is advertised and filled.”

In other words, said one critic who reviewed the memo, the person leading the task force becomes director of the organization it proposes to create — if the task force makes the appropriate business case to justify it.

“This thing is toxic. It’s putting the cart before the horse,” the official said.

Even if the business case for consolidating systems is not confirmed, military resale “will benefit from the standardization of its back-office processes and systems,” the draft memo says. “Therefore, in parallel with its other work, the task force shall begin standardizing those processes,” beginning with financial management and accounting processes. To ensure proper focus on standardization, the draft memo says on the date it is signed, store systems are to freeze work on modernizing information technology and suspend executive hiring.

“The success of this reform requires complete faith and active support of our decisions,” the memo concludes. “Therefore, all must know and believe that our intentions are to make these community services better for our members and their families, improve our support to commanders, be exceptional stewards of our appropriated funds and exhibit fiduciary responsibility” over resale profits.

One exchange official grumbled that this last paragraph was particularly odd, a warning perhaps not to make familiar arguments to Congress, patrons or other stakeholders for protecting the status quo.

Consolidation of commissaries and exchange services has been studied for decades, with 11 major reports produced just since 1989. Congress finally agreed in 2016 to give DOD officials sweeping new authorities to transform commissaries into more business-like operations and to reduce DeCA’s reliance on taxpayer funding, which last year and this still stood at $1.3 billion annually.

In the first year of transformation, however, commissary sales continued a five-year decline. Even if, arguably, rate of decline has slowed, it remains a dangerous trend that had put the entire military resale system in jeopardy.

They added that Congress allowed commissary reforms only on condition that savings to patrons be maintained and that revenues from exchange operations to support on-base morale, welfare and recreation activities not be reduced.

Those are priorities set in law, they added. That means that while Congress encourages efficient on-base store operations, current law requires that reforms be rolled back if the value of the shopping benefit can’t be preserved for patrons or if exchange profits, so critical to on-base quality of life, fall victim to the changes.