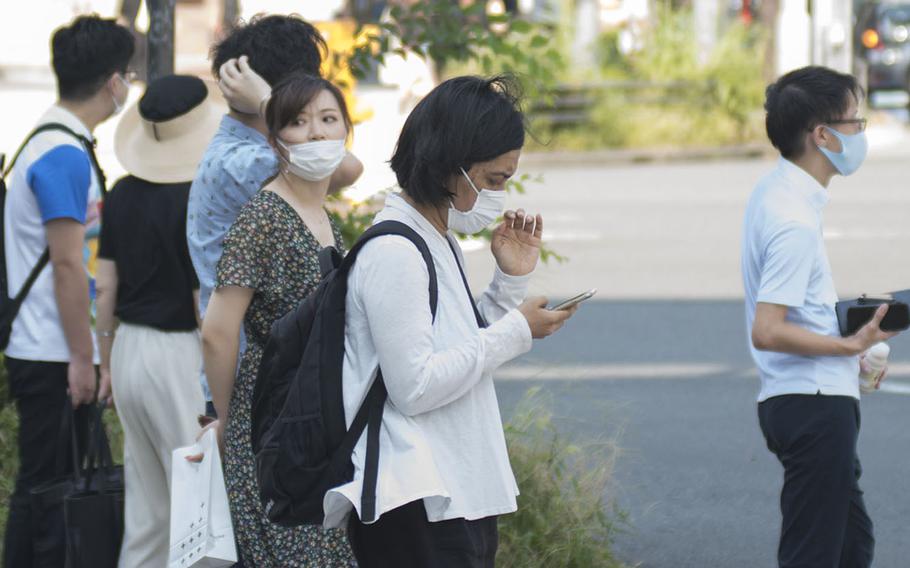 Buy Photo
People wait to cross an intersection in the Omotesando district of central Tokyo, Aug. 14, 2020. (Akifumi Ishikawa/Stars and Stripes)

TOKYO — The U.S. military in Japan reported three new coronavirus cases Tuesday as the number in the capital city bumped up to nearly 200.

The Tokyo Metropolitan Government reported 182 new cases Tuesday, according to the public broadcaster NHK, more than the previous day’s 95 but still below the most recent daily high of 339 on Thursday.

Tokyo has reported 19,610 infections during the pandemic as of Tuesday, according to NHK. As of Monday, 352 people have died due to the virus, according to the metro government website.

On Okinawa, the Marine Corps reported three new cases Tuesday morning, one at Marine Corps Air Station Futenma and two at Camp Schwab, according to a Facebook post by Marine Corps Installations Pacific.

All three were discovered during testing while the patients were in a 14-day quarantine, according to the post. U.S. military personnel must test negative for the coronavirus before leaving isolation.

Okinawa prefecture, home to the bulk of U.S. forces in the country, reported 32 new infections Tuesday, the sixth day in a row below 50 new daily cases, according to a prefectural public health spokesman.

The prefecture also reported four deaths due to the coronavirus late Monday, all patients between 70 and 90 years old. Twenty-three people have died on Okinawa so far from the pandemic.

“We had tested around 1,858 cases by chasing the close contacts from active patients last week and around 700 cases at local hospitals and clinics per doctors’ order,” the official said.

“Our number goes higher when we try to contain a cluster case by testing aggressively,” he said.

Japanese government officials traditionally speak on condition of anonymity as a condition of their employment.

The prefecture is not planning any further mass testing like it did in Matsuyama, the entertainment district of Naha city, anytime soon because it cannot afford the needed manpower, the spokesman said. The prefecture tested more than 2,000 workers and customers in the district.