Neil’s Pub in Mackenbach is open for takeout 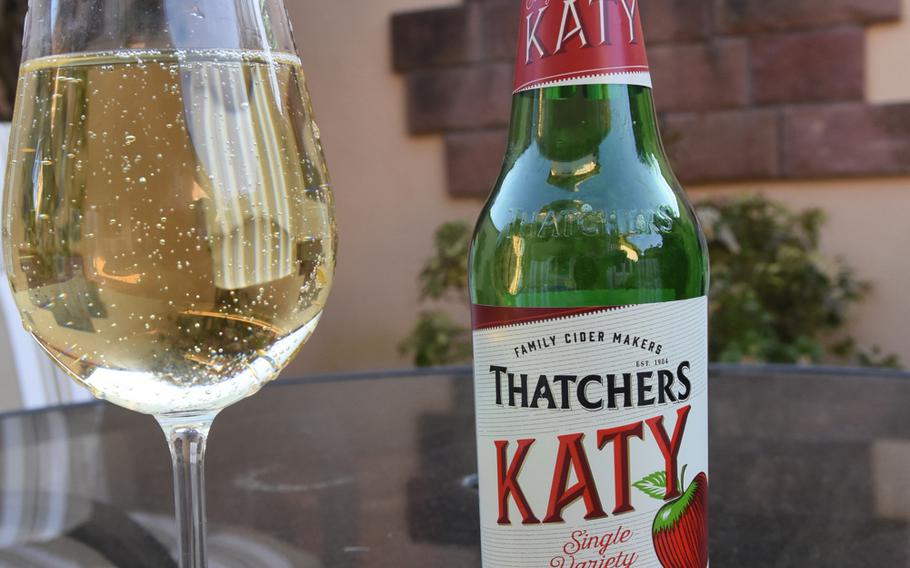 Buy Photo
Thatchers Katy cider is among the refreshing English ciders and other drinks available by the bottle for takeout at Neil's Pub in Mackenbach, Germany. (Jennifer H. Svan/Stars and Stripes)

Buy Photo
Thatchers Katy cider is among the refreshing English ciders and other drinks available by the bottle for takeout at Neil's Pub in Mackenbach, Germany. (Jennifer H. Svan/Stars and Stripes) 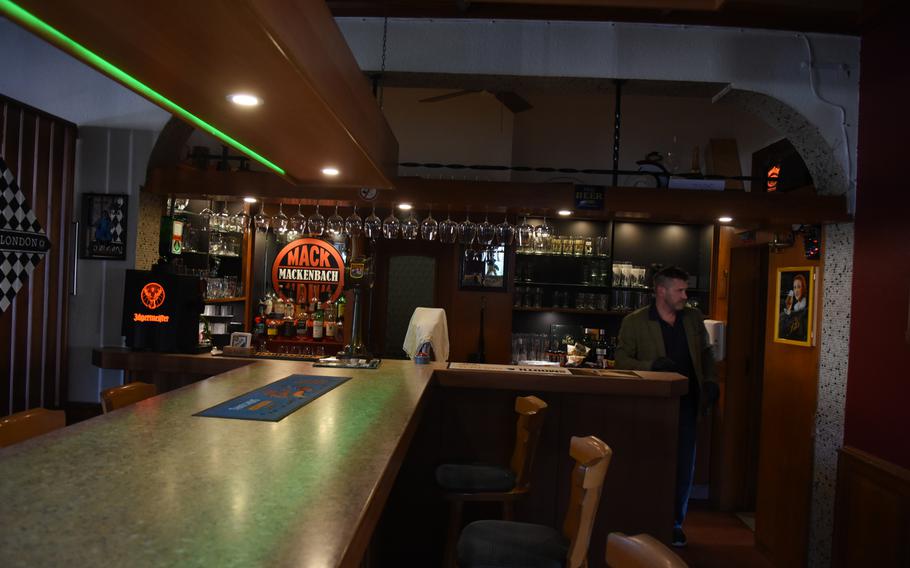 Buy Photo
Neil Burton, the owner of Neil's Pub in Mackenbach, Germany, stands behind an empty bar inside his restaurant. The pub is only doing takeout during the evening hours from Tuesday to Saturday while coronavirus restrictions remain in effect. (Jennifer H. Svan/Stars and Stripes) 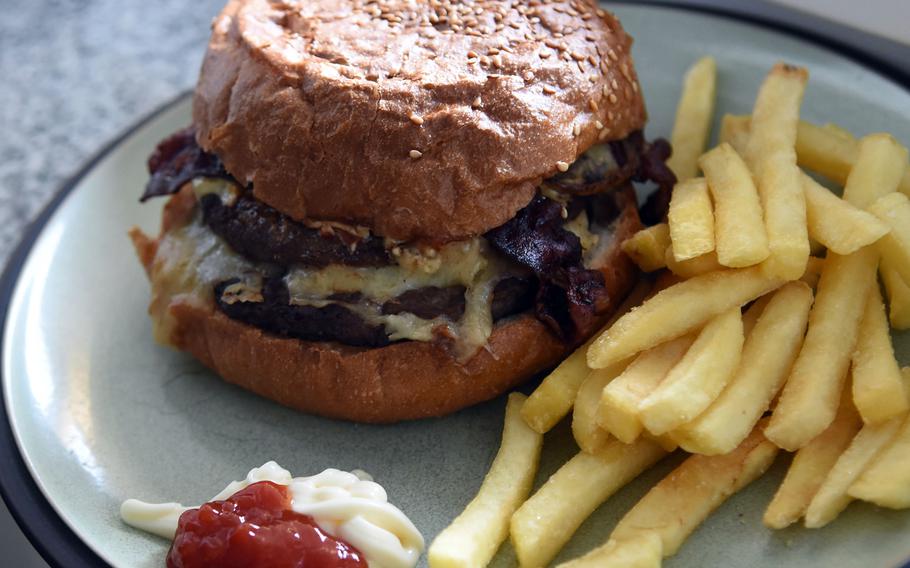 Buy Photo
A Burtonburger from Neil's Pub in Mackenbach, Germany, available for takeout, can satisfy a hearty appetite with its two beef patties and generous toppings. (Jennifer H. Svan/Stars and Stripes) 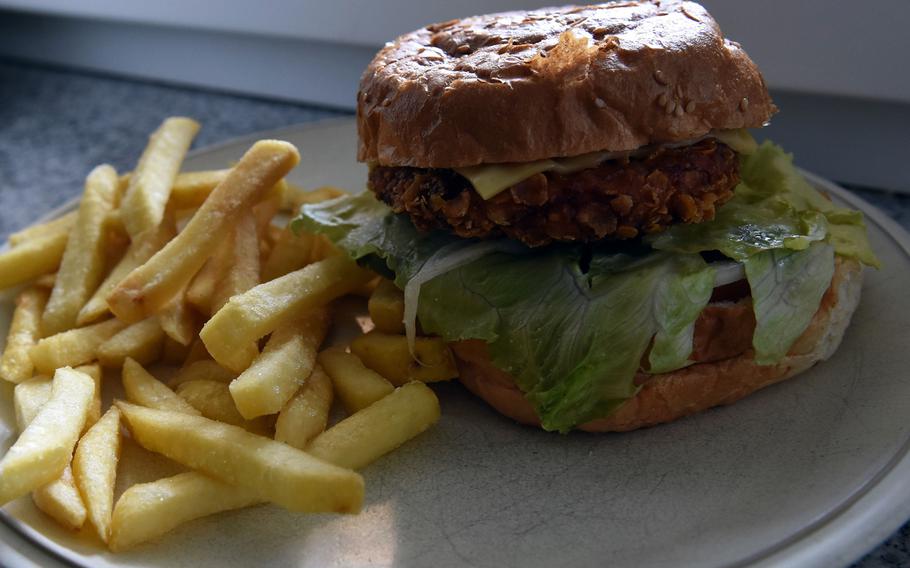 Buy Photo
The crispy chicken burger from Neil's Pub in Mackenbach, Germany, is a tasty alternative to beef. The restaurant offers a full takeout menu of pub and other fare while coronavirus restrictions remain in effect. (Jennifer H. Svan/Stars and Stripes) 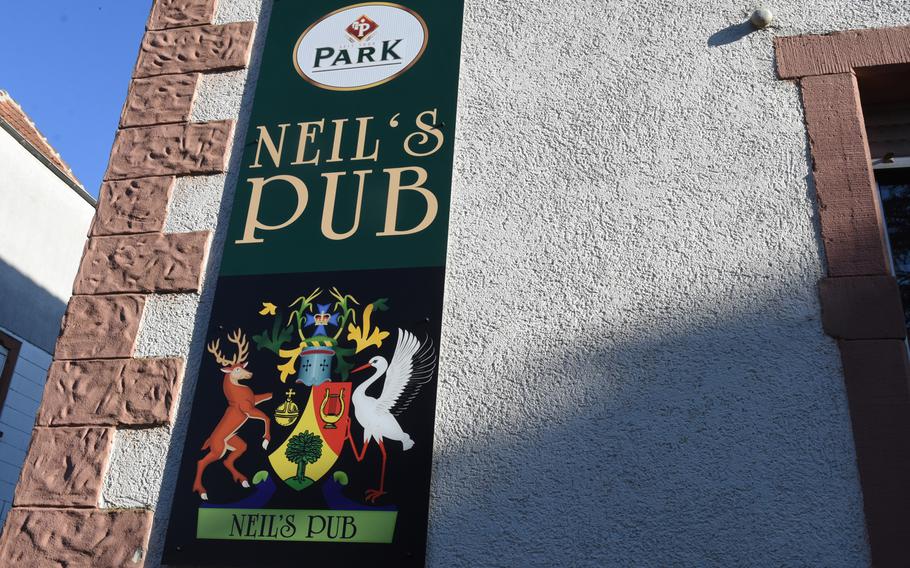 Buy Photo
Neil's Pub is the new name for the former Mack Du's in Mackenbach, Germany. Neil Burton and his family took over the pub about a year ago. (Jennifer H. Svan/Stars and Stripes) Buy Photo
A customer picks up takeout from Neil's Pub in Mackenbach, Germany. The pub offers hamburgers, pizza, salads and specials for takeout in the evening from Tuesday to Saturday. (Jennifer H. Svan/Stars and Stripes)

The former Mack Du’s on the east side of Ramstein Air Base in Mackenbach is now Neil’s Pub, but customers might not have noticed the name change.

Current owner Neil Burton and his family had planned a party for the end of March to celebrate the new name and the one-year anniversary since taking over the pub, but then the coronavirus hit.

The party was put on hold, but a new sign is up while Burton keeps the pub open for a few hours each evening for takeout.

“We almost made it to the one-year anniversary,” Burton said, while working the takeout window at the back of the pub on a recent weekday night.

“It’s been tough,” he said of the restrictions imposed on restaurants as a result of the virus, “and I don’t know when this will finish.”

Despite the limitations, pub fare works well as takeout and the restaurant is still able to offer a full menu, including its lineup of hearty burgers with their own names: the Mackenburger, the Burtonburger and the Brexitburger.

You can’t go wrong with any of these, as long as you’re pretty hungry. The Mackenburger has beef, bacon, jalapenos, onion, pickles, tomato, mozzarella cheese and a special sauce, while the Burton packs two beef patties, English cheddar and pepper jack cheese, bacon and a spicy sauce.

The Brexit takes it to the next level, with a beef patty and crispy chicken, along with all the fixings and a British brown sauce.

On a recent weekday when there was no time to cook due to teleworking and online school, my kids and I picked up a cheeseburger, similar to the Mackenburger but with American cheese; the Mackenburger; and the crispy chicken burger, a fried filet of chicken breast with pepper jack cheese, lettuce, tomatoes, onions and spicy ranch dressing.

We devoured all three, as well as the fries we ordered as sides. The Brexitburger comes with onion rings. There’s also a schnitzel burger, with pork, of course, and pizza.

The pub also this month brought back its salads, including the crispy chicken, Italian and Neil’s salad — the last includes ham, gouda and feta cheeses, jalapeno and a house ranch. The restaurant also offers various specials for takeout, such as pasta with homemade spicy bell pepper and cheese sauce.

Some of the pub’s English ciders, such as Thatchers Katy, can be purchased by the bottle at the takeout window.

Burton said he’s looking forward to opening the pub up again, whenever that time comes. Inside, the bar and tables are empty, and no one’s used the jukebox, pool table and darts for some time. The restaurant hosts occasional whisky tastings — Burton says he has about 16 different Scottish whisky varieties — and he hopes to have them again, along with a gin-tasting night and special events in the beer garden he’s improved.

Hours: Takeout only from 5 p.m. to 8 p.m. Tuesday to Saturday, due to coronavirus restrictions

Information: To place an order, call or Whatsapp at 0176-8777-6702. For PayPal, use burt72@sky.com; contactless cash payments are available. On Facebook, search for Neil’s Pub.