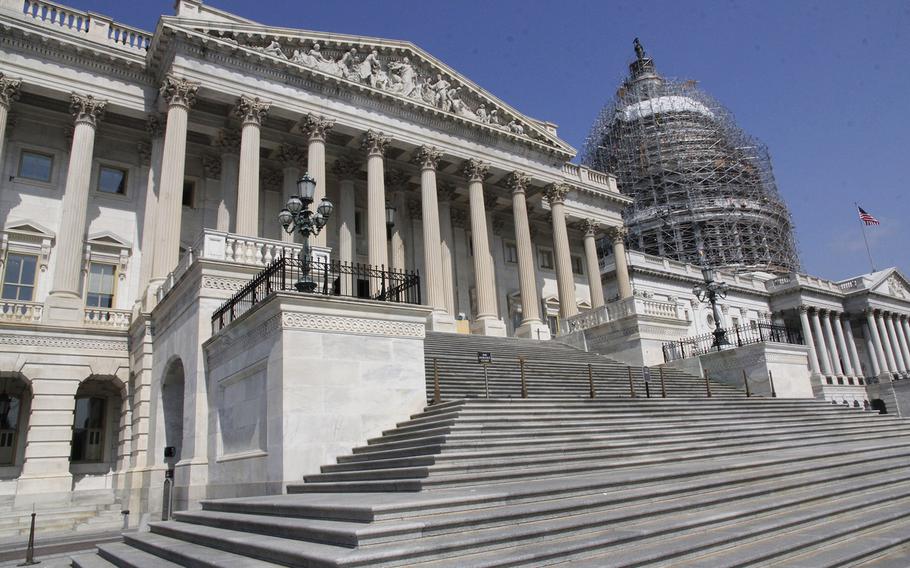 WASHINGTON — An annual bill setting Defense Department policy has passed the House and now must withstand Senate scrutiny and a possible vote Tuesday despite a lingering threat of a White House veto.

The bill has $515 billion for national defense and $89 billion that will go into an overseas war fund. It also has a variety of military personnel reforms, including an historic overhaul of the 20-year retirement system, reductions in headquarters staffing, and hikes in Tricare prescription fees.

But it faces tough opposition from President Barack Obama and Democrats in Congress who want federal spending caps lifted and oppose a Republican attempt to circumvent the limit on defense by pumping more than $38 billion for daily military operations into the emergency war fund, called Overseas Contingency Operations.

“There is a very easy fix, take it out of the OCO and put it in the base budget … what we don’t support is maintaining the budget caps through an obvious budget gimmick,” Rep. Adam Smith, R-Wash., the ranking member on the Armed Services Committee, said Thursday during debate in the House.

The bill had its first vote in the House on Thursday after being introduced this week and passed 270-156, with some members not voting.

Now, it must pass the Senate, where it is likely to face similar Democratic opposition.

Senate Majority Leader Mitch McConnell, R-Ky., put the annual bill, called the National Defense Authorization Act, on the chamber schedule and lawmakers might bring it up for a vote Tuesday.

On Thursday, House Republicans successfully urged passage, saying the military needs support from Congress with growing instability around the world. But they were not able to get the 290 votes needed to protect it from a presidential veto.

Obama has said he will veto the military bill because it skirts harmful spending caps by using the OCO fund, but it does not lift spending limits on other parts of the federal government.

Congress has been unable to strike an agreement to remove spending limits that date to 2011 and a political fight over raising the U.S. debt ceiling. Without a “grand bargain” solution and use of the OCO fund, the defense budget faces deep cuts that the military has said would be damaging to national security.

If passed, the NDAA would overhaul 20-year pensions into a blended system with 401(k)-style accounts for all new servicemembers. They would automatically have 3 percent of their pay placed into a Thrift Savings Plan account with a Defense Department match equal to 1 percent of their pay.

Also, the DOD would be pressed to reduce headquarters, administrative and support staff by 20 percent and cut $10 billion from those areas by 2019.