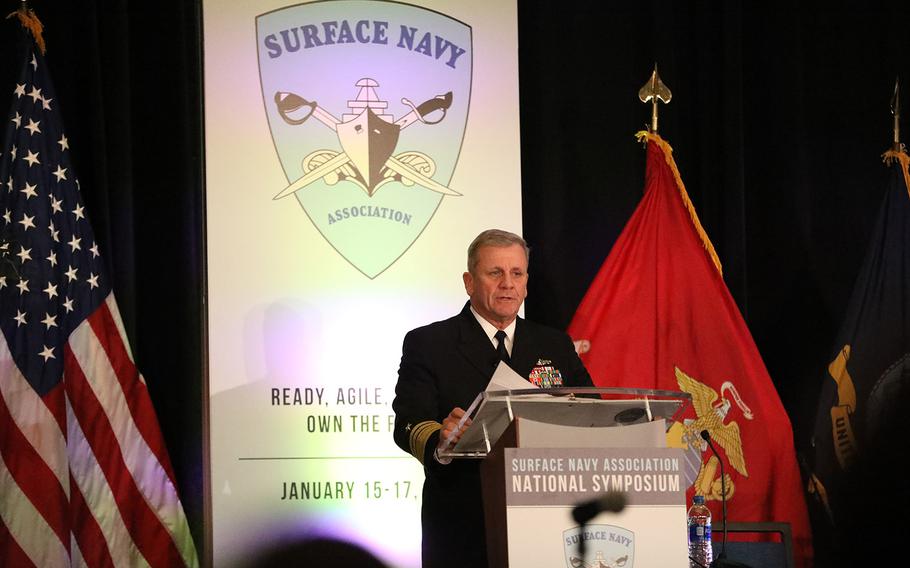 ARLINGTON, Va. — The competition for power from China and Russia is pushing the U.S. Navy’s Surface Forces to focus on performance and winning the challenges that face the U.S.

Today’s strategic environment and how it is shaping the Navy’s tactics and shipbuilding are similar to the Cold War between the U.S. and the Soviet Union, said Vice Adm. Richard Brown, commander of Naval Surface Forces/Naval Surface Force U.S. Pacific Fleet.

“The lesson we learned from the Cold War was that we had to be ready to fight now,” he said Tuesday during a speech at the Surface Navy Association’s 31st National Symposium in Arlington, Va. Yet today’s fight for power “could be an even sterner test than the Cold War,” he said.

To meet this challenge, the Navy’s surface forces must pivot toward a culture of excellence, not compliance, according to Brown, to be “the best of the best.”

“Compliance is important, don’t get me wrong. It’s what’s needed to build a culture of excellence. It’s the foundation. But compliance is about inspections,” he said. “Excellence is about superior performance and winning.”

Excellence also demands urgency, he said, and that can be seen in several strategies, including the 2018 Defense Department’s National Defense Strategy.

It names China and Russia as long-term strategic competitors, pointing out China’s use of “predatory economics to intimidate its neighbors while militarizing features in the South China Sea,” and Russia’s violations of nearby borders as well as their use of “veto power over the economic, diplomatic, and security decisions of its neighbors.”

“The common theme in all these strategies is that they are maritime strategies … that call for sea control whenever and wherever we need it,” Brown said. “Requiring our Surface Navy to deter but if required, fight and win the battle for sea control now in an age of great-power competition.”

Brown listed some of the priorities that will be necessary to be ready, including unmanned surface vessels, integrated combat systems and full integration of the F-35B into the fleet.

Brown also called on commanding officers “to seize the initiative, and to be confident, sensible risk-takers, because winning in combat demands it.”

The symposium continues through Thursday.