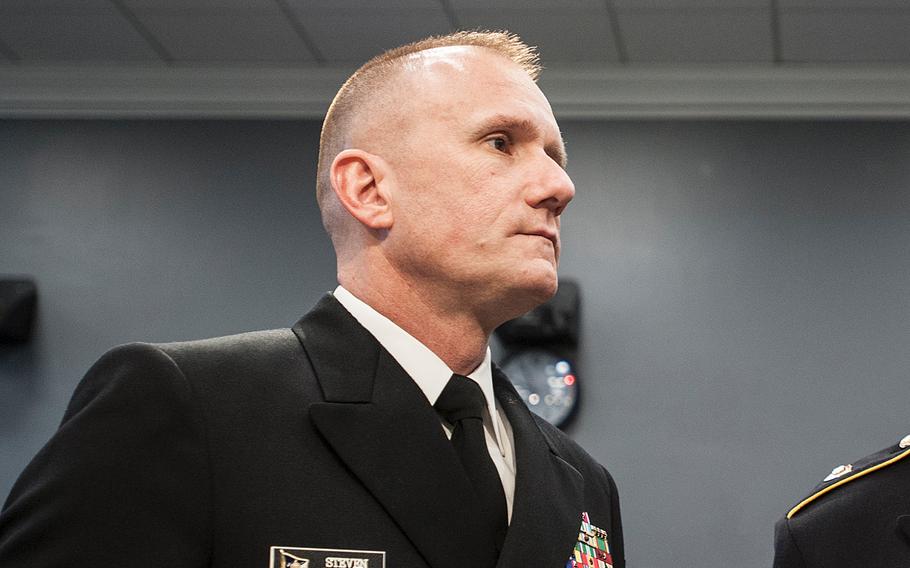 WASHINGTON – The Navy said it would complete its investigation into Master Chief Petty Officer of the Navy Steven Giordano after he announced Thursday that he would retire amid the probe into allegations he fostered a hostile work environment in his Pentagon office.

In a message to the Navy’s force, Giordano said he would leave to “avoid distraction” as the Navy inspector general’s office completes its misconduct investigation. He had served as the Navy’s top enlisted sailor since September 2016 and had taken leave during the IG inquiry.

“I have informed the chief of naval operations [Adm. John Richardson] that I intend to step aside and submit my retirement request, in order to allow the CNO, our [enlisted leadership], and our sailors to continue to move forward with the initiatives we have begun,” Giordano wrote Thursday on the Navy’s Facebook page. “The success of our Navy is not about one person or one individual, but rather the collective fighting spirit that has defined us over the last 242 years. It has been an honor to have been part of that team.”

“I appreciate his recognition that the situation had become untenable,” the Navy’s top officer wrote on his public Facebook page.

The investigation was initiated last month after a formal complaint by a sailor working for Giordano. The sailor alleged that Giordano created a toxic work environment and belittled people who worked for him, often demanding they perform menial tasks, Navy officials said.

Navy Capt. Darryn James, spokesman for Richardson, said the investigation had not been completed as of Friday and would continue even after Giordano retired.

He could face repercussions if the probe substantiates the alleged misconduct.

“The Navy takes all allegations of wrongdoing seriously,” James said.

In his note to the force, Giordano made no mention of the allegations against him. He wrote his tenure in the sea service was a “privilege” and an “honor.”

“My family and I have felt extremely blessed to have had you [sailors] in our lives over the 29 years,” he wrote. “My love for our Navy and our sailors is absolute.”

As the Navy’s senior enlisted leader, Giordano serves as a chief adviser to the chief of naval operations, develops policy and advocates for the sea service’s enlisted force.

Master chief petty officers of the Navy typically serve two-year assignments, which can be extended to four years.

On Friday, Richardson was set to begin the process to find a permanent replacement for Giordano, James said.

His temporary replacement, Smith, will retain his role as the senior enlisted leader for Navy Manpower, Personnel, Training and Education, a position he has held since January 2017.

“Master Chief Smith is an established leader and I thank him for accepting these important temporary duties until I select a new MCPON,” Richardson said in a statement. “He will represent our sailors and families well.”