National Guard vows to extend same-sex benefits in all states 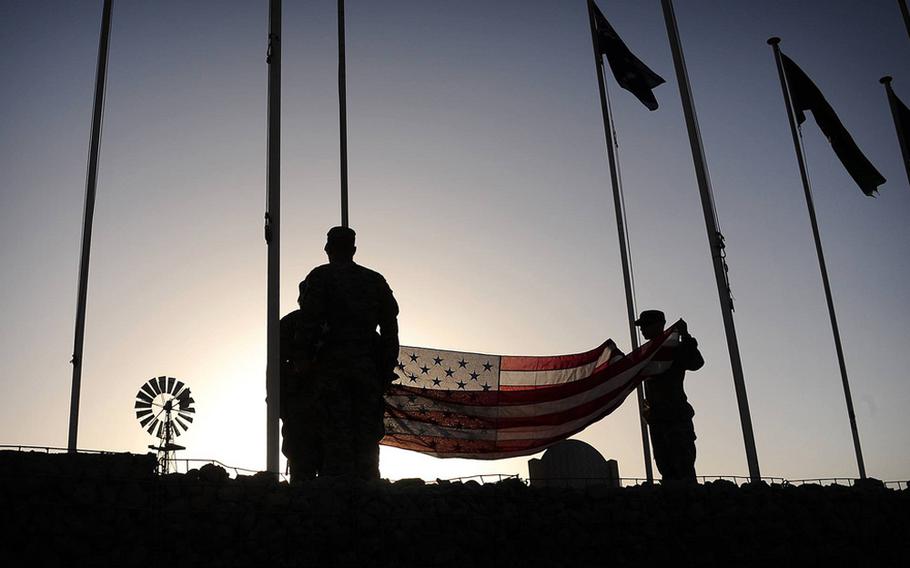 Soldiers with the California Army National Guard prepare to raise the American flag at Multinational Base Tarin Kowt in the Uruzgan province of Afghanistan, Aug. 5, 2013. (Jessi Ann McCormick/U.S. Army)

Soldiers with the California Army National Guard prepare to raise the American flag at Multinational Base Tarin Kowt in the Uruzgan province of Afghanistan, Aug. 5, 2013. (Jessi Ann McCormick/U.S. Army) WASHINGTON — The National Guard’s top officer said Tuesday that the number of states refusing to provide equal benefits to same-sex couples in guard units has dropped in recent weeks, but he promised to keep pushing until all states comply with Defense Department policies.

“We are adamant that same sex benefits will be equally extended,” just as they are to heterosexual couples in the guard, Army Gen. Frank J. Grass, who represents the guard on the Joint Chiefs of Staff, told reporters in Washington.

The issue came to a head recently in Texas, where a group that represents gay military spouses says the Texas National Guard is refusing to process a military housing allowance application for a same-sex couple, the Washington Post reported Tuesday.

Grass said he has been working the phones with National Guard commanders nationwide, and the issue now persists only in five states: Texas, Mississippi, Louisiana, South Carolina and Georgia.

In places where state constitutions bar recognition of same-sex marriage, officials have found workarounds, such as establishing federal processing centers where all guard members apply for benefits.

When talk turned to the future of the National Guard, Grass argued that the United States should retain a highly capable, well-equipped “ready reserve” force as it comes out of two long wars and enters a new age of budget cuts.

After a decade of fighting alongside active-duty soldiers and airmen, guard units train to the same standard and have a full complement of modern equipment, he said. Reverting to a pre-9/11 model of lightly equipped units doing little advanced training would surrender U.S. fighting capability, and changing course could cost more money than staying with the status quo, he said.

“It won’t take a lot of fiscal resources to be able to sustain what we have for years to come because we’re at that high level,” he said.

As the active military loses end strength, Grass said the National Guard hopes to attract many troops who are leaving, particularly highly experienced Army warrant officers and captains to fill shortfalls that exist.