N. Korea urges US to withdraw ‘hostile policy’ on eve of summit anniversary 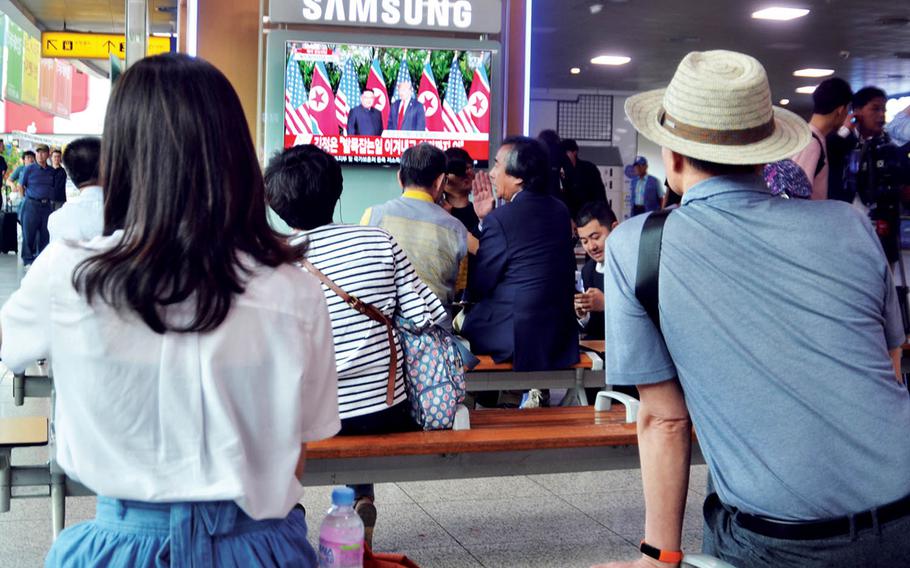 SEOUL, South Korea — North Korea called on the United States to “withdraw its hostile policy” on Tuesday as nuclear talks between the two adversaries remain deadlocked a year after the historic first summit between leader Kim Jong Un and President Donald Trump.

It was the latest such statement published on state-run media as the North signals growing frustration over U.S. refusal to agree to a reciprocal approach that includes rewards such as sanctions relief for steps toward disarmament.

“The arrogant and unilateral U.S. policy will never work on the DPRK, which values sovereignty,” the Korean Central News Agency reported, using the initials for the North’s official name, the Democratic People’s Republic of Korea.

It warned the four-point summit statement signed by Trump and Kim after their June 12 meeting in Singapore was in danger of “being a blank sheet of paper because the U.S. is turning a blind eye to its implementation.

“Now is the time for the U.S. to withdraw its hostile policy concerning the DPRK,” it added.

The comments came as Trump plans to travel to Seoul later this month to meet with South Korean President Moon Jae-in to try to get the talks back on track.

Moon, who has staked his legacy on establishing peace with the North, expressed optimism on Monday.

“I believe that we will be able to resume dialogue between the two Koreas and between the U.S. and North Korea in the near future,” he said during a joint press conference with his Finnish counterpart during a trip to Helsinki.

The stakes are high since the diplomatic process that began in force early last year reversed months of hostilities as the North conducted several nuclear and missile tests that showed it was making strong progress toward its goal of targeting the U.S. mainland with a nuclear weapon.

Kim and Trump also traded personal insults and threats of war before the president famously declared “we fell in love.”

But the North has been largely unresponsive since a second summit with the U.S. ended without agreement in late February in Vietnam. Kim has left the door open for more talks but in April gave Washington an end-of-year deadline to show more flexibility.

The two leaders agreed in Singapore to establish a new relationship, to join efforts in building a “lasting and stable peace regime” and to work toward “complete denuclearization” of the Korean Peninsula.

The final point was a commitment to recover the remains of troops killed in the 1950-53 Korean War, which ended in an armistice instead of a peace treaty, leaving the peninsula divided by a heavily fortified buffer zone.

Here’s a look at where things stand on the first anniversary of the Singapore summit.

The relationship Trump and Kim insist they maintain a good relationship and North Korea’s state-run media have been careful not to criticize the president but to blame his aides for the failures. Trump said as recently as Wednesday that he believes North Korea “would like to make a deal.” He has said there’s no rush.

Peace regime Many believed that the U.S. might agree during the summits to a declaration formally ending the war. While such a move would be largely symbolic, critics fear it would be a first step toward a peace treaty that could undermine the rationale for maintaining some 28,500 American troops in South Korea. With overall talks stalled, the idea has largely fallen off the radar.

Denuclearization The promise in the Singapore summit statement was vague and the two sides haven’t been able to close the gap in their definitions of the word.

North Korea insists it should be rewarded for steps already taken, including a suspension of long-range missile and nuclear tests and the dismantlement of its main nuclear testing site. In explaining the collapse of the Hanoi summit, Trump said “we had to walk away” because of the North’s demands for sanctions relief.

Meanwhile, experts say satellite images show the North continues to improve its capabilities since it never agreed to stop, although U.N. Security Council resolutions ban the use of ballistic technology.

That idea was bolstered when Kim presided over two short-range missile tests in a span of five days last month. Trump has largely dismissed the launches, which technically didn’t violate Kim’s self-imposed moratorium.

Remains This is the only commitment that has seen tangible progress.

More than a month after the Singapore summit, North Korea returned 55 cases it said contained bones and other items belonging to American servicemembers killed in the war. So far six American soldiers have been identified from those remains.

But the Pentagon announced last month that it had given up on plans to resume joint searches inside North Korea due to the diplomatic stalemate. South Korea, meanwhile, unilaterally resumed excavations in the Demilitarized Zone on April 1 as part of an inter-Korean agreement reached in parallel with the U.S.-North Korean talks.

Military drills Trump announced after the summit that he was suspending joint “war games” held annually by the U.S. and South Korea. It wasn’t in the final summit statement and Trump also complained the drills are too expensive. But the decision was seen as a major concession to the North, which considers the exercises a rehearsal for an invasion.

The allies have since canceled the major exercises that usually bring thousands of extra American troops to the peninsula in the spring and the fall. Instead the joint training has been scaled back and rebranded.

North Korea still regularly complains about the drills, saying it won’t be fooled by allied efforts to “conceal the aggressive, offensive and confrontational nature of their hostile acts” by changing the names.