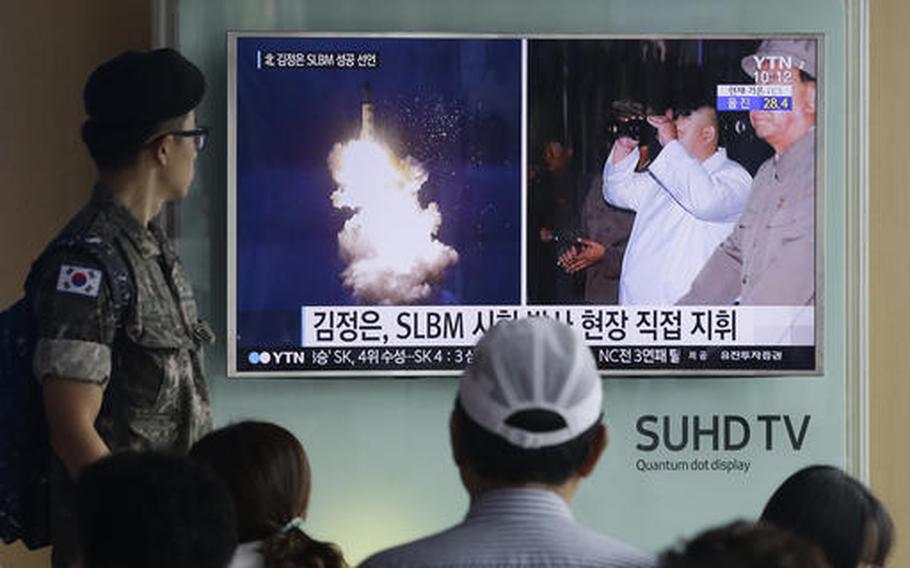 SEOUL, South Korea — North Korea test-fired three ballistic missiles that flew about 620 miles Monday before crashing off the coast of Japan in a show of force as G-20 leaders met in China, military officials said.

The presumed Rodong missiles were launched shortly after noon from the western town of Hwangju and traveled across the peninsula before landing some 250 miles inside Japan’s air defense identification zone, according to South Korea’s Joint Chiefs of Staff.

The U.S. and South Korea were still investigating, but the launches were clearly a violation of U.N. Security Council resolutions banning the North’s use of ballistic missile technology, the statement said.

“It is considered part of the North’s armed protests aimed at maintaining military tension on the Korean peninsula by showing off its nuclear and missile abilities,” it said, adding the North was taking advantage of the G-20 summit to gain attention. “Our military is fully prepared to deal with North Korean provocations.”

The missile tests also occurred days after the U.S. and South Korea concluded nearly two weeks of war games, which angered the North because it considers them a rehearsal for an invasion.

The White House said the United States was closely monitoring what it described as the latest provocation by North Korea. President Barack Obama was in China meeting with the leaders of France and Germany around the time of the launch, according to The Associated Press.

It was the latest in a series of missile tests conducted by the North despite U.N. resolutions prohibiting it from using ballistic missile technology. The U.N. Security Council, including China, tightened sanctions against Pyongyang after it staged its fourth nuclear test in January and launched a satellite into orbit a month later.

Many of the earlier missiles failed to launch or exploded in mid-air, but recent efforts have flown greater distances, leading experts to warn that Pyonyang is learning from its mistakes and making technical progress toward its stated goal of developing a nuclear weapon that could reach the U.S. mainland.

The G-20 leaders of advanced and emerging economies were wrapping up their two-day summit in the Chinese city of Hangzhou. China, the North’s closest ally, has grown increasingly impatient with its fellow communist country’s defiance in pursuing a nuclear weapons program.

Beijing signed off on the recent round of sanctions, but there have been questions about its commitment to enforcing them, which has been an issue in the past. Beijing has been angered by plans to deploy an advanced U.S. missile-defense system, known as THAAD, in South Korea.

For his part, Xi reaffirmed China’s commitment to the denuclearization of the Korean peninsula but also stated his opposition to THAAD. Washington and Seoul insist THAAD is needed solely to defend against the growing missile threat from the North.

South Korea’s military also has been on alert for action by North Korea ahead of the 68th anniversary of its government’s establishment on Friday.

While the impoverished North’s motives for keeping tensions on the front burner all year aren’t clear, there is speculation that leader Kim Jong Un is still trying to consolidate power nearly five years after taking over following his father’s death.

His string of purges, including executions, have continued, and a top-level diplomat recently defected from the country’s embassy in London.