MMP near Capodichino serves good pizza for less than $7 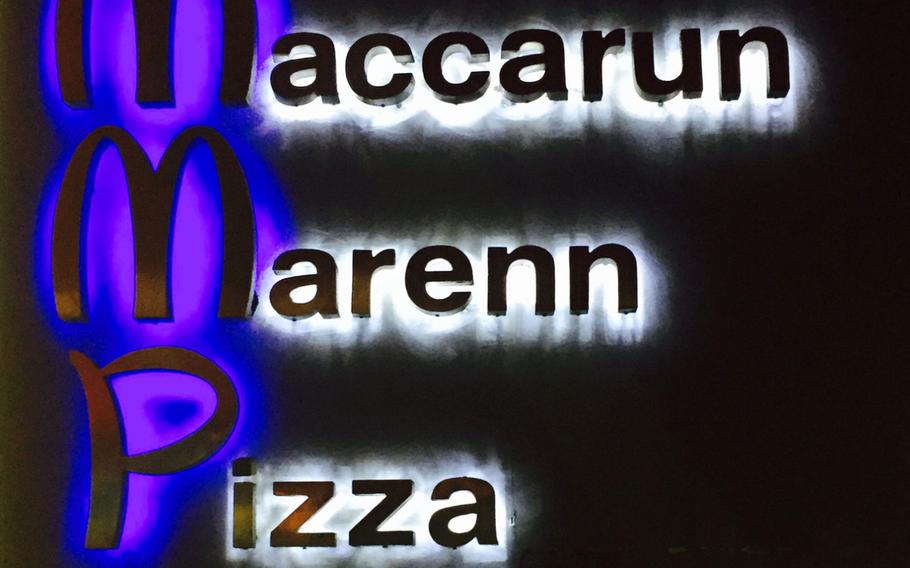 Buy Photo
MMP's neon sign with the English "pizza" telegraphs its proximity to a U.S. Navy base, yet it is predominantly Italian, from the food to the patrons to the servers who speak little English. (Scott Wyland/Stars and Stripes)

Buy Photo
MMP's neon sign with the English "pizza" telegraphs its proximity to a U.S. Navy base, yet it is predominantly Italian, from the food to the patrons to the servers who speak little English. (Scott Wyland/Stars and Stripes) 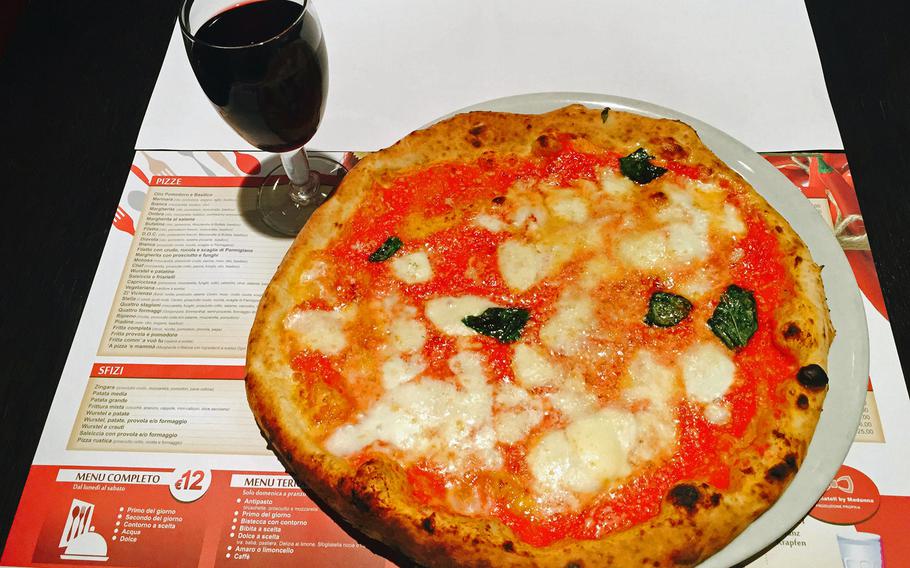 Buy Photo
A glass of tasty red wine and a big, wood-fire-baked pizza with can be had at MMP's for less than $7. And the eatery is a short walk from the Capodichino base. (Scott Wyland/Stars and Stripes) 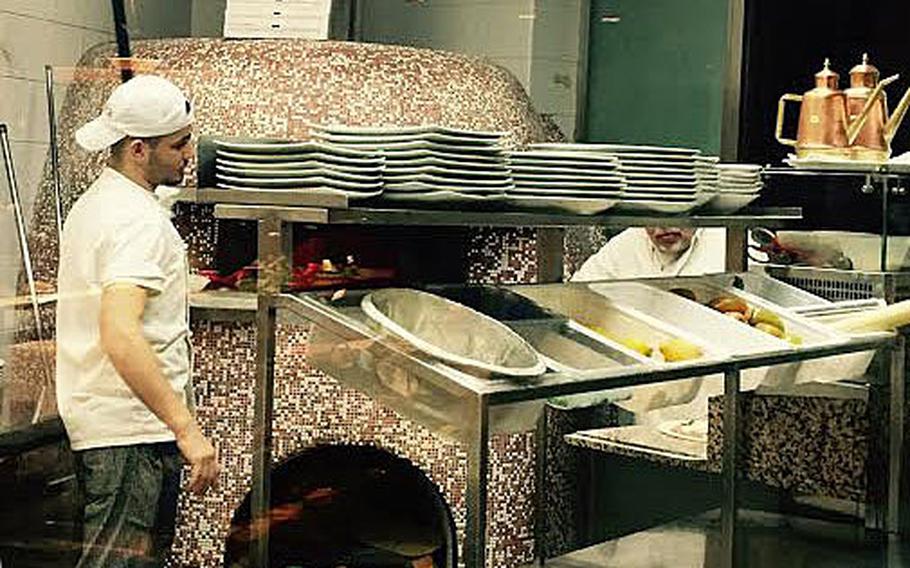 Buy Photo
A cook prepares to remove pizza from a wood-fired oven at MMP's near the Capodichino Navy base in Naples. The restaurant has a diverse food selection that narrows as the evening wears on. (Scott Wyland/Stars and Stripes) 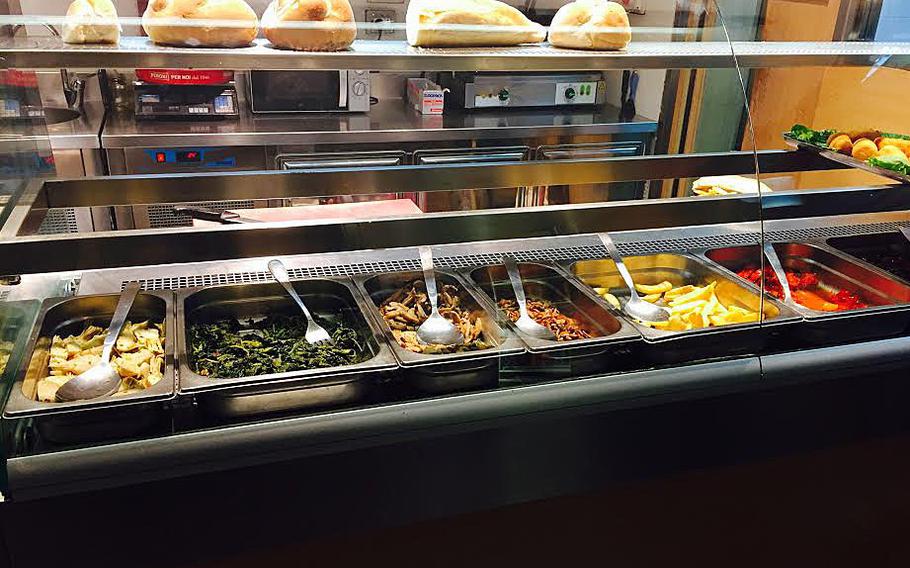 Buy Photo
Aside from pizzas, pastas and paninis, MMP's near the Capodichino Navy base offers a buffet of vegetables and fresh-baked breads. (Scott Wyland/Stars and Stripes) 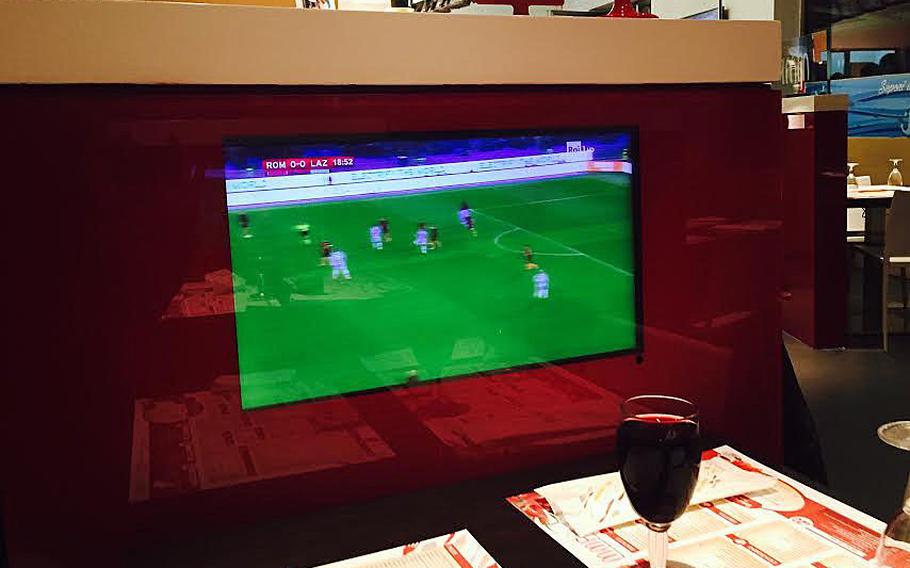 Buy Photo
Every table at MMP has a muted TV that's set to whatever channel the restaurant's staff is watching. It could be a soccer game or a soapy Italian drama you can take in or ignore. (Scott Wyland/Stars and Stripes)

Maccarun Marenn Pizza Ristorante & Pizzeria, or MMP, will never rank high in Naples’ pantheon of pizzerias, but it has three things strongly in its favor: delicious wood-fire-baked pizzas at rock-bottom prices, generous portions and a short stroll from the Capodichino naval base.

MMP’s green awnings are the only swatch of color in a grimy, near-deserted block that most drivers blow through while going to and from the base or the airport. The two M’s in its logo, fashioned in the same style as McDonald’s golden arches, and the use of “pizza” instead of “pizze” made me wonder whether it was a faux Italian eatery catering to U.S. servicemembers.

I half-expected to see burgers and barbecued wings on my first visit. I soon realized MMP might have a thin Americanized veneer, but it’s pure Italian at heart, from the Italian-prepped cuisine to the main menu written in Italian to the server who barely speaks English yet has jovial fun with the language barrier.

MMP is not elegant. The decor is a tacky blend of red and white. Placemats are paper, silverware and a paper napkin come in a plastic wrapper, and each table’s divider has a flat-screen TV with no way to change channels. You view what the staff is watching, whether it’s a soccer match or an overwrought Italian drama.

Yet the kitsch is part of its charm. And it all seems beside the point when you’re served a gigantic pizza with a light, tender crust, a tasty basil sauce and mozzarella that melts like butter in your mouth. Add a glass of more-than-adequate red wine and the total is 6.50 euros ($7). I experienced reverse sticker shock.

The priciest pizza, the capricciosa, costs 7 euros ($7.50). It has tomatoes, mozzarella, mushrooms, ham and artichokes. Non-pizza meals run between 3 and 5 euros ($3.20 to $5.35). They include antipasto dishes as well as assorted vegetables or meats served with a hefty glob of mozzarella.

MMP’s menu selection narrows in the evening. No fish is available after about 6:30 p.m. And after 8 p.m. the server nudges you to the easier-to-prepare foods, such as pizza and antipasto. Quirks aside, MMP is a worthwhile stop.

You’re unlikely to find any place in America near a military base that serves pizza a tenth this good, and for less money than you’d pay at Pizza Hut.

Information: (+39) 081 751 1319. Limited parking around the restaurant, including street-side. MMP can be found on Facebook, where patrons comment, mostly in Italian.