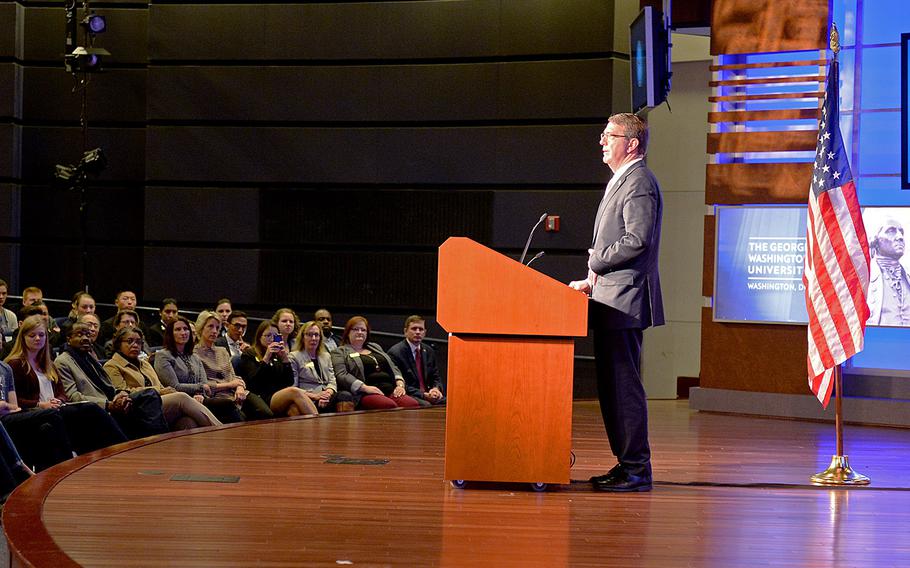 Secretary of Defense Ash Carter announces the first phase of personnel reforms in his Force of the Future initiative at George Washington University on Nov. 18, 2015. (Clydell Kinchen/U.S. Army)

Defense Secretary Ash Carter unveiled the “first tranche” of his Force of the Future initiatives Wednesday. They included none of the costly or controversial ideas that his personnel chief, Brad Carson, had brainstormed with Pentagon and private sector personnel experts since last April.

No end to the up-or-out promotion system.

No dramatic “on-ramps” to military service at mid grade.

No structural changes to the military pay chart.

No expansion of parental leave for military or civilian employees.

No new diversity tools like requiring that 25 percent of servicemembers on selection and promotion boards be women or minorities.

No two-year test of a race-and-gender-blind promotion process, removing names, photos and pronouns from promotion packets.

No “mother” rooms on every base to ensure comfort while nursing.

No changes aimed broadly at enhancing quality of life for families.

The initiatives instead are no-cost or low-cost commitments that the Defense Department will work smarter and try more modern ideas for attracting, nurturing and assigning its military and civilian work forces. The theme is more aggressive talent management.

It will use social media, data analytics and exit surveys to better identify talent or to learn why good people leave. It will encourage more frequent interactions with industry, softening the perception of a bureaucracy resistant to change. It will double the number of internships with industry and allow more sabbaticals from service life — what Navy calls its career intermission program — so members can start families, seek degrees or care for an ill parent as civilians — before resuming long-term career goals.

“While the military cannot and should not replicate all aspects of the private sector, we can and should borrow best practices, technologies and personnel management techniques in commonsense ways that work for us,” Carter said.

His package of initiatives, at least so far, falls far short of being “the most far-reaching personnel reforms … since the all-volunteer force,” as one senior defense official tried to spin it Wednesday. After all, only one new initiative — more career sabbaticals — would require legislation.

The Force-of-the-Future actions are but a ripple of change compared to the Goldwater-Nichols Department of Defense Reorganization Act of 1986 or the Defense Officer Management Act of 1980. Indeed Congress and federal courts continue to drive the most critical personnel policy changes.

Two years ago Congress created the Military Compensation and Retirement Modernization Commission and used its findings this year to reform military retirement for future generations. Defense officials only must implement the sweeping changes therein by January 2018. And next year congressional leaders promise to reform the military health system.

Against such shifts, Carter’s plans appear pale and scattershot.

“I was disappointed that there weren’t more things related to the current military, especially families,” said Joyce Wessel Raezer, executive director of the National Military Family Association, after key advocacy groups were briefed on the plans. “The only thing mentioned really family related was [more members] choosing their own reason to take a sabbatical. In terms of the currently-serving force, there wasn’t a whole lot.”

Carson, acting undersecretary of defense for personnel and readiness, did propose more sweeping or cutting-edge changes but failed to win service support for them. Also the projected costs were deemed worrisome.

By the time Carter unveiled Force of the Future details in speech at George Washington University, he decided to add some heft by including the new retirement plan with government matching and early vesting in a portable 401(k)-like Thrift Saving Plan. That’s old news to the current force.

Carter perhaps discovered over recent months that it’s easier to talk of modernizing military and federal civilian personnel systems than to make substantive changes. That’s particularly true in an era of tight budgets, when service branches are satisfied with their own personnel initiatives and when the administration pressing for change is entering its final year.

In a Nov. 18 memorandum to service secretaries, the chairman of the Joint Chiefs and defense agency directors, Carter recounted his Force of the Future journey so far, explaining that Carson “led an ambitious and trenchant effort over the past five months” and “exceeded my expectations, providing a package of bold proposals that could change departmental personnel policies and procedures in unprecedented ways. Several [would] expand on what the services are already doing to modernize their personnel practices.”

Others, however, “are new and complex,” Carter wrote, “and require additional study to ensure they are implemented in a deliberate and durable manner.” So he tasked his deputy secretary and the vice chairman of the joint chiefs to lead a Force of the Future Implementation Group. Meeting twice weekly it has been assessing Carson’s proposals against wartime readiness needs and cost. Carter wants the work completed by Dec. 15.

Working with the services, the implementation group recommended the so far unremarkable ideas that Carter approved and unveiled this week. Other highlights of those include:

Expanding the department’s corporate fellows program to increase the number of service members gaining private sector work experience. Establishing a Defense Digital Services office to increase digital innovation by inviting entrepreneurs to work for the department for short periods or on special projects to leverage their expertise. Creating a task force to streamline the transition process between active duty and service in reserve components. Piloting department-wide a talent-based assignment matching system that would allow service members to billboard skills and talents into a database where commands also would post military job openings and requirements. Commands and individuals then could match individual talent with open jobs. The Army already successfully has tested such a concept.To comment, write Military Update, P.O. Box 231111, Centreville, VA, 20120 or email: milupdate@aol.com or Twitter: @Military_Update