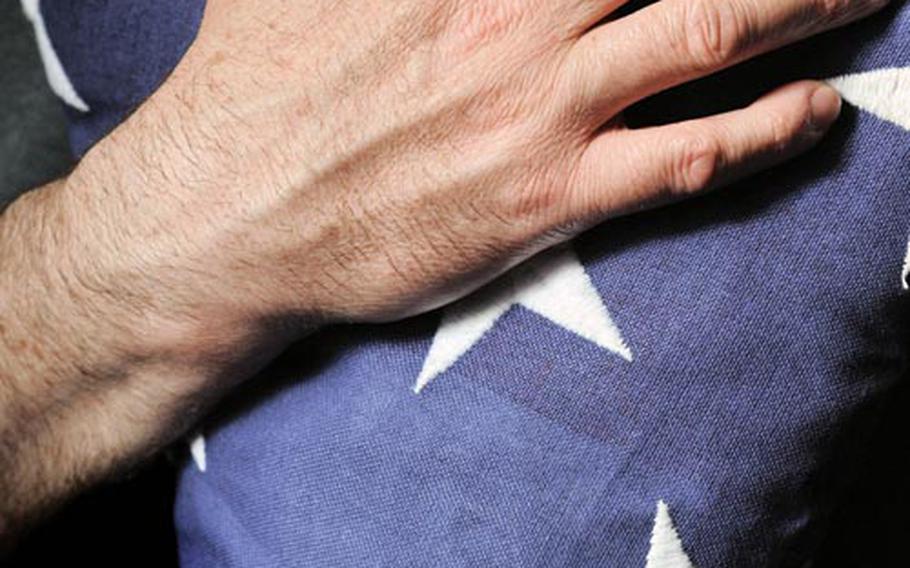 Cheryl Harris had two sons deployed to Iraq, so she knew it had to be terrible news when three soldiers knocked on her door outside Pittsburgh on a freezing morning in January 2008.

&ldquo;I said, 'Tell me which one,' &rdquo; she recalled.

The casualty notification officers somberly relayed their message: It was one of her twin sons, Army Staff Sgt. Ryan Maseth, who had perished.

They couldn&rsquo;t provide any more information to Harris, nothing else to help the reeling mother absorb or even comprehend the shock.

&ldquo;Their job was to convey he died,&rdquo; Harris said. &ldquo;That&rsquo;s it. I actually for a brief period of time thought he&rsquo;d been murdered. That was even more horrible.&rdquo;

It wasn&rsquo;t until the next day that Harris was told that her son had been electrocuted in a shower, but still there were few details. Desperate for answers, Harris started hounding the Army&rsquo;s Criminal Investigation Command, and three weeks later, she found out that an electrical system had shorted out, killing Maseth in the shower at the Radwaniyah Palace Complex in Baghdad.

&ldquo;I don&rsquo;t think I would have been told that unless I had constantly pressured and questioned [the military],&rdquo; said Harris, who later filed a wrongful-death lawsuit against KBR, the contractor responsible for the wiring. &ldquo;They told me it was difficult to relay information from Iraq to the U.S. I said, &lsquo;How are you fighting a war?&rsquo;&thinsp;&rdquo;

At a time when American deaths in Afghanistan are steadily increasing as the tempo of the war intensifies, more families will inevitably have their lives forever altered when they answer that knock at the door. But for an institution that prides itself on uniformity, the military&rsquo;s casualty notification and assistance systems have at times proved frustratingly uneven.

Stars and Stripes reporters interviewed nearly two dozen families about their experiences with the casualty notification process, one of the most sensitive tasks the military must perform. Some reported as good an experience as possible in such circumstances, while others said the military made the worst time of their lives even more unbearable.

Families with troops who died in noncombat situations generally reported a harder time getting answers than those whose loved ones were killed in battle.

&ldquo;If there was one big thing I could change that would take some of the pain away, it&rsquo;s how families are treated after a loved one has died,&rdquo; Harris said.

Six years later, his mother, Kathy Spears, has nothing good to say about her family&rsquo;s notification and assistance experience.

&ldquo;I was walking out the door when he was walking up the driveway,&rdquo; she recalled. &ldquo;Your heart starts beating fast.&rdquo;

The soldier sent to break the news asked her if they could go inside, she said. That&rsquo;s when she knew.

&ldquo;You could tell he had never done this before,&rdquo; Spears said. &ldquo;He was reading off a 3-by-5 index card.&rdquo;

He gave her a number to call if she had questions.

&ldquo;But when we called, they didn&rsquo;t know anything,&rdquo; she said.

Days before the memorial, the military couldn&rsquo;t locate Wilson&rsquo;s body &mdash; something that appalled Spears, who spent 23 years in the Air Force.

&ldquo;We had this memorial service planned on a Thursday, and because they didn&rsquo;t know where his body was, we had to switch it to the next day,&rdquo; she said.

Still searching for more answers about how her son died, Spears said she met with Army officials a year later, but got only what she described as more vagueness.

The cruelest cut, she said, came on the first Memorial Day after Wilson&rsquo;s death, when a supplement with information provided by the military appeared in various newspapers featuring photos of every soldier who died in Iraq. A photo of Wilson&rsquo;s wife was mistakenly placed above her son&rsquo;s name.

&ldquo;I called up to say they had the wrong picture,&rdquo; she said. &ldquo;That sergeant who picked up the phone was so nasty to me. I had to point out that maybe if his son was killed over there, he&rsquo;d have a little more respect.

&ldquo;Besides them coming to the church and doing their 21-gun salute,&rdquo; she said, &ldquo;I have nothing good to say.&rdquo;

The casualty notification and assistance process has evolved with the wars in Iraq and Afghanistan.

After several incidents involving families who were failed by the system, the Army standardized training and certification in 2006. Before that, the training varied, with each garrison drafting its own protocols, according to Col. Deborah Skillman, chief of the Army&rsquo;s Casualty and Mortuary Affairs Branch.

One of those failures involved the 2004 death of 1st Lt. Kenneth Ballard, a 1st Armored Division tank officer.

From the moment his mother, Karen Meredith, learned of his death, she endured a series of mix-ups, oversights and omissions. She was initially told he was killed by enemy fire. It only later emerged that a gun on his tank accidentally discharged, killing the 26-year-old.

&ldquo;It was 15 months of hell,&rdquo; Meredith said of her quest to get answers.

In 2005, then-Secretary of the Army Francis Harvey met with Meredith to apologize. He ordered a new investigation of her son&rsquo;s case, and a revamping of the Army&rsquo;s casualty manual followed.

&ldquo;I think they understood the magnitude of the impact on families, and they knew they had to do something,&rdquo; Meredith told Stars and Stripes in 2006.

These days, only soldiers of the rank E-7 and above undergo the two-day casualty notification training, and they must pass an exam before they go on the job. They also are required to take annual refresher training.

Garrison commanders determine which soldiers will go through training &mdash; and personality plays a part in the decision.

&ldquo;Some soldiers are just not meant to do this job,&rdquo; Skillman said. &ldquo;And some people really know how to reach out to a family member and help them through the grief process.&rdquo;

The Navy&rsquo;s training program lasts one day, while the Air Force incorporates its casualty training into a leadership course. The Air Force also employs civilians for the follow-up casualty assistance work.

&ldquo;There weren&rsquo;t the standards in training that there are today,&rdquo; said Lt. Col. Rob McCaslin, of U.S. Army Europe&rsquo;s casualty assistance center. &ldquo;The Army can do some things wrong and go back and fix it. Casualty operations isn&rsquo;t one of them.&rdquo;

Marine Gunnery Sgt. James Sullivan, a member of a casualty notification team, has been the one knocking on the door several times. He knows the drill, but hates the exercise.

&ldquo;You wish nobody had to do it, but that&rsquo;s not the way it works,&rdquo; he said. &ldquo;The notification &mdash; there is no easy way.&rdquo;

Sometimes, a family&rsquo;s grief is aggravated by a well-meaning assistance soldier.

&ldquo;Sometimes CAOs want to help their family so much that they don&rsquo;t understand what can be done and what can&rsquo;t be done,&rdquo; said Lt. Col. Stacy Bathrick, spokeswoman for the Casualty and Mortuary Affairs Branch. &ldquo;They sometimes commit the Army to something that legally cannot be granted.&rdquo;

During the first few days after notification, the bereaved can feel overwhelmed as an assistance officer guides them through burial options, benefits and other paperwork, according to Ami Neiberger-Miller, a spokeswoman with the Tragedy Assistance Program for Survivors, a group that helps families who have lost a servicemember. To date TAPS has assisted more than 30,000 surviving family members, casualty officers and caregivers, according to its website.

&ldquo;Sometimes families do take it out on people,&rdquo; said Neiberger-Miller, who lost a brother in Iraq in 2007. &ldquo;They&rsquo;re angry. The process expects families to make a lot of decisions quickly.&rdquo;

Marine Lance Cpl. Christopher S. Adlesperger, 20, was killed in combat in Fallujah, Iraq, in 2004, just weeks after receiving the Navy Cross, an award second only to the Medal of Honor.

His mother, Annette Griego, told Stars and Stripes in December that her experience was very good and that her assistance officer took care of everything she needed. Still, she took issue with the abruptness of the process.

Marine officials were quick to present her with paperwork to sign for an initial $100,000 in death benefits a day after she was told that her son had been killed.

&ldquo;I don&rsquo;t think it was the best time to bring that up,&rdquo; she said.

Griego also said she wishes the Marines hadn&rsquo;t washed all her son&rsquo;s clothing before they returned them to her.

&ldquo;We wanted to smell something of him,&rdquo; she said.

Not every visit turns out badly.

For Patti and Scott Holmes, the loss of their son, Marine Lance Cpl. Jeffery S. Holmes, in Iraq in 2004 was mercifully eased by Marines who were professional and answered their questions. Those Marines, who never knew their son, drove from Massachusetts to their home in Vermont to break the news. A call from one of their son&rsquo;s comrades also helped clarify the tragedy: Holmes had been killed by enemy fire while conducting clearing operations in Fallujah.

&ldquo;I just hope that every other family was treated as well as we were,&rdquo; Patti Holmes said.

Overall, the branches have made &ldquo;tremendous strides&rdquo; in casualty notification since 2001, according to Kathy Moakler, of the National Military Family Association.

Even at its best, the process will never be good enough.

&ldquo;It comes down to, is there a good way to tell anybody that their loved one died?&rdquo; Neiberger-Miller asked. &ldquo;Probably not. Language fails.&rdquo;

Stars and Stripes reporters Nancy Montgomery and Kevin Dougherty contributed to this report.