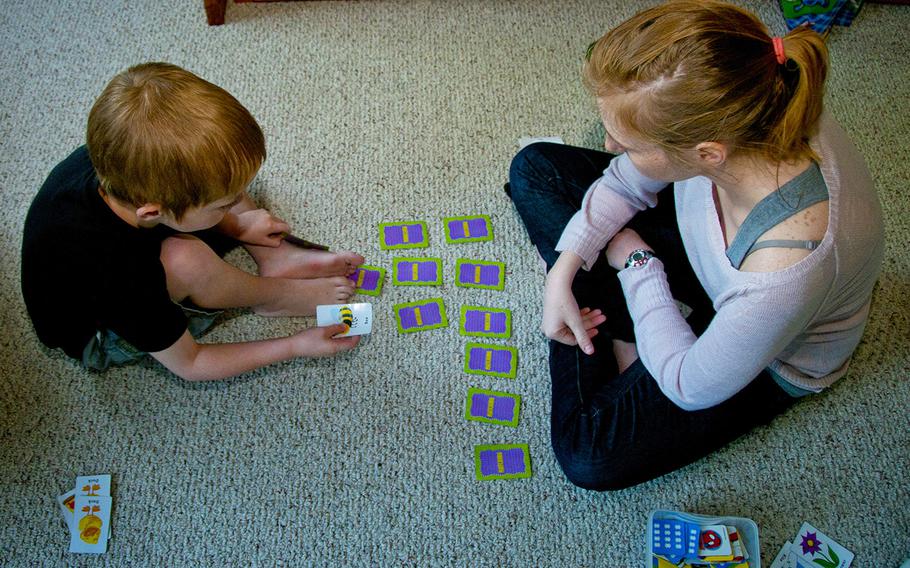 Jessika Ashcraft, wife of an Army helicopter pilot at Joint Base Lewis-McChord, Wash., praises the progress their 4-year-old son, afflicted with mild autism, has made this past year because of applied behavior analysis (ABA) therapy at home three-and-a-half hours a day, five days a week.

She called their ABA technician “amazing” and described techniques that improved markedly her son’s ability to express wants and needs, to engage in imaginative play and even to tolerate his first barbershop haircut.

The importance of such therapy to this family is evident. Under an expansive demonstration program, Tricare, the military’s health insurance program, now covers ABA therapy for more than 10,500 service families and retirees with autistic children. Another 16,000 are eligible for such care.

Yet this is a nervous time for these families, and for ABA therapy providers. On April 1, Tricare will cut ABA reimbursement rates as much as 15 percent, with a second rate cut planned in some locales next year. Some families are alarmed, some ABA businesses are enraged and some advocates for special-needs children forecast an access-to-care crisis.

Tricare officials see no such crisis in the offing, and hold firm to the rate cut plan. They do so despite receiving two complaint letters this month from members of Congress — one signed by four senators and another by 40 House members — urging postponement of the rate drop until the autism care demonstration ends in December 2018 and results are assessed.

The letters echo arguments of family advocates and the growing ABA therapy industry that a pair of studies ordered by the Defense Health Agency, on which rate changes were to be based, failed to capture accurately how Tricare reimbursements stack up against commercial insurance rates.

Douglas McBroom, manager of the autism program for the Tricare Policy and Benefits Office, in Aurora, Colo., said the criticism is off the mark. Tricare now recognizes the difficulty of tracking proprietary rate data of commercial insurers. So the new ABA rates have another goal to align reimbursements to what Medicare might pay, because by law Medicare is the yardstick Tricare is required to use in setting rates for health services.

Tricare notes that new ABA rates still compare favorably to its reimbursements for other mental health services. For example, doctorate-level clinical psychologists under Tricare are reimbursed at $93 to $105 an hour.

The therapy company the Ashcraft family uses has assured Tricare clients that services will continue despite the rate cut. But that same agency, South Sound Behavior Therapy of Olympia, Wash., will not be accepting new Tricare patients, explained its director, Jennifer K. Orme.

“The 15 percent reduction in rates is crippling for an agency,” Orme said. Eighty-eight percent of her patients are Tricare beneficiaries. “We have already reduced overhead staff, and will reduce the pay of our employees.” Given these cuts, Orme added, “we are not sure how many employees will chose to continue to stay [and] provide ABA services.”

McBroom said it’s too early to say if many more ABA providers will cap the number of new Tricare clients they accept. But he has seen no worrisome sign that ABA providers are dropping current Tricare patients.

Veronica Grant, spouse of an Army lawyer assigned to West Point, did get a letter from her ABA provider in December, less than a week after Tricare announced plans to cut rates, explaining that therapy for their 12-year-old son, Colum, would be ending by early January, and it did.

The letter from Hybrid Learning Group of Somerset, N.J., referred curiously to a “continued reduction in reimbursement rates” by Tricare, though the first cut was months away. The cuts make it “cost prohibitive for HLG to appropriately staff programs,” the company advised military clients.

Grant hasn’t found replacement therapy for her son, who is nonverbal and suffers other medical conditions. Her search for a new provider, she said, might have been made more difficult because the Grants reside in Bergen County, N.J., far from a military base.

Colum’s therapy, before it stopped, focused on use of a speech device to help develop functional communication skills, so he would be able to explain when he had a headache or stomachache and needed medicine.

“We saw a drastic reduction in the self-interest behavior, the aggression,” said Grant. “He was making progress toward some goals. … Then comes January, when the therapist left, and you could start seeing … at school behaviors went right back up again.”

Lawmakers opposed to the rate cuts noted in their letters that Tricare, to ensure care quality, also is imposing new certification requirements on therapy technicians. So as they gain new skills, and perhaps expect a pay raise, Tricare reimbursements are falling.

McBroom encouraged me to share his contact information with the Ashcrafts, the Grants or any family struggling to access ABA care. He still predicts that the lowered rates will not cause any significant access issues.

“We don’t have one child today that I can’t place [with an ABA provider] unless the mother wants a specific provider or a specific hour of the day, [because] some providers don’t work after-school hours,” McBroom said. “But other than that, I can tell you I have honestly placed 100 percent of the children that have called me since I’ve been here.”

Karen Driscoll, mother of a child with autism who now works for a coalition of ABA providers, charged that Tricare officials “are aware of the access issues and are proceeding anyway” with rate cuts.

“When you have a disabled child requiring therapy services, any interruption or delay in care will affect that child’s outcome,” she said. “We’re talking about military children so that also affects readiness,” if deployed parents get word that sons or daughter are cut off from services.