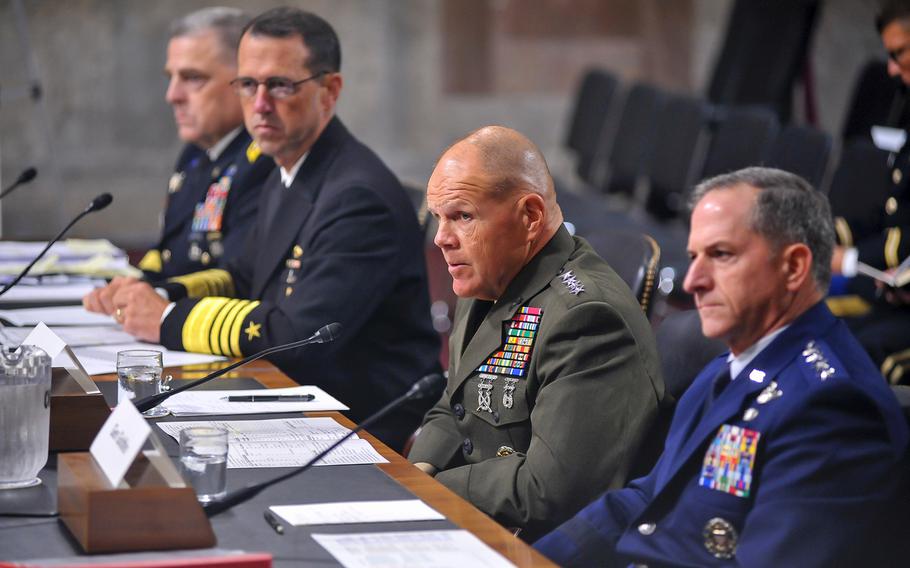 Buy Photo
Marine Corps Commandant Gen. Robert Neller testifies on Capitol Hill in Washington, D.C., on Sept. 15, 2016. At left is Army Chief of Staff Gen. Mark Milley and Chief of Naval Operations Adm. John Richardson. At right is Air Force Chief of Staff Gen. David Goldfein. Following violence in Charlottesville, Va., on Saturday, Aug. 12, 2017, the four service chiefs have affirmed that there is no place in the military for hatred and intolerance. (Carlos Bongioanni/Stars and Stripes)

WASHINGTON — Hate and extremism will not be tolerated within the ranks of the U.S. armed forces, top military leaders said after deadly clashes last weekend at a white nationalist rally in Virginia.

By Wednesday, the top generals from the Army, Marine Corps, Air Force and National Guard and the Navy’s top admiral had individually condemned intolerance following racist violence in Charlottesville, Virginia on Saturday. Members of the so-called “alt-right” — including white supremacists, neo-Nazis and KKK members — had gathered to protest the removal of a statue of Confederate Gen. Robert E. Lee. Anti-fascist protesters gathered to oppose them.

Adm. John Richardson, the chief Naval officer, was the first to issue an unequivocal statement as events unfolded Saturday.

He called the events “shameful … and unacceptable,” and added that they “must not be tolerated.” The admiral felt compelled to respond as he monitored the events Saturday, a Navy official close to the admiral said. Richardson has a strong connection to Charlottesville, where his daughter attended the University of Virginia.

“The Navy will forever stand against intolerance and hatred,” Richardson said in his statement. “For those on our team, we want our Navy to be the safest possible place — a team as strong and tough as we can be, saving violence only for our enemies.”

The generals’ responses came after President Donald Trump’s assertion during a press conference Tuesday that “both sides” were to blame for the clashes. Pentagon officials said the chiefs’ statements were not responses to the president.

“No place for racial hatred or extremism in [the] USMC,” a tweet on his official account read. “Our core values of honor, courage, and commitment frame the way Marines live and act.”

Gen. Mark Milley, the Army chief of staff, on Wednesday issued a similar message on his official Twitter account.

“The Army doesn’t tolerate racism, extremism, or hatred in our ranks,” he wrote. “It’s against our values and everything we’ve stood for since 1775.”

Lengyl added: “Our diversity is our strength.”

Defense officials, who spoke on condition of anonymity, said they were unaware of any active-duty servicemembers who were under investigation for participating in the demonstrations. However, the Navy was looking into allegations that a reservist may have been involved, a Navy official said.

Several individuals involved were military veterans. The man accused of killing a counter-protestor and injuring 19 others when he plowed his car into a group as they peacefully demonstrated washed out of Army basic training after four months, according to the Army. James Alex Fields Jr., 20, of Ohio was charged with murder after his arrest Saturday.

The leader of one of the groups that participated in the rally is said to be a Marine veteran who served in Iraq and Afghanistan and later worked as a recruiter.

Dillon Ulysses Hopper describes himself as the “CEO” of the Vanguard America neo-Nazi hate group, according to a Task & Purpose report. Fields was pictured marching alongside Vanguard America demonstrators wearing clothing associated with the group.

Others in the crowd wore military-like apparel and tactical gear. At least one white nationalist was photographed wearing an 82nd Airborne Division baseball cap.

Asked about military-style dress among the alt-right protestors, Defense Secretary Jim Mattis said Monday that people are allowed to dress as they please in the United States.

Mattis added he was upset watching the weekend events in Charlottesville.

“I was saddened by it, very saddened about what I saw,” he told reporters at the Pentagon.