Meet the Marines on the ground in Afghanistan 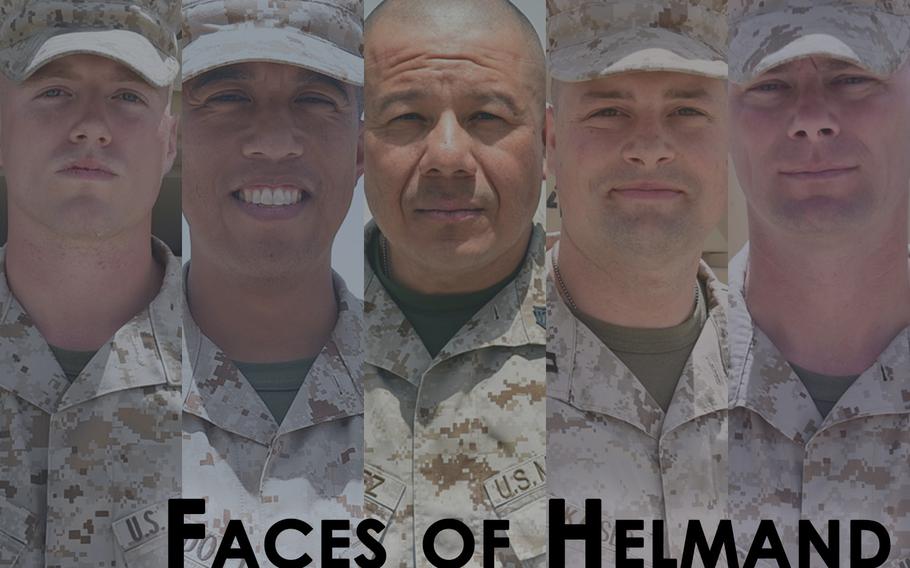 CAMP SHORAB, Afghanistan — A Marine unit was dispatched to Helmand last month for the first time since 2014. The 300-strong Task Force Southwest is taking over from an Army unit that has been there since the fall. This new team, like its predecessor, is not a combat unit; its purpose is to advise and to provide much-needed instruction and support to the Afghan military. About half of the new Marines have previous experience serving in Afghanistan or on advising teams. For the veterans, the new mission stands in stark contrast to their previous Afghanistan tours. Instead of being holed up at cramped patrol bases, they are stationed at the well-appointed Camp Shorab, which sits on land once occupied by the U.K.’s Camp Bastion. Instead of going on patrol and taking fire, they spend their days working alongside their Afghan counterparts, behind the wire. The returning Marines have nine months to make a mark. Since the last Devil Dog pulled out in the fall of 2014, the Taliban have reconquered about half the province, which the Marines liberated at great cost between 2008 and 2012. Marines with Task Force Southwest will pick up where the Army’s Task Force Forge left off. They will help the Afghan Army’s 215 Corps and the 505th national police zone hold off the Taliban and maybe even start to push them back. In a transfer of authority ceremony at the end of April, Stars and Stripes spoke with some of the Marines in Helmand. Here are a few we met.

How this deployment compares to his previous one: This is way better than when we were in Marjah. Last time, I was eating “tray rats” (unit-sized MREs), we were on combat patrols every day, taking contact, IEDs. Now we have a great chow hall, the gym, and we’re training. We’re not knee-deep in mud and opium fields. It’s a lot different.

The difference in Camp Leatherneck today: It’s completely different. In 2011 when I was here, I would compare it to being on a Marine Corps base in the States. There were people everywhere. The gyms, chow halls were phenomenal. It was really built up. It’s all still there, but it’s a ghost town. Pretty much everything is exactly the same except it’s a little more weathered, and there are no people there.

Job on Task Force Southwest: Adviser to the 215 Corps G-6 (Communications/Signals). We’re making sure they understand (how) to enable command and control in the most effective manner for their forces at the brigades and down to the kandak (battalion) level. It’s a dual mission of advising them on the best way to do C2 when they’re engaged and doing missions. So, tactical communications, larger broadband communications, as well as the garrison communications — fiber in their buildings and building up that infrastructure.

How the Afghans are doing: I think the Afghans are doing a whole lot better than people give them credit for. You hear a lot of the bad news, reports that paint a really bad picture. But overall, there are a lot of positive things that are going on. They’re making a lot of positive gains. They’re trying hard. Their G-6 is way more advanced than I expected. They are probably operating close to what a Western military would be. Their communications out here are great. There’s still work to be done on maintenance. There’s still lots of little things to work on. But overall, they get the big picture, and they’re executing on that.

Advice received from Afghanistan veterans: Make sure you know your (Afghan) counterpart and get close to them. The better you know your counterpart, the better off you’re going to be, because they know what’s going on. Prepare for it as much as you can. Train. Stay on guard. Watch yourself, and watch everyone around you. Stay vigilant.

Job on Task Force Southwest: I’m pulling guard duty, (looking out for) anything that seems like a threat, that’s trying to attack the base. My platoon, all we’re worried about is making sure there are no threats coming into the base.

Why he enlisted: I felt like God led me here. One day I was at church. It was Veterans Day. They were recognizing all the people who were veterans. I felt led to come.

Memories of 9/11: I was in elementary school, so I don’t really remember much.

Were the wars discussed much while he was growing up? Not really. We were farmers.

Advice from Afghanistan veterans: Just that anybody can do anything at any time, so just be on your guard at all times.

Lucky charm: Before I left, this little kid (in church) came up and gave me a necklace, a shield with a Bible quote on the back of it. I didn’t know the kid. He just walked up and said he wanted to give me this. His dad had been deployed before and had the same necklace.

Why he joined the military: I didn’t know much about the military except that I had about $150,000 worth of (school) loans. (But) I’m well beyond my obligation. My first deployment really solidified the sense of purpose of being in the military. I would have thought (that) being sent away for a year in a country where it’s dangerous and away from my family, I would have said I was done. But it turned it around. I actually re-upped after my deployment.

Why? I felt like I made a difference. We had a local national clinic that we set up when I was there, and (it felt good) to be able to do something special for a place that has nowhere near the resources that we have, and yet we’re in the same fight.

How this deployment differs from his last one: I don’t know if it’s a lot different. It’s the same in the sense that it’s nice to get out and see that there are other fighters who are out there wanting to defend the freedom of their country, but also on a global scale to prevent terrorism across the world.

Where the Afghan medical teams need help: Communication. Getting them (from point of injury) to the next echelon of care efficiently is something that I’m wanting to focus on. It’s not a lot of clinical stuff. It’s really getting the right leaders talking to each other. So at the point of injury and then talking back to the Corps who can talk to the hospital to be able to receive them. Time is of the essence when it’s something that needs surgery.

Born in: Nicaragua. Came to the States at age 14.

Why he enlisted: I always saw (the Marines) as being the best fighting force in the world. From the moment that recruiter walked in (to my high school), I knew I wanted to be an infantryman in the United States Marine Corps.

Why he’s stayed so long: The motivation of being there for those junior Marines.

Lessons from previous deployments: Being overly patient will pay off, and it will prevent us from doing the wrong things that then will break our battle rhythm with (the Afghans). It’s going to be hard to build that trust. It’s going to be hard to come in around them. They’re not Americans. What I’ve learned is that you have to be patient, no matter what the circumstances, no matter what you go through.

On the mind-sets some younger Americans have grown up with: If in 9/11 you were only 10 years old, what do you hear? You hear in the media, you hear in your house, from your parents, at school, from your friends, (you hear) negative things about the Middle East, about Muslims.

What he tells young Marines: We don’t have 1.3 billion Muslims being terrorists. There are (only) certain ones, and those are the ones we need to eradicate. We need to (get) control over those regions that are planning or doing whatever type of terrorist acts against our country and the world period. (I tell them:) you can’t judge everyone. Not all Muslims are terrorists. You have to be professional. No matter what you think, keep it to yourself. Be professional.

What he brings on deployment: Pictures. (It reminds me) you come from somewhere. You’re not by yourself. You have your Marine Corps family. But then you have your DNA family. You are here with your Marine Corps family. But you have to take care of your family. Make sure you’re calling them. Send them a letter. They’re doing a lot for us. We need to do something for them. boyd.eb@stripes.com Twitter: @ebboyd