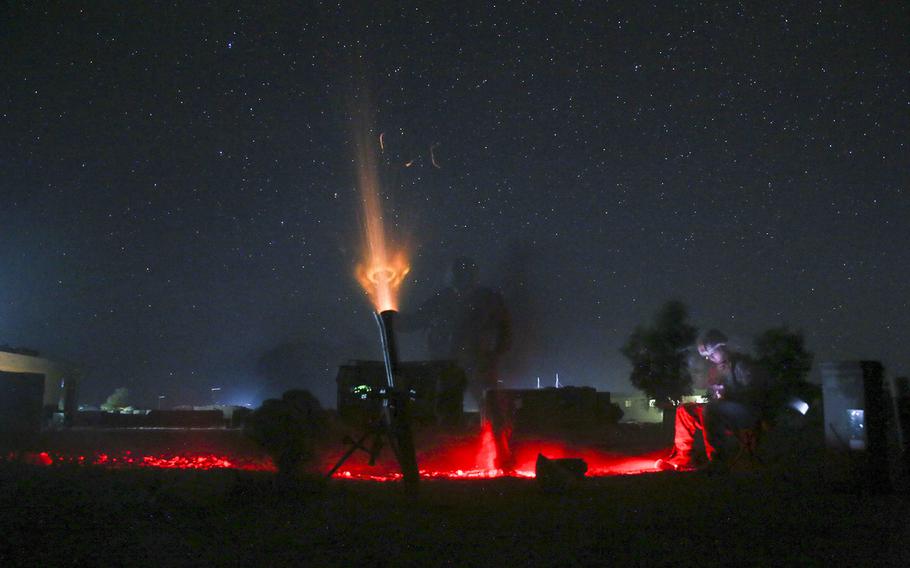 U.S. Marines with Task Force Southwest fire a non-explosive illumination round from an 81mm mortar at Camp Shorserack, Afghanistan, July 15, 2017. Defense Secretary Jim Mattis said Thursday, Aug. 17, 2017, that he expects President Donald Trump to soon reach a decision on the new strategy for the region and the military’s role in Afghanistan. (Lucas Hopkins/U.S. Marine Corps)

WASHINGTON — National Security Council leaders will present President Donald Trump with detailed options to adjust the nation’s policy for South Asia and the war in Afghanistan when they meet Friday at Camp David, according to U.S. officials.

Defense Secretary Jim Mattis said Thursday he expected the president to soon reach a long-awaited decision on the new strategy for the region and the military’s role in Afghanistan, where American forces have been fighting since 2001.

“We will move this toward a decision,” Mattis said of the meeting at the presidential retreat in Maryland. “We are coming very close to a decision, and I anticipate it in the very near future.”

Mattis, speaking alongside Secretary of State Rex Tillerson at the State Department, echoed comments he made at the Pentagon earlier in the week when he said all options for the war in Afghanistan remained under consideration.

On Monday, Mattis confirmed those options ranged from a full military withdrawal to a several-thousand troop increase.

The Trump administration’s strategy for Afghanistan and the South Asia region had been expected about a month ago. Mattis told lawmakers in June that the new strategy would be unveiled by mid-July. The defense secretary told reporters recently that he had expected to hit that deadline, but decisions “take time” and planning is “hard work.”

There are about 8,400 U.S. troops serving in Afghanistan. The vast majority are assigned to the NATO mission to train and advise Afghan security forces battling the resurgent Taliban. The United States also maintains a force within the country with the mission to directly combat terrorist groups including al-Qaeda and Islamic State.

If the Pentagon has its way, it will pour up to 5,000 more servicemembers into Afghanistan to bolster that two-fold mission and attempt to break a deadlock with the Taliban, U.S. defense officials said.

Pentagon leaders generally agree with the top U.S. commander in Afghanistan, Army Gen. John Nicholson, who says the training mission needs at least 3,000 more Americans to be successful, a defense official said Thursday. However, several White House officials close to Trump do not agree with that assessment, the official said on condition of anonymity to discuss private planning.

Trump in June granted Mattis the authority to send additional troops to Afghanistan. However, the defense secretary has delayed new troop deployments until Trump signs off on a full strategy.

The war in Afghanistan remains dangerous for American troops. This year, 10 U.S. servicemembers have been killed in action in the country. The most recent death came Wednesday, when a soldier from the Utah National Guard was killed in an explosion during an operation targeting ISIS fighters in eastern Afghanistan. The soldier's family has identified him as Aaron Butler, 27, of Monticello, Utah, according to the Associated Press.