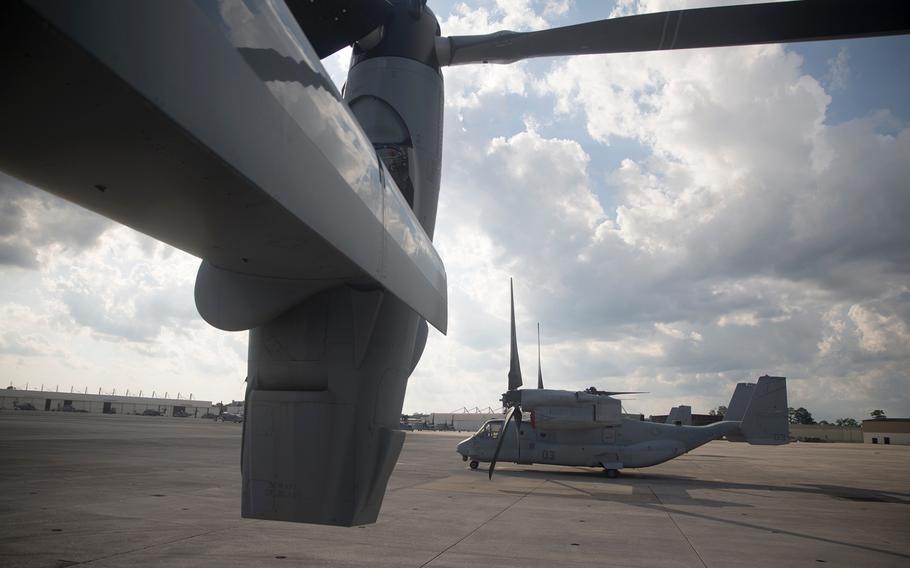 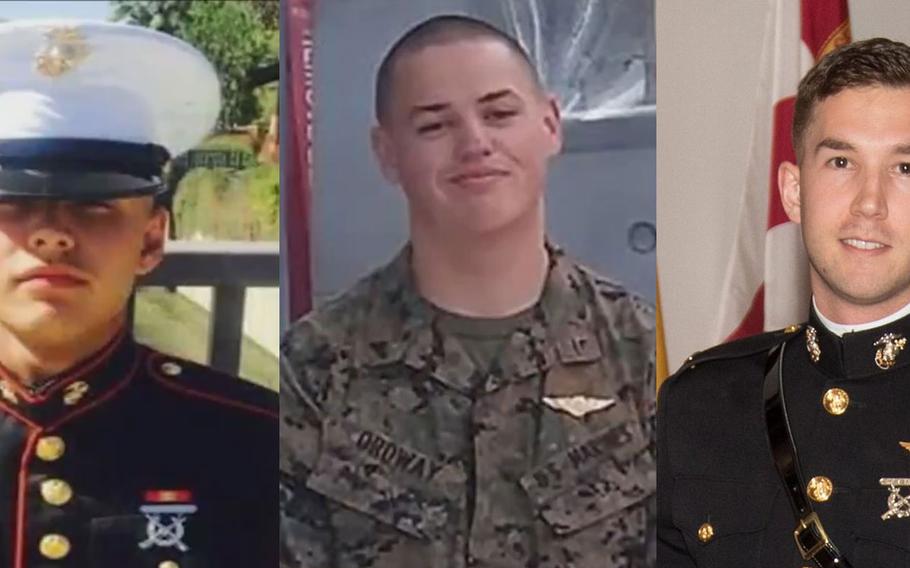 Pfc. Ruben Velasco, from left, Cpl. Nathaniel Ordway and 1st Lt. Benjamin Cross were identified as the Marines killed in an Osprey crash in Australia over the weekend. (U.S. Marine Corps photos)

WASHINGTON — A pilot, a crew chief and an artilleryman were killed Saturday when their MV-22 Osprey crashed off the coast of Australia during a training exercise, the Marine Corps announced late Monday.

The three Marines – 1st Lt. Benjamin Robert Cross, Cpl. Nathan Ordway and Pfc. Ruben Velasco – were officially declared dead following extensive search and rescue efforts after the tilt-rotor aircraft crashed into the water about 18 miles off the coast of the Shoalwater Bay Training Area in Queensland, according to a Marine statement.

“The loss of every Marine is felt across our entire Marine Corps family. To the families of the brave Marines we lost – there is no way for us to understand what you are going through,” said Col. Tye R. Wallace, Commanding Officer, 31st Marine Expeditionary Unit. “What we do know is that your Marines left a lasting impression on the 31st MEU, the Marine Corps, and the world. They will live on forever in our thoughts and our hearts. You will always be a part of the Marine Corps family, and you will remain in our prayers.”

Family members had earlier identified Cross, Ordway and Velasco as the missing Marines in social media posts and news interviews.

Cross, 26, was a native of Maine who commissioned as a Marine aviator in 2013 after graduating from Virginia Military Institute, his older brother Ryan Cross told the Portland Press Herald in Maine. He had been stationed in Okinawa, Japan, for about a year and had been in Australia for the past three months participating in the joint Australia-U.S. military training exercise Talisman Saber. He was assigned to Marine Medium Tiltrotor Squadron 265, according to the Marine Corps.

Ryan Cross described his brother as “smart” and “just a great guy.”

“My brother, all through high school, knew he wanted to be a pilot in the military. It had been his dream,” Ryan Cross told CBS News Radio on Sunday. “It probably sounds cliché, but you know, words really can’t describe my little brother. He was … the type of person everybody wishes they knew.”

Ordway, 21, of Sedgwick, Kansas, was a crew chief assigned to Marine Medium Tiltrotor Squadron 265, according to the Marine Corps. His sister, Taylor Ordway, had identified him previously in a brief comment requesting prayers on the 31st Marine Expeditionary Unit’s public Facebook page.

Velasco was an artilleryman from Los Angeles assigned to Battery G, Battalion Landing Team, 3rd Battalion, 5th Marines, according to the Marines. He had just turned 19 on Aug. 1, according to his public Twitter profile.

Velasco’s mother, Gemily Calzada, confirmed her son was among the missing in Facebook posts on Sunday.

Her husband, Ray Calzada, wrote late Saturday in a separate Facebook post that they were informed by the Marines that Velasco was among the missing.

“My heart is broken for our family’s loss,” Ray Calzada wrote of his stepson. “Ruben is loved so very deeply and he will be missed by everyone who had the honor of knowing him.”

Velaso was a 2016 graduate of West Covina High School in West Covina, Calif., where he played football, the school said.

On Tuesday, dive operations from the Australian Navy’s HMAS Melville hydrographic survey ship, which found the MV-22 wreckage Sunday, were continuing, according to the Pentagon. Those operations could last several months.

“The Australian forces volunteered their help before we could even ask, demonstrating the deep ties and enduring nature of the alliance between our two countries,” Navy Capt. Jeff Davis, a Pentagon spokesman, said Monday.

It was still unclear what led to the crash, which was under investigation, Davis said. The aircraft had taken off earlier Saturday from the USS Bonhomme Richard, an amphibious assault ship. The Osprey was approaching the USS Green Bay, an amphibious transport dock ship, about 4 p.m. local time when it hit the water with 26 Marines aboard, the Marines said.

The Brisbane, Australia-based Courier-Mail newspaper reported the Osprey had smashed into the ship’s deck and slid into the ocean. Pentagon officials declined to verify that report Monday.

Twenty-three of the Marines on the Osprey were recovered Saturday.

The Marine Corps on Monday was considering a request from the Japanese government to ground its fleet of MV-22s based in that country, according to two U.S. defense officials who spoke on condition of anonymity.

“I have requested that they refrain from all flight operations by MV-22 Ospreys in Japan,” newly appointed Defense Minister Itsunori Onodera told reporters Sunday.

Onodera – who took over last week for the embattled Tomomi Inada who resigned after a data cover-up scandal – also called on the Marines to provide information on the crash, to investigate its cause and to take preventative measures, a ministry spokeswoman said Monday.

Davis, who declined to confirm the Marines were considering the stand down, said U.S. Forces-Japan officials were in discussions about the incident with the Japanese government.

“We always take the safety of all our operations, not just MV-22s, seriously,” Davis told reporters at the Pentagon. “These are forces, these are capabilities, these are assets that are there specifically for the defense of Japan and for furthering our shared security and the need for stability in the region.”

For now, Japan-based Ospreys are continuing to operate, he said.

The aircraft, which lands and takes off like a helicopter but flies like an airplane, has a checkered past. Four high-profile crashes during its development phase from 1991 to 2000 killed 30 people. Since it became operational in 2007, Ospreys have crashed five times, killing nine servicemembers.

Most recently, an Osprey crashed in January during a special operations raid on al-Qaida in the Arabian Peninsula in Yemen, leaving two servicemembers injured.

But some in the Pentagon have long defended the versatile aircraft’s use. Cross’ father, Robert Cross, told CBS news Monday that his son believed the aircraft had an undeserved reputation.

“He thought it got a lot of bad publicity because he really enjoyed flying it, and it was something he always wanted to do,” Robert Cross said.

Saturday’s crash could complicate the joint Northern Viper exercise, set to kick off between Marines and the Japan Ground Self-Defense Force on Thursday in Hokkaido. Six Ospreys are scheduled to participate, a defense ministry spokeswoman said.