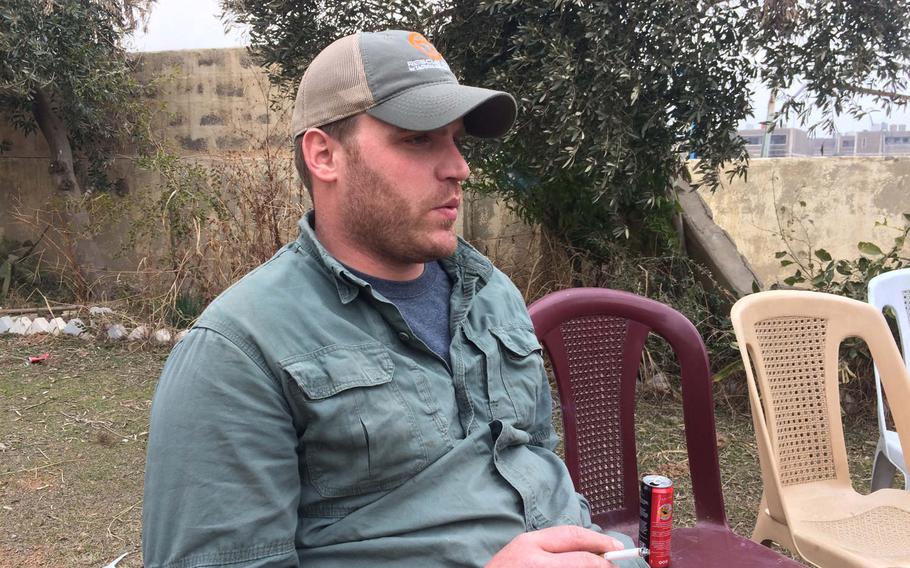 MOSUL, Iraq — A “marathon mass casualty” is how American volunteer Pete Reed sums up his work providing medical care to Iraqi soldiers and civilians in this city.

Reed, 27 of Bordentown, N.J., did two Afghan tours as a noncommissioned officer in the Marine Corps from 2007 to 2011 before a four-year stint as an emergency medical technician. He’s been in Iraq since 2015.

On Saturday Reed smoked a cigarette amid mortar blast craters behind a field clinic in Mosul’s battle-scarred Al Karama neighborhood. His clothes were flecked with the blood of a child he had tried, in vain, to save.

The burly former ski instructor estimates he and his small team of foreign volunteers have treated 1,500 wounded since the battle to free Mosul began in October.

Each day the volunteers treat 50 to 60 patients. The patients’ injuries range from bullet and shrapnel wounds to amputations and “the worst things imaginable,” Reed said.

“I’ve dealt with a lot of messed-up kids and put a lot of people in body bags — young, old, women, Sunni, Shia,” he said.

Marine Corps training prepared him to fight, deal with a few injured people and treat his buddies and himself, he said.

“I don’t think there is any training in the world that can train you to treat three-month’s worth of mass casualties. It’s a marathon mass casualty. It is just this endless cycle of pain and violence and death,” he said.

Reed came to Iraq with the goal of fighting the Islamic State but ended up training Kurdish peshmerga fighters and working as a medic with Iraqi special operations forces.

“My family thought I was nuts at first. They didn’t understand. They have always been positive, but they just weren’t sure what I was doing over here,” he said.

Half of the patients Reed treats are soldiers and half are civilians. The things he’s seen have left a mark.

His most recent memory is of four boys, ages 10 to 13, who were playing soccer last week when one kicked an improvised explosive device. The boy with the most serious injuries had an amputated leg and burns all over his body.

“There were fist-sized holes in his abdomen and huge fragmentation in his thorax and entry wounds from shrapnel behind his ear. There was less bleeding than you would imagine because the heat cauterized the wounds,” he said.

The medics stabilized the boy as best they could, and he made it to another aid station before dying. His friend, whose intestines hung out of a hole in his stomach after the blast, survived, he said.

“The only way you could see this in an emergency room in the States would be if a propane tank factory exploded,” Reed said. “I’m resilient, but there is no way anyone could make it through this without some emotional impact.”

The nightmare is far from over. The volunteer medics are planning for more work when Iraqi forces cross the Tigris River to liberate the western part of Mosul.

Maj. Ahmed Hussein, an Iraqi special forces officer who oversees the aid station where the volunteers work, said as many as 100 civilians have been treated there daily during the offensive.

“We receive a lot of women and children with injuries because they’re targeted when they try to escape. They shoot them in the back as they run, especially the women,” Hussein said.

Islamic State’s latest tactic is to drop grenades from drones on fleeing civilians, he said.

The Iraqi medics will treat anyone, even injured enemy fighters, but they don’t trust the locals, he said.

“I’m coming here to help these people, but when I was here in 2014, I couldn’t leave my base in uniform because there were many people working with al-Qaida. Now I don’t trust anyone,” he said.