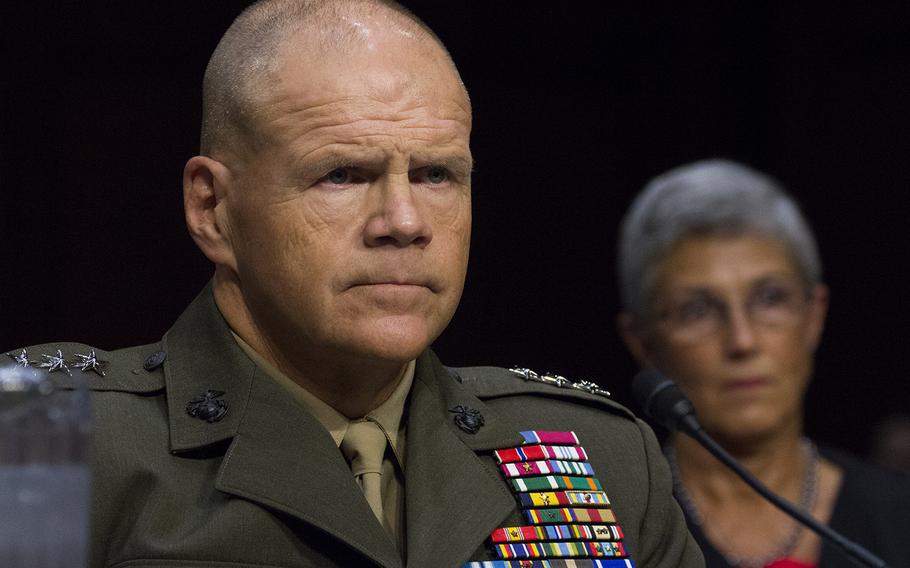 Buy Photo
Lt. Gen. Robert Neller listens to the opening statements during a Senate Armed Services Committee hearing on his nomination to be general and Commandant of the Marine Corps, July 23, 2015 on Capitol Hill. Behind him is his wife, D'Arcy. ( Joe Gromelski/Stars and Stripes)

WASHINGTON — The nominee to be the next Marine Corps commandant had a rocky confirmation hearing in the Senate on Thursday, drawing fire for his positions on the war in Iraq and arming military recruiters.

Lt. Gen. Bob Neller, who was nominated earlier this month to replace Gen. Joseph Dunford, told the Armed Services Committee that the war in Iraq against the Islamic State has been at a stalemate for at least a year.

When pressed by committee chairman Sen. John McCain, Neller backed the current Obama administration strategy, which relies on keeping U.S. troops off the ground, directing air strikes. McCain, R-Arizona, has argued that the policy is losing the year-old war in Iraq.

“The Iraqis cannot do it themselves. That is why they are losing,” he told Neller, citing the fall of Mosul to the Islamic State last year. “That is why they’ve lost their second largest city.”

Neller disagreed, telling the committee that the Iraqis are not losing.

McCain made his position clear: “I am very disappointed in a number of your answers.”

Neller led the I Marine Expeditionary Force in Iraq from 2005-07 and oversaw forces in Anbar province during the Sunni Awakening, which became a key turning point for the U.S. war effort and the country’s sectarian insurgency. The MEF trained 6,000-8,000 Iraqi police and returned territory to U.S.-trained Iraqi security forces during the earlier war.

He was the second military nominee this week to say firearms at the nation’s recruiting centers should be considered. On Tuesday, Army Chief of Staff nominee Gen. Mark Milley testified that it could be appropriate under certain circumstances.

But he also cautioned against the move and possible unintended consequences.

“I think we need to take a look at it, but I have some concerns of second- and third-order effects of that,” Neller told senators. “I’m not going to discount it but I think in the end, it is the most extreme measure to do what we need to do, which is protect those Marines who are serving out there.”

Defense Secretary Ash Carter has ordered a complete security review in the wake of the shooting, which has highlighted the threat of homegrown attacks and the vulnerability of military offices where personnel are barred from carrying weapons.

Mohammad Youssef Abdulazeez, a 24-year-old Kuwait-born resident of Tennessee, killed four Marines and a sailor last week when he attacked a recruiting center and a Navy and Marine Corp facility in Chattanooga.

Neller said other measures to boost security are underway and others fixes could be made, such as reinforcing glass in the front of the centers. Arming recruiters, he said, could alienate them from the public.

“We need to stay connected to the American people and we need to make sure they [recruiters] can go to schools and find the young men and women who want to become Marines,” Neller said.

Congressional leaders have pushed to allow more firearms on military bases and have proposed legislation to do it. Governors in some states have moved to arm some recruiters and move troops to armories.

Graham, who sits on the Armed Services Committee, criticized Neller on his position and said arming the strip mall recruiting center hit by a hail of bullets could have made a difference. Nobody was killed at the recruiting center but the shooter escaped and killed the servicemembers at a Navy Reserve center.

“It is time to get real as to where we stand as a nation,” said Graham, who is running for the Republican presidental nomination.