Marine commandant: Corps must be modified for modern warfare 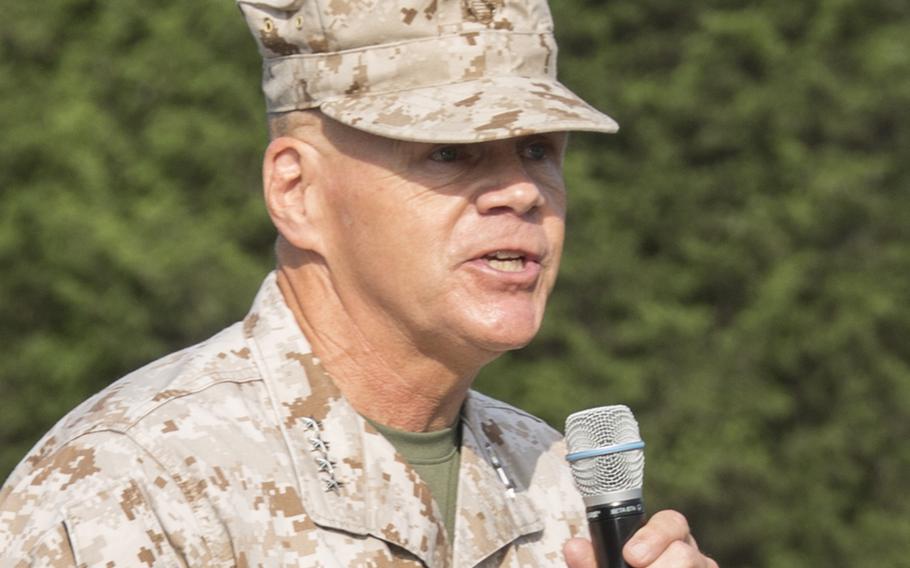 WASHINGTON – The U.S. Marine Corps will adjust its force structure in the near future as it identifies gaps in capability and technology that it could face in a battle with a modern enemy, Marine Corps Commandant Gen. Robert Neller said Tuesday.

The Corps in recent years has made adjustments to the way it trains and equips Marines to prepare them to fight a near-peer adversary, Neller said at the Center for Strategic and International Studies, a bipartisan Washington think tank. Additional adjustments, including to the way front-line units are structured, will be necessary for the Marine Corps to be prepared to face a rival with similar capabilities, such as Russia or China.

“We are going to reshape this Marine Corps,” he said. “We aren’t going to stay exactly the same, because I don’t think we can. The threats and the capabilities out there are changing too fast and we have to be able to survive on the modern battlefield.”

The Marine Corps must expand its capabilities in cyber and electronic warfare, he said, but it also must increase its abilities to counter threats it has not faced on the battlefield since World War II, such as defending against aerial bombardment or advanced artillery systems.

The Corps has incorporated enemy unmanned aerial systems into training at Twentynine Palms, Calif., where it has equipped the opposing force with small drones to gather intelligence on the unit undergoing training.

Other changes Marines could soon see, he said, have not been decided.

Neller used the Marine Corps’ 24 infantry battalions as an example of an organization that will undergo some changes.

There are no plans to cut any of those units, he said, but the Corps is studying how they are organized to determine which capabilities need to be expanded or added and which others should be cut or eliminated.

“What’s inside those individual infantry battalions is going to be a little bit different,” Neller said. “Not fundamentally different, but I’m not ready yet to say what exactly that is going to look like.”

For example, he said, the Marines might add an assistant squad leader to infantry squads who would be in charge of flying and managing the unit’s small reconnaissance drones.

They are also considering how to incorporate cyber warriors into a maneuver battalion and whether they can afford to scale back an aspect like counter-improvised explosive device capabilities to make room for the changes.

“How do you make this all fit? We’re in the process of determining all that,” he said.

The adjustments are being made under the assumption that the Corps’ will not grow. The service will reach its post-9/11 drawdown bottom line of 182,000 Marines in the coming months, he said. At the heights of the wars in Iraq and Afghanistan, the Corps had 202,000 Marines.