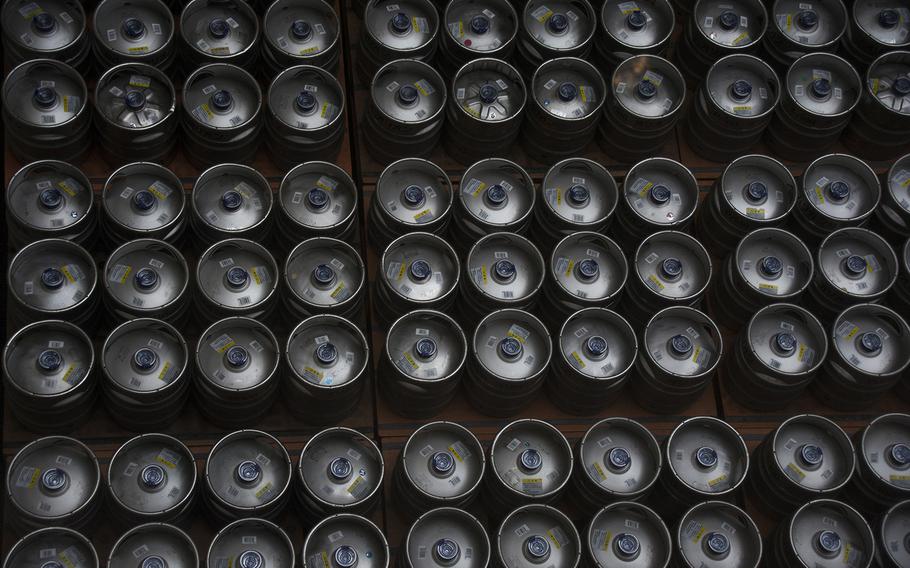 Kegs of Orion beer are prepared for delivery at Orion Happy Park in Nago, Okinawa, Aug. 14, 2019. (Carlos Vazquez/Stars and Stripes)

Kegs of Orion beer are prepared for delivery at Orion Happy Park in Nago, Okinawa, Aug. 14, 2019. (Carlos Vazquez/Stars and Stripes) 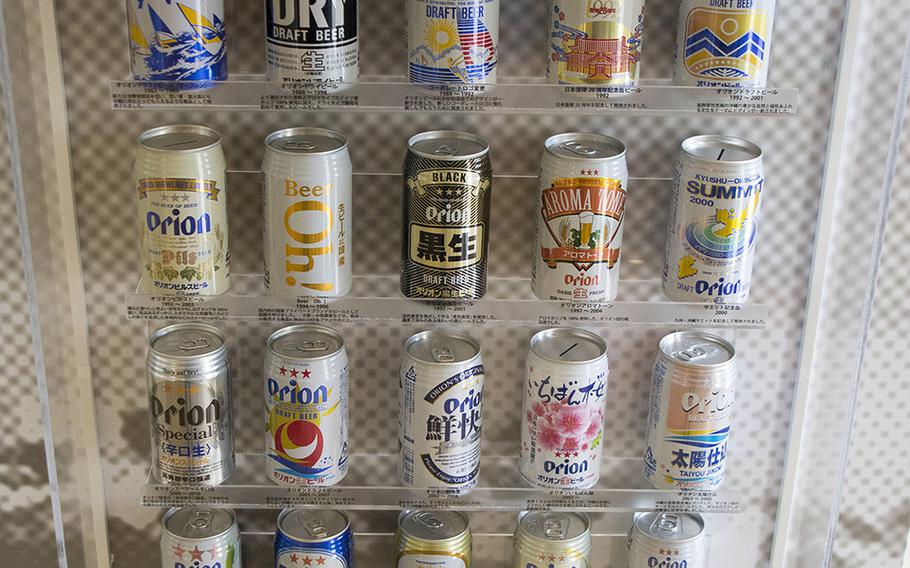 Orion beer cans are displayed during a tour of Orion Happy Park in Nago, Okinawa, Aug. 14, 2019. (Carlos Vazquez/Stars and Stripes) 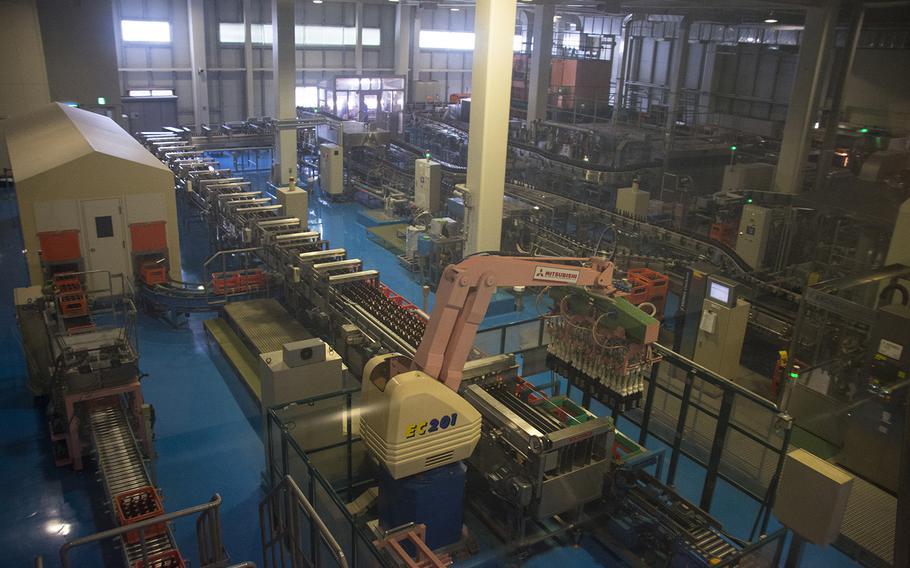 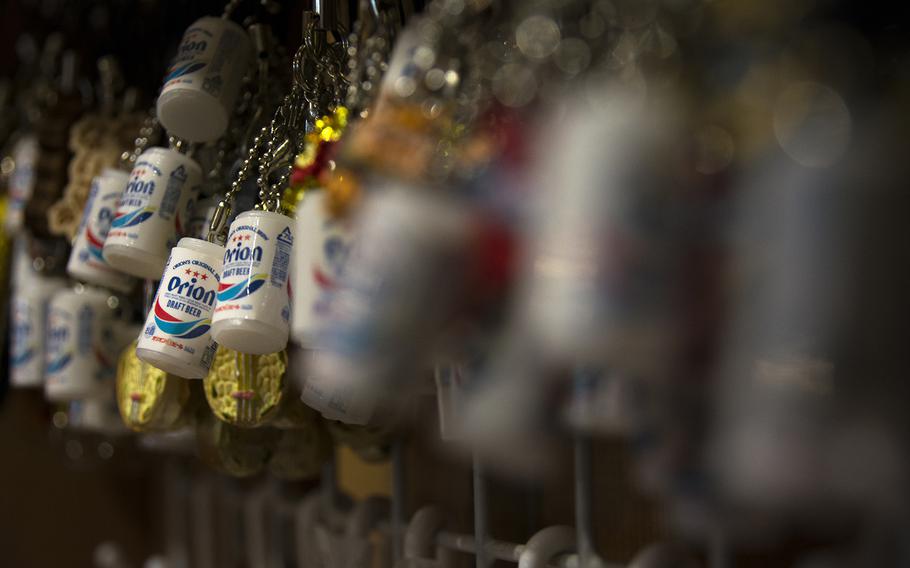 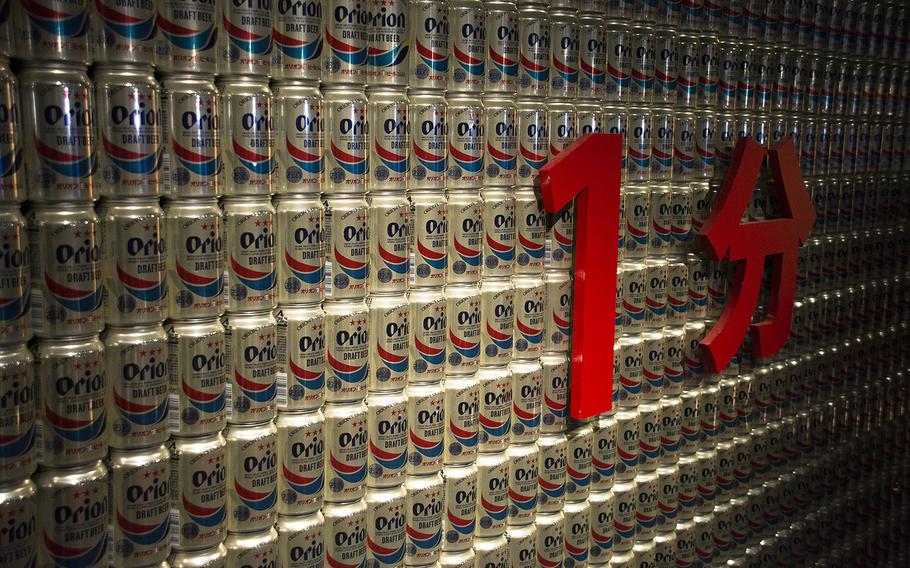 Cans of Orion beer are displayed during a tour of Orion Happy Park in Nago, Okinawa, Aug. 14, 2019. (Carlos Vazquez/Stars and Stripes) 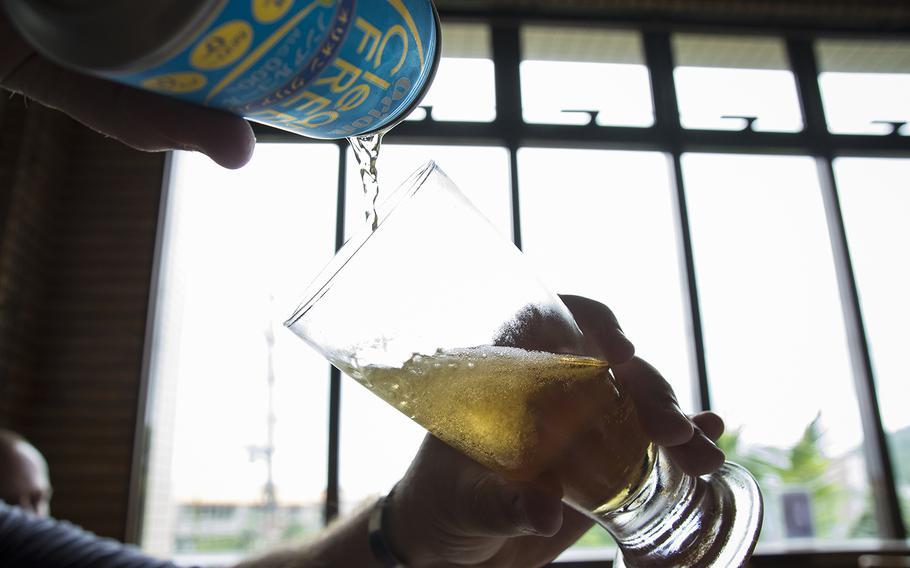 Non-alcoholic Orion Clear Free beer was among the beverages offered during a tasting at Orion Happy Park in Nago, Okinawa, Aug. 14, 2019. (Carlos Vazquez/Stars and Stripes)

If there is a recipe for happiness, it surely contains malt and hops — and there is plenty of that to go around at Orion Happy Park in Nago city.

The Happy Park gives free tours that allow guests to see how the pilsner is made. The result feels like the answer to the question; what would happen if Willy Wonka was replaced in his factory by Samuel Adams’ Jim Koch and surf legend Kelly Slater?

The experience leaves visitors feeling like Charlie Bucket, as if they’d sampled the Fizzy Lifting Drinks and were handed the factory keys.

The company, known today as Orion Breweries Ltd., was founded by Sosei Gushiken on May 18, 1957, according to the Orion website. The island was firmly in the hands of the U.S. military at the time and Gushiken sought to develop manufacturing that would contribute to the economic and social reconstruction of an island decimated by World War II.

Two years later, the company’s name was chosen by the public, the website said. After placing advertisements in local newspapers, it received 2,500 entries with 823 potential names.

Orion was chosen because the constellation is in the southern sky and Okinawa is a southern Japanese island. The stars symbolize dreams and aspirations, and the commander of U.S. forces governing Okinawa at the time was a three-star general.

The blue and red colors on the bottles and cans symbolize the sea and sky of Okinawa and the southern sun, the website said. They also stand for harmony with nature, freshness and purity, as well as burning passion, energy and solidarity.

Gushiken chose the factory location in Nago for the quality spring water from Mount Nago, according to factory staff. Orion Draft Beer was born in July 1960.

Early in its existence, Orion experienced growing pains, Okinawa’s Ryukyu Shimpo newspaper reported in 2017. American beer reigned supreme on the island, with Yamato Beer in second place. Orion was disparagingly referred to as “island swill” at the time and treated as second-rate.

He dispatched employees to the cabarets and restaurants of Naha’s Sakurazaka social district, selling Orion door to door, the Shimpo reported. “They developed their market by selling beer directly to stores during the day and observing the pub-crawling customers and the goods being offered during the evening.”

Gushiken’s gambit paid off. By 1964, Orion accounted for 83% of beer consumed in Okinawa, the Shimpo said. It has been growing its market share ever since.

In 2002, Orion partnered with Asahi Breweries to produce and distribute Super Dry in Okinawa in exchange for nationwide distribution, the Shimpo reported. Today, Orion can be found on the Japanese mainland as well as in countries all around the world.

The refreshing draft — with its unique flavor profile that is light, crisp, malty, with a hint of citrus and a slightly bitter finish — has endeared itself to U.S. servicemembers and connoisseurs alike for decades. It is often the first thing mentioned by nostalgic veterans recalling their Okinawa deployments. Posts on social media detail what stateside stores carry the distinct brown bottles.

Tours of the Orion brewery must be booked in advance. This can be done online. While the tours are in Japanese, English scripts are available for English speakers to follow along.

The tours are 30 minutes long, followed by 20 minutes of tasting — and don’t worry, designated drivers, non-alcoholic beer is available for you.

The tour starts in front of an old-style Okinawan sundries store, the site of Orion’s genesis. Then it is off to see the carefully selected ingredients that go into each Orion beer.

Orion’s main ingredients are malt — or germinated and dried barley — from Europe, Australia and Canada and hops from the Czech Republic and Germany, Orion literature said. Crushed malt is placed in a mash tun and heated, producing sweet wort.

This is filtered and transferred to a kettle. Hops are added into the mixture, which is then boiled.

Yeast is added to the mixture and it takes about a week to turn into fresh beer. The beer is then transferred to maturation tanks, where it will sit for another 10-15 days.

After being filtered, the beer is ready for bottling and canning, the brewery literature said. Orion fills 19,200 bottles, 72,000 cans and 720 kegs per hour.

Everything at the factory is automated and moves seemingly at the speed of light, putting on a show. The swirling wort, massive kettles, whizzing cans and bottles, computers and even robot arms are a sight to see.

Two free beers are provided at the tasting, ice cold, the way Orion was meant to be consumed on a hot Okinawa day. Then visitors are unleashed on the Orion factory store where fresh beer is available by can or case, along with a smorgasbord of souvenirs.

COSTS: Brewery tours, including a sampling of Orion beer, are free. Fresh beer and souvenir items are on sale at the brewery store.

FOOD: There is a restaurant on site where food and beer are available for purchase.

INFORMATION: Phone: 0980-54-4103 Brewery tours can be booked on the Orion website, orionbeer.co.jp/brewerytour_en/. They are conducted in Japanese, but English-language materials can be provided upon request.