Pamela Ann, owner of Little Greek Kitchen on Okinawa, said she recently received a diploma from Aristotle University of Thessaloniki in Greece after completing a 144-hour cheese-making seminar to brush up her cheese-crafting skills. (Aya Ichihashi/Stars and Stripes)

Pamela Ann, owner of Little Greek Kitchen on Okinawa, said she recently received a diploma from Aristotle University of Thessaloniki in Greece after completing a 144-hour cheese-making seminar to brush up her cheese-crafting skills. (Aya Ichihashi/Stars and Stripes) 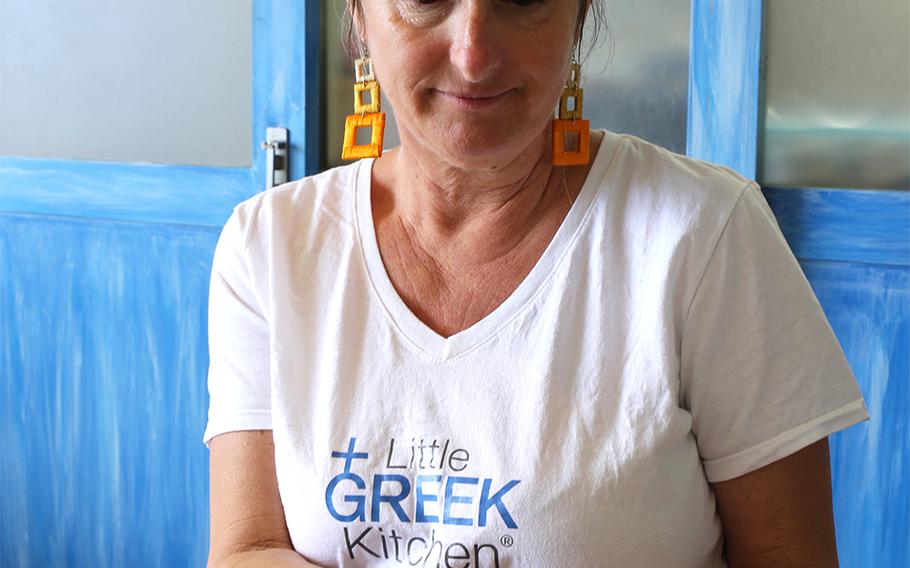 Little Greek Kitchen chef and owner Pamela Ann shows presents her real Greek yogurt, which she makes with raw milk from a local farm that she pasteurizes herself. (Aya Ichihashi/Stars and Stripes) The frozen Greek yogurt with raspberry sauce from Little Greek Kitchen on Okinawa was a refreshing treat after a hearty lunch. (Aya Ichihashi/Stars and Stripes) Little Greek Kitchen boasts a gorgeous view of the Okinawa seaside. Reservations are a must to dine in this cozy and relaxing eatery. (Aya Ichihashi/Stars and Stripes) 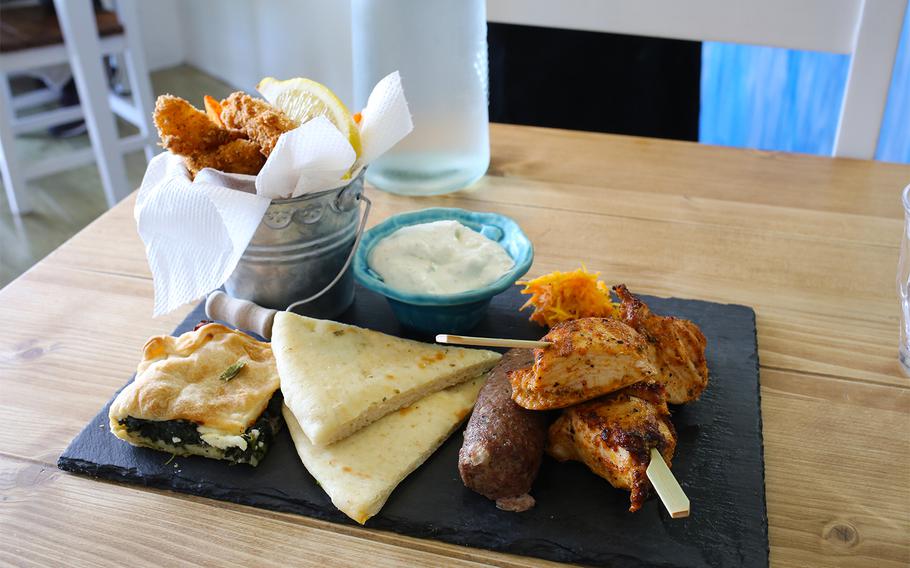 Little Greek Kitchen on Okinawa has a simple policy: everything is made from scratch, even the pita bread. (Aya Ichihashi/Stars and Stripes)

Five years ago, I discovered a lovely Greek restaurant housed in an old metal shipping container on Ikei Island, part of a small island chain on the east side of Okinawa.

It was a rainy but warm fall day and Pamela Ann, the owner and chef, was wearing rain boots and greeting her hungry customers in Japanese and English.

My friend and I were astonished by her delicious homemade Greek cuisine and fell in love with her feta cheese. The restaurant is always packed.

Pamela, 54, is originally from California but lived in the green tea capital of Japan’s Shizuoka prefecture for 15 years before moving to Greece for four years. After moving back to the U.S. for two years, she decided to move to Okinawa.

As her business on Ikei Island grew, she opened the Little Greek Kitchen — an eatery and in-house cheese workshop — at Yomitan in December 2016.

She was right. When I went on a recent Thursday, the restaurant was packed with Americans, locals and tourists from mainland Japan, all of them smiling and enjoying their food in Pamela’s company.

Pamela’s big dream is to expand her cheese production.

“I want to build a bigger factory to comply with demands, as my cheeses got silver and bronze awards at Japan-wide competitions last year,” she said. “I get more business from mainland Japan now.”

She also recently received a diploma from Aristotle University of Thessaloniki in Greece after completing a 144-hour cheese-making seminar to brush up her cheese-crafting skills.

The Little Greek Kitchen has a simple policy: everything is made from scratch, even the pita bread.

No worries if you are a vegan, vegetarian or on a gluten-free diet. Just let Pamela know in advance and she can prepare your meal accordingly for an additional 108 yen for lunch.

I was excited to eat my Greek salad topped with her special “tyri” (feta) cheese. Crunchy cucumbers, olives and tomatoes are even more delicious with the cheese.

Once everyone receives the plates, Pamela explains what’s on the dish in Japanese and English.

She suggests eating with her special tzatziki yogurt sauce, which is made from real Greek yogurt and is surely delicious and refreshing.

Her yogurt is made in-house with no additives or preservatives. She pasteurizes the milk, adds culture and allows it to ferment in a terracotta pot in the traditional Greek way.

I dipped my piece of grilled chicken into the tzatziki, and it was delightful, and so were the catfish fries. I submerged my mutton sausage in the sauce, and it was heavenly. It takes away some of the mutton’s punchy taste and adds more depth with creamy garlic and citrusy flavor.

If you are lucky, you may get to order her special goat yogurt, which is great for someone who suffers lactose intolerance. I finished my meal with a delicious frappe (Greek ice cafe latte) and I could not ask for more.

“I had been searching my goat milk for six years and recently I finally found one locally!,” Pamela said. “I can drink their raw goat milk because it is super smooth and delicious.”

The Little Greek Kitchen has a fantastic view of the East China Sea from the restaurant; it is very cozy and relaxing. Reservations are a must for lunch and dinner; however, Pamela is planning to expand the opening hours starting in November because of the high demand from her hungry customers.

“I may start to deliver my famous souvlaki (Greek gyros) to the near bases soon,” she said.