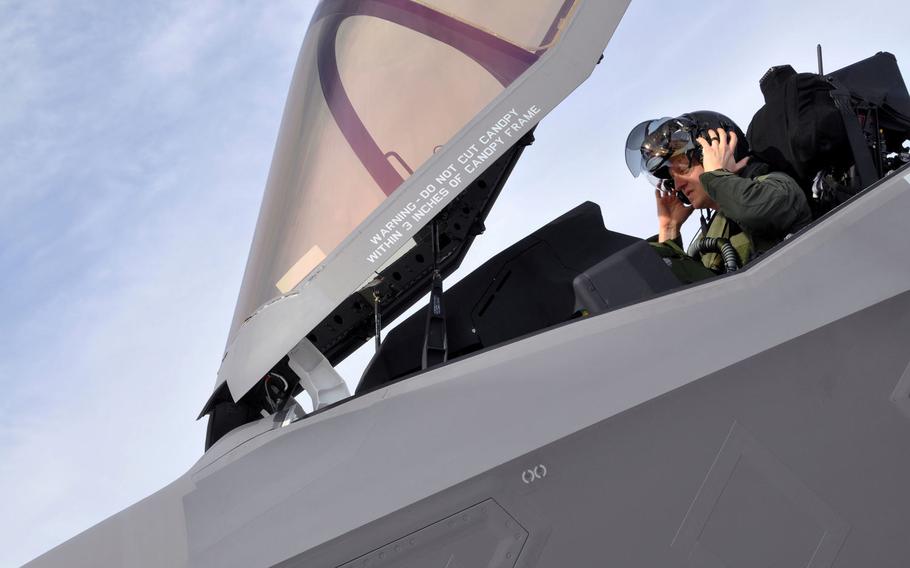 F-35A pilot Lt. Col. Brad Klemesrud prepares for takeoff during a Red Flag mission at Nellis Air Force Base, Nev., on Feb. 2, 2017. The Air Force on Monday announced that it had lifted the weight restriction preventing F-35A pilots weighing less than 136 pounds from flying the aircraft. Fixes have been made to the aircraft's ejection seat and helmet reduce the high risk of severe neck injury to lighter-weight pilots. (Bryan Magana/U.S. Air Force)

KAISERSLAUTERN, Germany — Modifications to the F-35A Lightning II’s ejection seat and helmet mean pilots weighing less than 136 pounds will no longer be restricted from flying the aircraft.

The Air Force announced the change Monday, saying that rigorous testing was done to ensure the joint strike fighter’s pilot escape system was reliable and safe “across all pilot weights.”

“I’ve flown in this seat myself and believe, with these modifications, this is the safest ejection seat I’ve ever flown,” Brig. Gen. Scott L. Pleus, the F-35 Integration Office director, said in a statement.

The restriction was imposed in 2015 because of concerns that F-35 pilots who weigh less than 136 pounds were at high risk of severe or potentially fatal neck injuries while being ejected from the aircraft.

The Defense Department requires that the seat — designed by Martin-Baker — accommodate pilots weighing between 103 and 245 pounds.

The Air Force in a statement Monday said fixes were made to the seat and the helmet. A new switch on the seat slightly delays parachute deployment at high speeds and decreases the load on lighter-weight pilots, the service said. A head support panel was added to the parachute to prevent the pilot’s head from moving backward during an ejection.

The weight of the helmet was reduced by using less internal strapping material and removing an additional external visor, the Air Force said. The helmet — produced by Rockwell Collins — dropped from 5.1 to 4.6 pounds, according to Defense News.

One F-35A pilot was reportedly prevented from flying the aircraft because of the weight restriction, the Air Force said in 2015.

Lockheed Martin’s troubled fifth-generation jet — the most expensive and one of the most controversial weapons contracts in military history — has been criticized for cost overruns and performance shortfalls. President Donald Trump has described the program as “out of control” and has asked Boeing to offer a price for the F-18 Super Hornet, a much older design, as a possible alternative.

The new ejections seats are already being retrofitted into the existing F-35 fleet, and the lightweight helmets are in pre-production, the Air Force said. The service has received more than 100 F-35As to date. More than 400 pilots are trained to fly the aircraft.