Leonhardts is a new restaurant housed at the iconic Stuttgart TV Tower. The tower, which was closed for nearly three years because of fire safety concerns, reopened in January. Leonhardts serves a full menu of main courses and salads, such as this salmon dish. (John Vandiver/Stars and Stripes)

Leonhardts is a new restaurant housed at the iconic Stuttgart TV Tower. The tower, which was closed for nearly three years because of fire safety concerns, reopened in January. Leonhardts serves a full menu of main courses and salads, such as this salmon dish. (John Vandiver/Stars and Stripes) 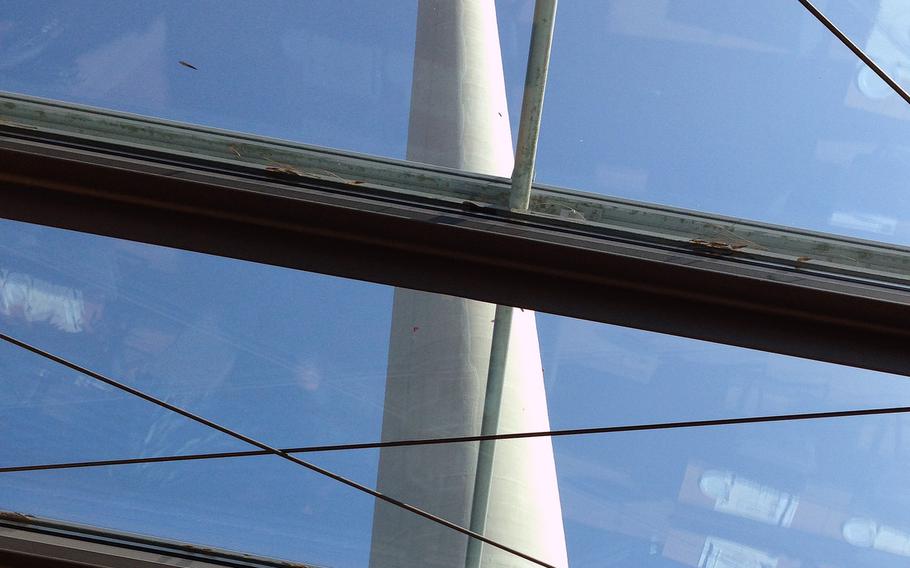 Leonhardts, at the base of the Stuttgart TV Tower, has a section of glass ceiling that offers a nice view of the tower. (John Vandiver/Stars and Stripes) 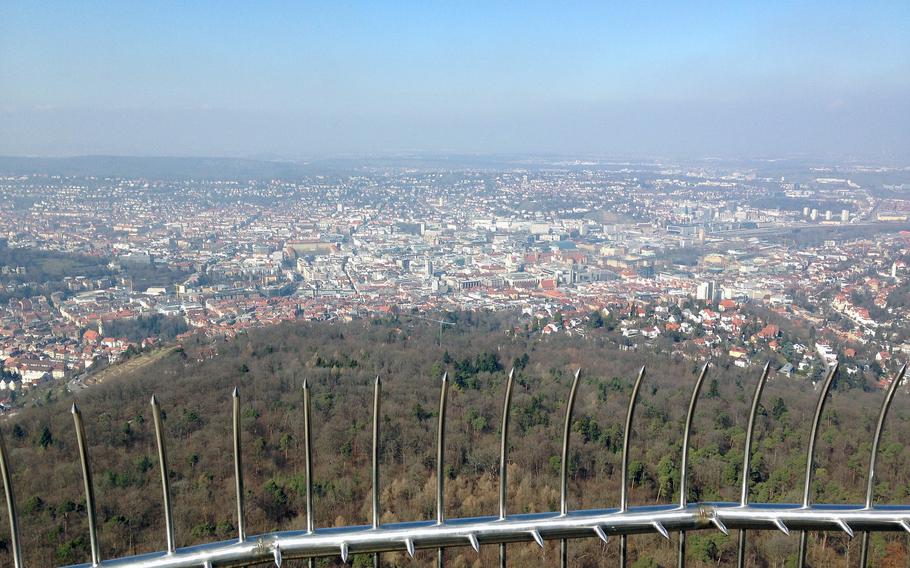 No visit to Leonhardts is complete without going to the top of the Stuttgart TV Tower, which offers a great view of the city below. (John Vandiver/Stars and Stripes)

The 710-foot Stuttgart TV Tower, perched atop a 1,500-foot hill, has long served as one of this city’s most famous landmarks.

But when the tower closed in 2013 because of fire safety concerns, there was hardly any reason to head uphill. That meant hard times for the restaurant situated just below, which went out of business.

But now, with fire safety issues resolved and the tower again open to the public, people are lining up to catch a spectacular, long-missed glimpse of the city below. And to go with the grand reopening is a new restaurant looking to take advantage of the incoming traffic.

Leonhardts began serving a range of local and regional specialties just a couple months ahead of the January reopening of the TV tower. In this part of Germany, local cuisine means Maultasean — a ravioli-like dish — and Spaetzle. There are also various other entrees, such as steaks, pasta, salads and wraps. Tempting and somewhat exotic offerings include the back of a roasted wild hare served in a wild cherry sauce and curried turkey.

For 26 euros, you can have a cut of American roast beef served with potato wedges and coleslaw. The drink menu is heavy on regional offerings: beer from Stuttgart-area brewers and wines from greater Baden Wurttemberg — Rieslings and the ubiquitous Trollinger and Lemberger. On Sundays, brunch is served for 28.50 euros per person.

On a recent lunch visit, I had a small salad surrounded by smoked salmon and a dipping sauce of horseradish topped with a sprinkle of caviar. It was clean, refreshing and somewhat pricey at 12 euros.

Leonhardts’ atmosphere has a laid-back, modern feel, with a glass ceiling that gives a view of the tower above. The ceilings are high, and during the day, natural light pours in.

The restaurant is named after Fritz Leonhardt, an important figure in German engineering history who was one of the key people behind the TV tower’s construction.

The tower, completed in 1956 after two years of building, offers a panoramic view of Stuttgart and the Swabish Alb hills in the distance.

Needless to say, any visit to Leonhardts demands a visit to the top of the tower. The cost to go up is 7 euros.

Conversely, it would be a stretch to say a visit to the tower necessitates a stop at Leonhardts. But it wouldn’t hurt.

Location: Leonhardts is in southern Stuttgart, just off the B-27, at the foot of the Stuttgart TV Tower.