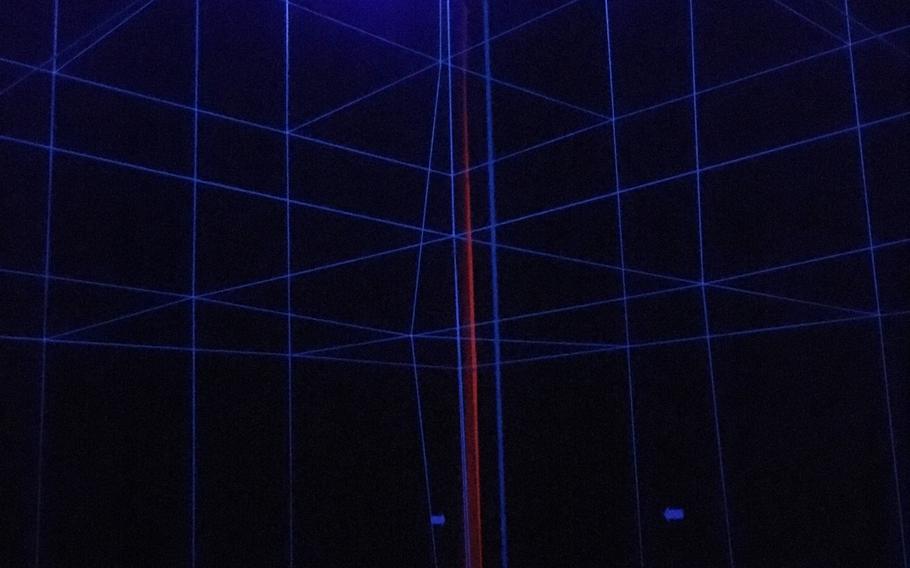 As part of the ''Vertigo'' exhibition at the Kunstmuseum Stuttgart, there are rooms with moving lights and lasers to give viewers a feeling of disorientation. (John Vandiver/Stars and Stripes)

As part of the ''Vertigo'' exhibition at the Kunstmuseum Stuttgart, there are rooms with moving lights and lasers to give viewers a feeling of disorientation. (John Vandiver/Stars and Stripes) 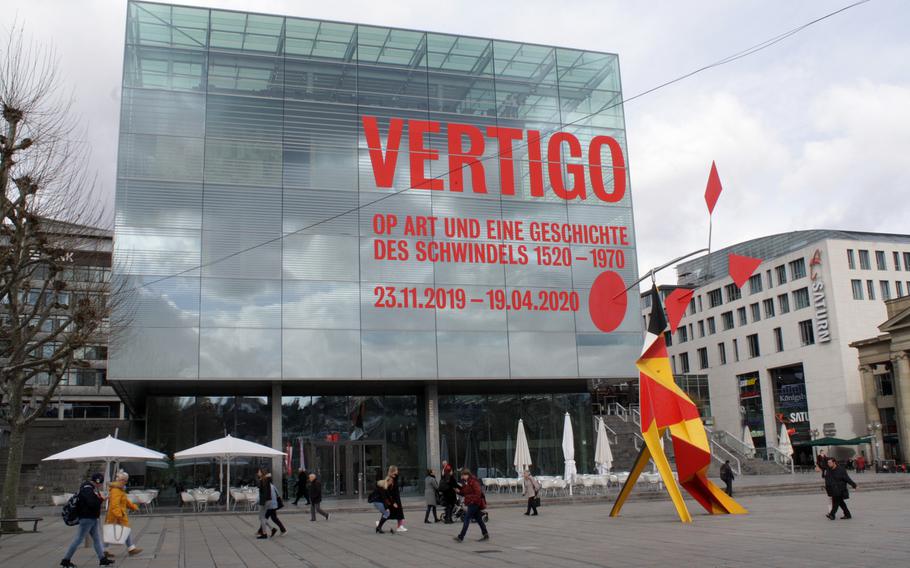 At the Kunstmuseum Stuttgart, special exhibitions are routinely held. The current exhibit theme is ''Vertigo,'' which focuses on artwork with unusual shapes and designs. (John Vandiver/Stars and Stripes) 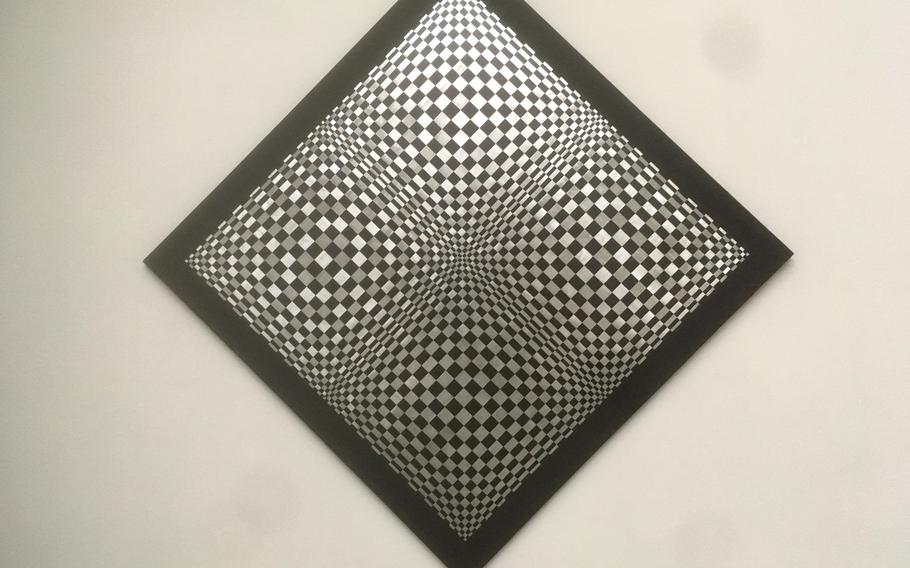 Artwork included in the ''Vertigo'' exhibition at the Kunstmuseum Stuttgart uses unique shapes and spirals that give pictures special optical effects. (John Vandiver/Stars and Stripes)

The title of the latest exhibition emblazoned across the glass cube art museum building caught my eye: “Vertigo.” It must be about Hitchcock, I figured.

At the Kunstmuseum Stuttgart in the center of downtown, exhibitions come and go inside an art house that also is one of Stuttgart’s most recognizable buildings. Normally, the special collections seem to feature highfalutin, artsy affairs for those with refined tastes.

But Hitchcock and movies are for everyone. So I took a chance and bought a ticket for “Vertigo.”

Stepping into the showrooms, it quickly dawned that this wasn’t going to literally be about Alfred Hitchcock, but rather something vaguely inspired by his great 1958 film. Like the movie, the exhibition was exploring the idea of “vertiginous overload,” according to the brochure.

Already out the 11 euros entrance fee, there was no turning back.

The exhibition, which runs until April 14, is focused on pictures that “attack the eye,” as the museum puts it. The range of work dates between the years 1520 and 1970. But many pictures explore art forms especially popular during the 1950s, with a focus on weird geometric patterns, spirals and shapes that aim to disorient.

Somehow, it was pleasing to look at the strange patterns, even for the uninitiated. As proof, groups of children on a school trip also seemed amused, chuckling at the designs. Overall, my initial wariness gave way to something close to appreciation.

The highlights were various rooms that played with light. While there was no mention of Hitchcock to be found anywhere in the exhibit, one room with blinding white light gave something of a fright. The room came with a warning: “Flashing lights can trigger epileptic seizures.”

The room pulsed and felt like an attack on the eyes. There were other rooms with moving lights and lasers. I bumped into a wall at one point, unsure of the room’s contours. It was all about a “rejection of harmony and balance” in favor of “irritation, violent effects and deception,” my brochure told me.

I zipped through the three floor levels of artwork in about a half hour and made my way to the permanent collection. The highlight there was numerous works by the great 20th century German painter Otto Dix, whose creations focused on ragged street people, prostitutes and the gritty underbelly of society.

Somehow, I imagine “the vertiginous overload” of “Vertigo” may not have been up Otto’s alley. But at Kunstmuseum Stuttgart, there’s a little something for most people.

DIRECTIONS: The museum is inside the landmark glass cube building at Stuttgart’s Schlossplatz. There is a U-bahn stop, Schlossplatz, directly in front of the museum.

FOOD: There is a cafe on site and many restaurants nearby.