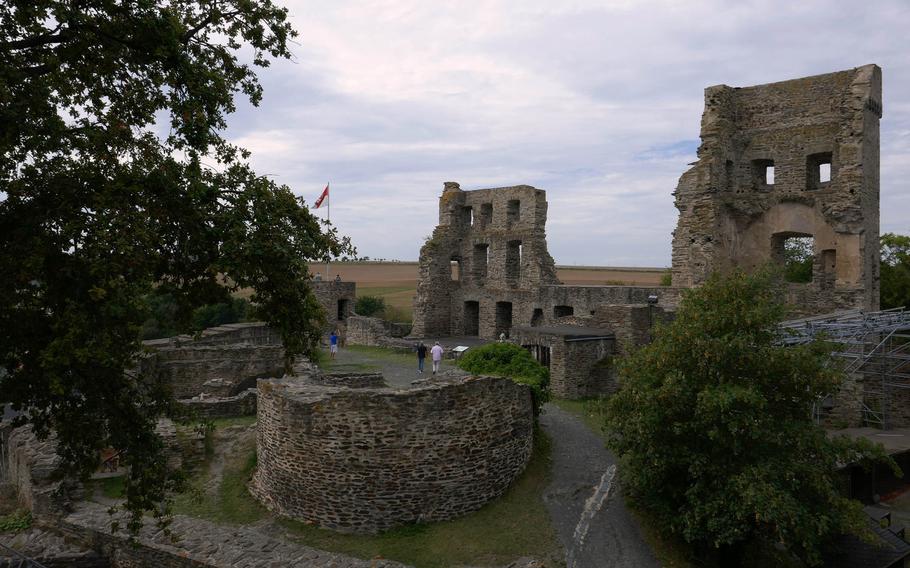 A view of Kastellaun Castle. First built in the 13th century, it was destroyed in the Palatine Succession War in 1698. A rebuilt section housed a regional museum and a tavern. (MICHAEL ABRAMS/STARS AND STRIPES)

A view of Kastellaun Castle. First built in the 13th century, it was destroyed in the Palatine Succession War in 1698. A rebuilt section housed a regional museum and a tavern. (MICHAEL ABRAMS/STARS AND STRIPES) The Kastellauner Boeck on the town's market square. The citizens of the town used to have to pay a levy of two goats to a nobleman. In one famine year, they split a goat in half and arranged it on a wagon to look like two to try to fool the nobleman. It failed, but the attempt has gone down in local lore. (MICHAEL ABRAMS/STARS AND STRIPES) A pair of bicyclists pass by two half-timbered houses on an old cobblestone street in Kastellaun. Although the town and the countryside are quite hilly, it's still popular for cycling and hiking in Germany's Hunsrueck region. (MICHAEL ABRAMS/STARS AND STRIPES) 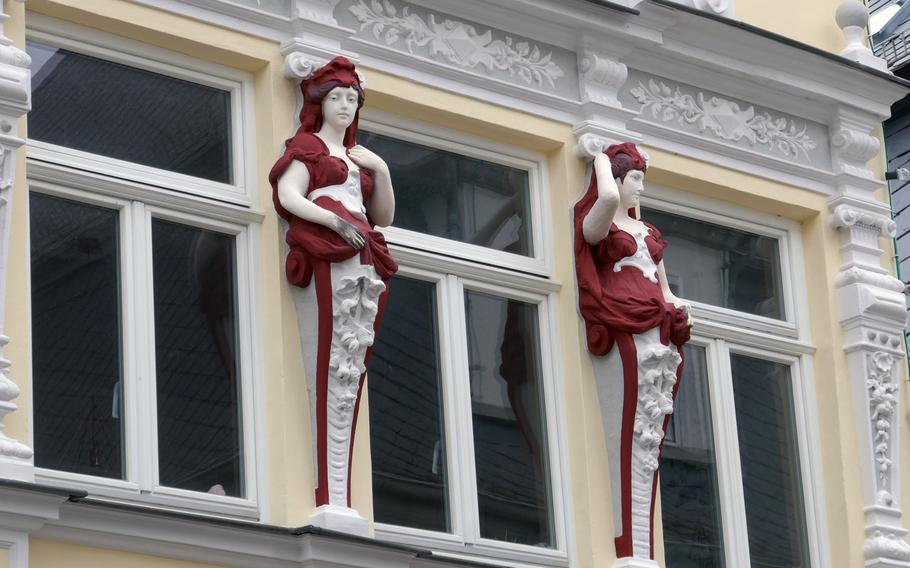 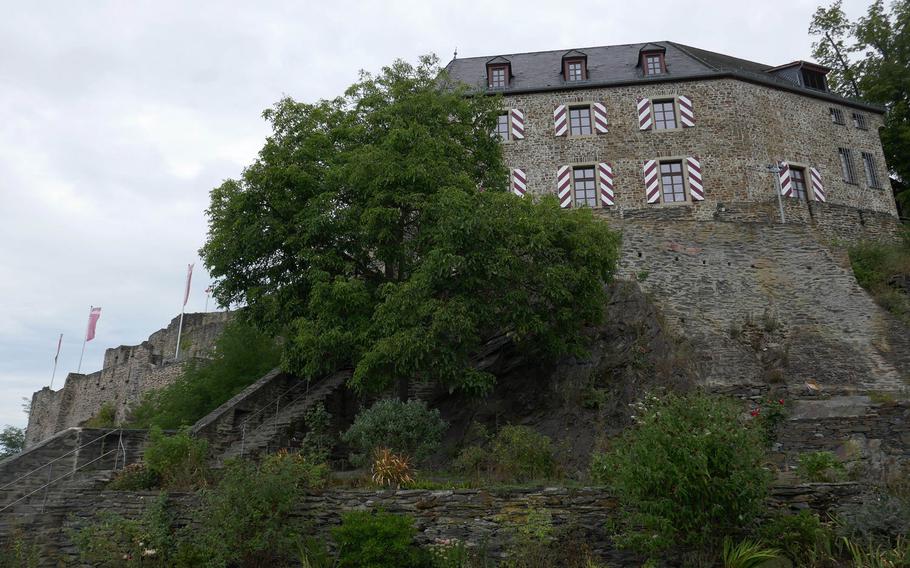 A view of Kastellaun Castle from the stairs that lead up to it from Vordere Eifelstrasse starting in Kastellaun's old town. While most of the castle is in ruins, the building with the colorful shutters hosts a local museum and a tavern. (MICHAEL ABRAMS/STARS AND STRIPES) 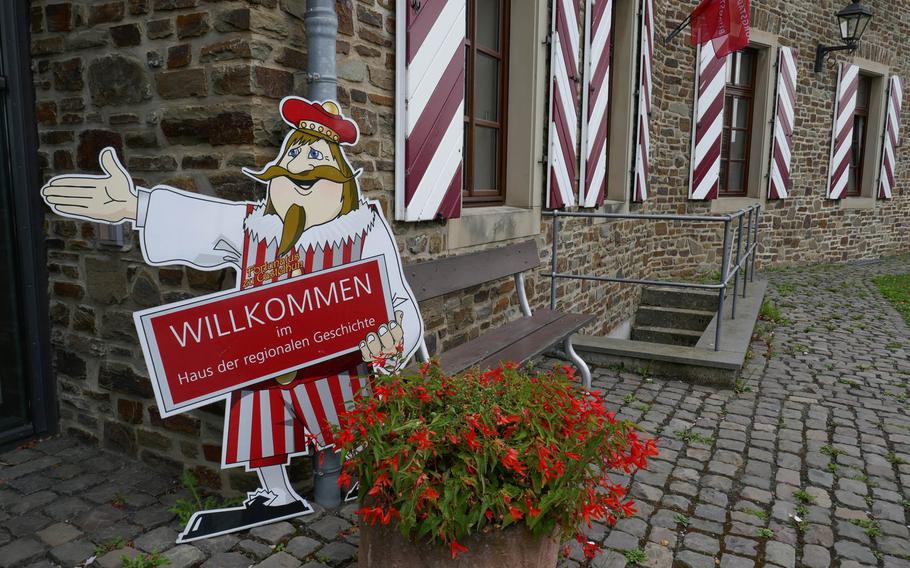 A margrave welcomes you to the house of regional history, a small museum in Kastellaun Castle. It features finds from the local area dating all the way back to the Celts. (MICHAEL ABRAMS/STARS AND STRIPES) 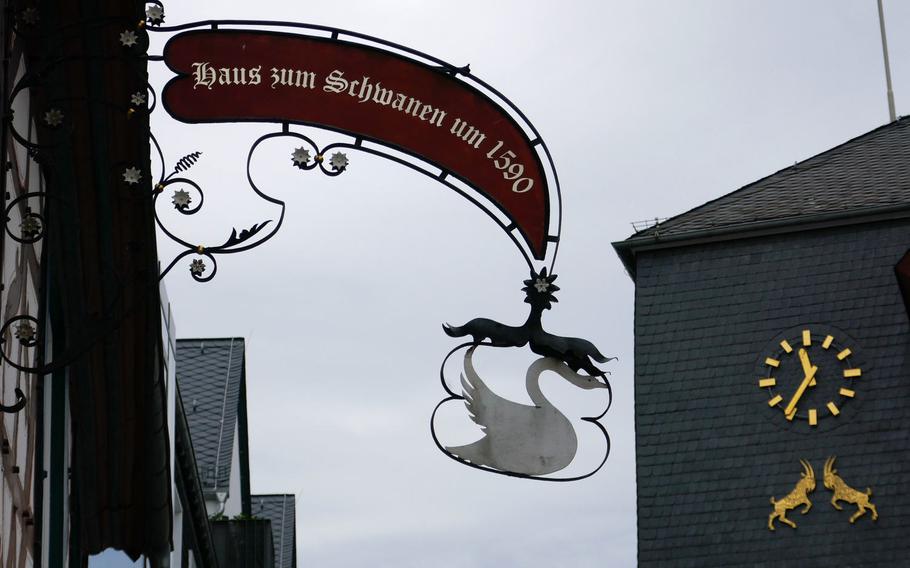 The Haus zum Schwanen is a beautiful late 16th-century half-timbered house in Kastellaun, Germany. In the background is the city hall clock with two goats, the trademark of the town. (MICHAEL ABRAMS/STARS AND STRIPES) 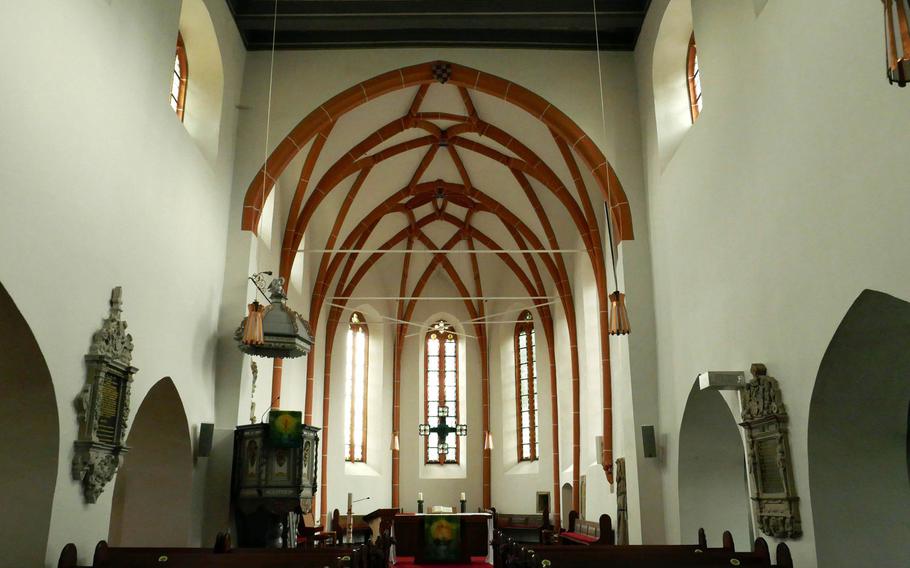 Inside the Kastellaun, Germany, Protestant church. Built in the 14th century, it was a Catholic church until the Reformation in the 16th century. (MICHAEL ABRAMS/STARS AND STRIPES) 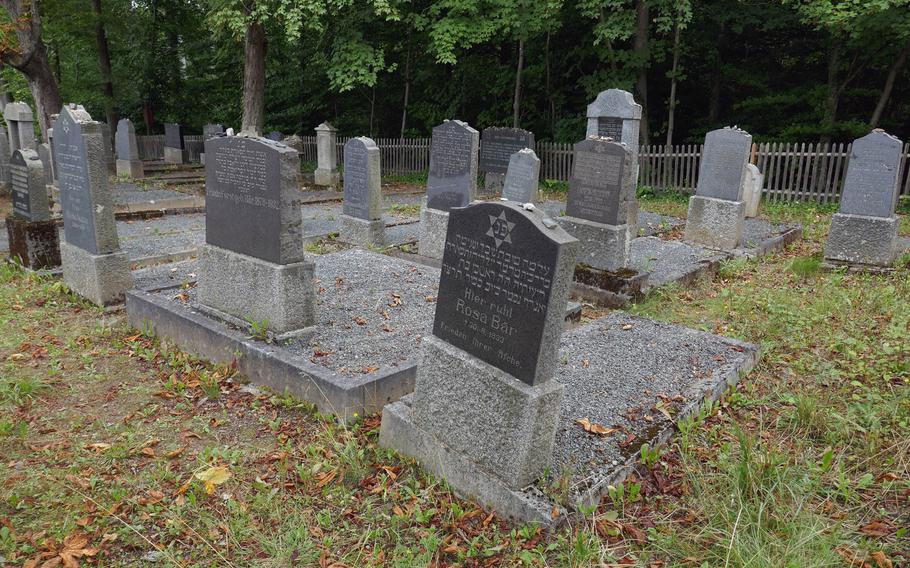 The small Jewish cemetery on the outskirts of Kastellaun, Germany. According to the laws of the times it had to be beyond the town limits. The town's synagogue was destroyed by the Nazis in the 1930s. (MICHAEL ABRAMS/STARS AND STRIPES)

The Hunsrueck region of Germany — an area of rolling hills between the Rhine, Moselle and Nahe rivers — has quite a bit to offer the traveler or adventurer.

There are numerous hiking and biking trails, quaint towns and stately castles and one of the longest pedestrian suspension bridges in Germany.

One of those old towns with impressive castle ruins is Kastellaun.

The castle was built in the mid-13th century by the counts of Sponheim. Although they used it, only one of them, Simon II, actually lived there.

It was continuously expanded through the centuries and another nobleman, Eduard Fortunates of Baden, took up residence in 1595. Despite his name, he wasn’t too fortunate, dying there in 1600, following a fall on the castle stairs.

The castle and town didn’t fare too well either. During the Thirty Years War they were occupied by various factions, and plague ravaged its inhabitants.

Finally, in 1698, the town and castle were destroyed by Louis XIV’s French troops during the War of Palatine Succession.

In the early 19th century, the ruins were used as a quarry — you can still see some of its stones in the walls of many Kastellaun houses. In 1884, the town bought the castle and extensively restored it in the 1990s.

Romping around the ruins can be fun, and you can tell it must have once been quite imposing.

You can climb the renovated tower for a good view of the castle grounds, the town and the countryside.

The one building that has been thoroughly rebuilt hosts a tavern and the House of Regional History. A small museum is quite interesting, if you understand German. It traces local history from the Celts and Romans to the Middle Ages and to the end of the Cold War.

In the 1980s, Kastellaun was a focal point of the German peace movement because U.S. Pershing II missiles were to be stationed at a base nearby. The Cold War ended, the military left and for the past 25 years the grounds were the site of one of Germany’s biggest Techno festivals, Nature One — canceled this year due to the coronavirus epidemic.

Back in town, there are several interesting things to see.

The Catholic church at the foot of the castle is only about 120 years old, but is worth a peek inside for its sculptures. The Protestant church is much older, built in the 14th century. Like many old churches in parts of Germany, it was a Catholic church until the Reformation in the 16th century. From 1688 to 1894, both congregations used it.

A couple of houses along Marktstrasse are worth a gander as well. The Haus zum Schwanen is a beautiful late 16th-century half-timbered house with an ornate cast-iron sign featuring a swan hanging over the door.

Another building with a fascinating facade is Haus Colditz. Built early in the 19th century, it was remodeled toward the end of that century in a striking art nouveau style. Two life-size female figures adorn its facade. Today it houses the town’s tourist information office.

On the marketplace stands an interesting statue: a goat, split in half. It’s the Kastellauner Boeck. The town’s citizens once had to pay an annual levy of two goats to a nobleman. In one famine year, they split a goat in half and arranged it on a wagon to look like two animals, trying to fool the nobleman. The ruse failed, but the attempt has gone down in local lore.

There is a small stone monument on Eifelstrasse, marking where the town’s synagogue once stood, before being destroyed by the Nazis in 1938. On the outskirts of town however, on Hasselbacher Strasse, the old Jewish cemetery still remains. According to the laws of the times, it had to be beyond the town limits.

DIRECTIONS: From Wiesbaden, take autobahn A643 to A60 towards Bingen, then A61 towards Koblenz. Exit at Rheinboellen and head towards Simmern and Hahn airport on highway B50. Exit at Ellern and head towards Wallbach and Kastellaun. About a 60-mile drive.

From Kaiserslautern, take A6 to A63 to A61, head toward Koblenz, then follow the directions above. From Baumholder take A62 to Birkenfeld, then B269 to B327/B50 to Sohren/Baerenbach to L193 to B327 to Kastellaun.

TIMES: Anytime, best when the weather is nice. The regional history museum is open from noon to 5 p.m. Thursday to Sunday.

FOOD: There are a variety of restaurants and cafes in Kastellaun. The cafe on the market square is popular for breakfast and lunch. The castle tavern opens at 5 p.m. Thursday-Saturday and at 11 a.m. on Sunday.