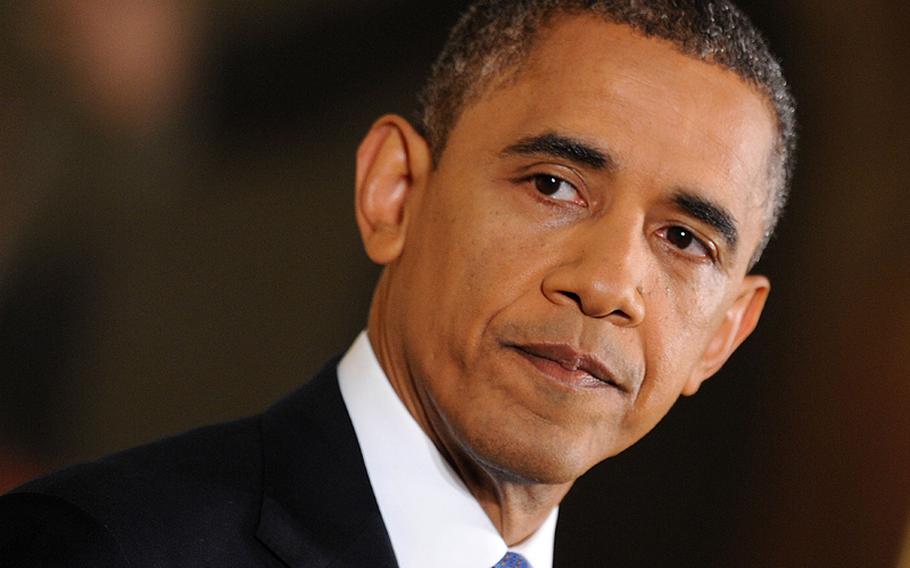 U.S. President Barack Obama speaks during his a press conference in the East Room of the White House on November 14, 2012 in Washington, DC. (Olivier Douliery, Abaca Press/MCT)

Two defendants in military sexual assault cases cannot be punitively discharged, if found guilty, because of “unlawful command influence” derived from comments made by President Barack Obama, a judge ruled in a Hawaii military court this week.

Navy Judge Cmdr. Marcus Fulton ruled during pretrial hearings in two sexual assault cases — U.S. vs. Johnson and U.S. vs. Fuentes — that comments made by Obama as commander in chief would unduly influence any potential sentencing, according to a court documents obtained by Stars and Stripes.

On Wednesday and Thursday, Fulton approved the pretrial defense motions, which used as evidence comments that Obama made about sexual assault at a May 7 news conference.

“The bottom line is: I have no tolerance for this,” Obama said, according to an NBC News story submitted as evidence by defense attorneys in the sexual assault cases.

‘I expect consequences,” Obama added. “So I don’t just want more speeches or awareness programs or training, but ultimately folks look the other way. If we find out somebody’s engaging in this, they’ve got to be held accountable — prosecuted, stripped of their positions, court martialed, fired, dishonorably discharged. Period.”

The judge’s pretrial ruling means that if either defendant is found guilty, whether by a jury or a military judge, they cannot receive a bad conduct discharge or a dishonorable discharge. Sailors found guilty under the Uniform Code of Military Justice’s Article 120, which covers several sexual crimes including assault and rape, generally receive punitive discharges.

“The strain on the system created by asking a convening authority to disregard [Obama’s] statement in this environment would be too much to sustain public confidence.”

The ruling sets the stage for defense attorneys to use the same arguments in sexual assault cases throughout the military.

“I think that as a defense attorney, I would raise this argument in virtually any [sexual assault] case I had,” said Victor Hansen, vice president of the National Institute of Military Justice and former instructor at the Army’s JAG school.

Hansen found Thursday’s ruling surprising, since judges have rejected “unlawful command influence” arguments under the logic that statements by high-level officials lose their effect as they reach the military’s lower levels.

However, in recent months there has been a lot more said — and in overly specific terms — about sexual assault by military and political leaders, Hansen noted. Obama’s call for dishonorable discharges is an example of such specificity, which begins to sound to military juries like a direct order from the commander in chief.

“This is bad lawyering on [Obama’s] advisor’s part,” Hansen said. “It’s certainly not a problem to say that sexual assault is a bad thing and we need to weed it out … that’s innocuous. It’s when they get very pointed that it’s problematic.”

In one speech, Amos declared that 80 percent of sexual assault claims were legitimate, according to the report. Judges in nearly all of the 60 disputed cases found the appearance of unlawful command influence, according to the McClatchy report.

When contacted by Stars and Stripes, Navy legal officials in Hawaii deferred comment to the officials at the Office of the Judge Advocate General in Washington, D.C.

JAG officials in Washington said they could not comment because of potential conflicts with any appeals arising from the ruling, but confirmed the court document’s authenticity. The White House had no immediate response when asked for comment.

Obama’s comments came after a Defense Department report stated that 3,374 incidents of “unwanted sexual contact” occurred during fiscal year 2012, a 6 percent increase over the prior year.

A secondary survey reported that if the 6.1 percent of women and 1.8 percent of men who said they experienced unwanted sexual contact are extrapolated to include the entire military, about 26,000 servicemembers may have been victimized in 2012.

The reports led to heightened public and congressional scrutiny of the military’s handling of sexual assault.

On Tuesday, the Senate Armed Service Committee voted down a proposal that would have transferred authority over military sexual assault cases to independent prosecutors. Instead, committee chairman Carl Levin, D-Mich., included a clause in a markup of next year’s defense bill that would require high-level review of decisions made by commanders not to prosecute sexual assault cases.