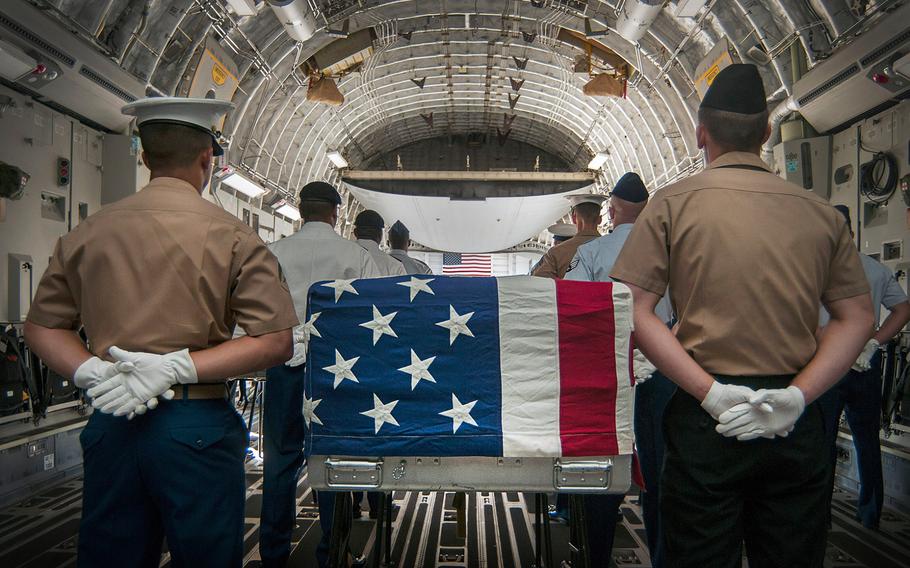 An honor detail comprised of joint military members prepares to escort the remains of fallen servicemembers who died during World War II and the Vietnam War during an arrival ceremony April 26, 2013, hosted by the U.S. Joint POW/MIA Accounting Command. (Sean FureyU.S. Navy)

An honor detail comprised of joint military members prepares to escort the remains of fallen servicemembers who died during World War II and the Vietnam War during an arrival ceremony April 26, 2013, hosted by the U.S. Joint POW/MIA Accounting Command. (Sean FureyU.S. Navy) 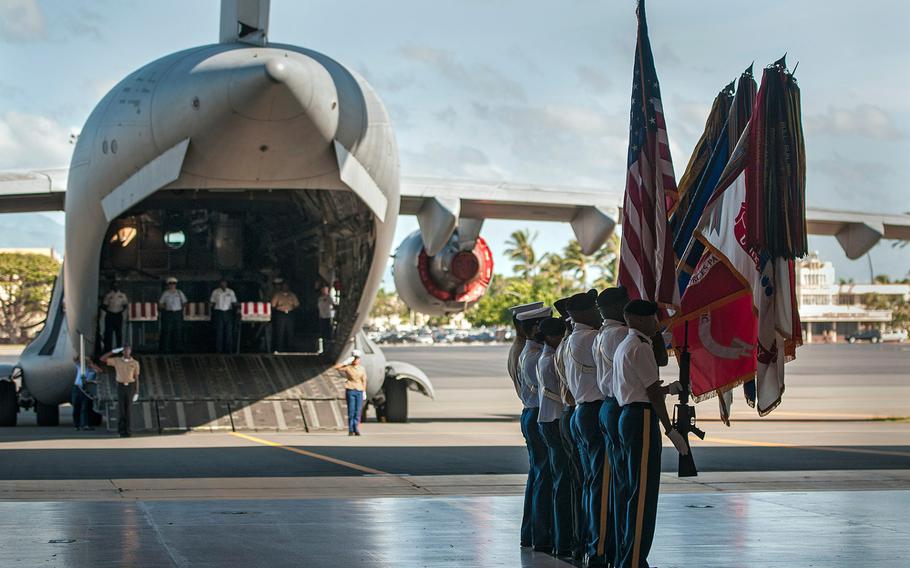 An honor detail comprised of joint military members prepares to escort the remains of fallen servicemembers who died during World War II and the Vietnam War during an arrival ceremony April 26, 2013, hosted by the U.S. Joint POW/MIA Accounting Command. (Sean Furey/U.S. Navy)

WASHINGTON — The Department of Defense unit charged with recovering servicemembers’ remains abroad has been holding phony “arrival ceremonies” for seven years, with an honor guard carrying flag-draped coffins off of a cargo plane as though they held the remains returning that day from old battlefields.

The Pentagon acknowledged Wednesday that no honored dead were in fact arriving, and that the planes used in the ceremonies often couldn’t even fly, and were towed into position. The story was first reported on nbcnews.com.

The ceremonies at Joint Base Pearl Harbor-Hickam in Hawaii are held up as a sign of the nation’s commitment to its fallen warriors. They have been attended by veterans and families of MIAs, led to believe that they were witnessing the return of Americans killed in World War II, Vietnam and Korea.

In a statement sent to NBC News, the Pentagon wrote:

“Part of the ceremony involves symbolically transferring the recovered remains from an aircraft to a vehicle for follow-on transportation to the lab. Many times, static aircraft are used for the ceremonies, as operational requirements dictate flight schedules and aircraft availability. This transfer symbolizes the arrival of our fallen servicemembers.

“It is important to note that recovered remains ceremoniously transferred from the aircraft to the [bus] have been in the lab undergoing forensic analysis to determine identity. When remains first arrive in Hawaii, JPAC cannot confirm if the remains are those of an American servicemember.”

NBC writes that the ceremonies have been known among some of the military and civilian staff at the base as The Big Lie.

The Joint POW/MIA Accounting Command, or JPAC, has come under intense scrutiny in recent months after two scathing reports were released this summer.

In July, The Associated Press ran a story exposing a 2012 internal JPAC report that found the agency to be “acutely dysfunctional” with some missions that amounted to little more than paid vacations for staffers.

A second investigation released weeks later by the Government Accountability Office found that Pentagon efforts to account for fallen troops missing overseas were inefficient and in need of overhaul, according to congressional sources.

In 2010, lawmakers mandated JPAC to reach an annual goal of recovering at least 200 fallen troops from overseas battlefields by 2015, but it had failed to build the capacity to do so, the GAO found. Currently the Hawaii-based command averages less than 70 individuals per year.

Much of the inefficiency found by the GAO researchers comes down to a turf war between JPAC and the Defense Prisoner of War/Missing Personnel Office, which shares some of the same responsibilities, Congressional sources said.

According to the NBC report, here’s what the audience was shown:

A C-17 military transport aircraft was parked, its ramp down, outside a hangar at the base. After generals and dignitaries were introduced, a military chaplain said a prayer, the audience sang “The Star-Spangled Banner,” and “Taps” was played. Then an honor guard carried flag-draped transfer cases, which look like coffins, down the ramp and placed them in the back of blue buses, which were driven away.

The emcee thanked the audience for “welcoming them home.” The script continued, “After removal from the aircraft, the remains will be taken to the Joint POW/MIA Accounting Command’s Central Identification Laboratory. There, JPAC scientists will begin the identification process.”

Citing eyewitnesses and photographs taken behind the scenes, NBC wrote that what actually happened is very different:

Before 6 a.m., the honor guard assembled behind the JPAC headquarters on the base. They loaded transfer cases onto the buses and drove to the hangar.

The honor guard loaded the transfer cases into the pre-positioned C-17, then rehearsed for the ceremony. They then returned to the plane, and waited.

The public was allowed in for the 9 a.m. ceremony: invited politicians, media, families of the missing and veterans. Employees from JPAC were bused over to fill out the crowd.

Then the show began, with tears and salutes as the remains were marched to the buses, then driven off to the lab to “begin the identification process.”

Jesse Baker, an 81-year-old Air Force veteran of World War II and Korea living in Honolulu, told NBC News that he has been to more than 50 of these ceremonies. He said he’s always been under the impression that the plane had just arrived carrying recovered remains.

Baker tried to make sense of why the DOD would work so hard to trick him and other veterans. “That’s disturbing. I don’t know when they stopped being honest and switched over to this Mickey Mouse, but whoever did it, I hope they find him a new job somewhere.”