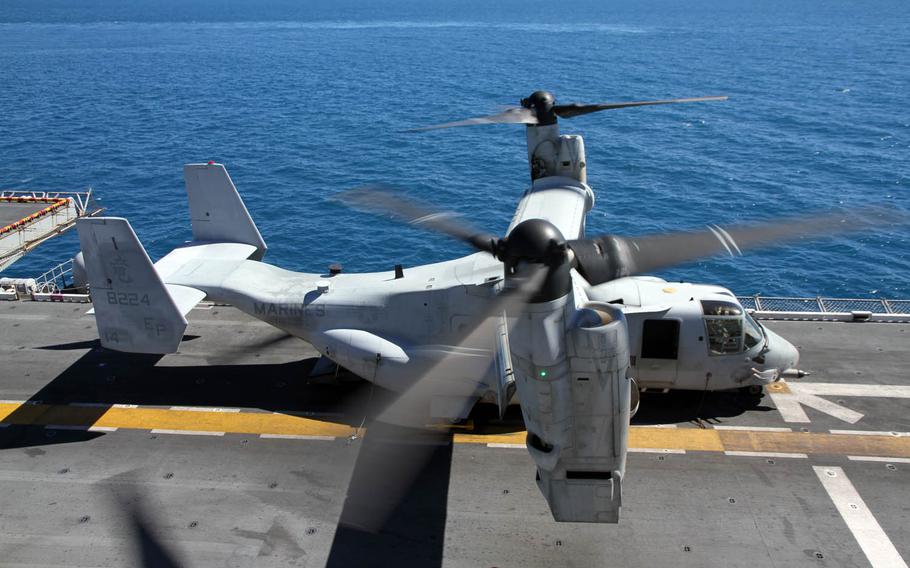 “I have requested that they refrain from all flight operations by MV-22 Ospreys in Japan,” newly appointed Defense Minister Itsunori Onodera told reporters Sunday.

Onodera – who took over last week after the embattled Tomomi Inada resigned after a data cover-up scandal – also called on the Marines to provide information on the crash, to investigate its cause and to take preventative measures, a ministry spokeswoman said Monday.

As of Monday afternoon in Japan, Marine officials had not responded to Onodera’s request or to requests for comment from Stars and Stripes.

The helicopter-plane hybrid from Marine Medium Tiltrotor Squadron 265 crashed into the sea around 4 p.m. Saturday after taking off from the USS Bonhomme Richard for regularly scheduled operations, Marine officials said in a series of weekend statements.

The aircraft carrying 26 Marines was approaching the USS Green Bay when it smashed into the amphibious transport dock ship’s deck and slid into the ocean, the Brisbane-based Courier-Mail newspaper reported.

All but three of the Marines were rescued, statements and media reports said.

The search for the missing Marines was called off around 3 a.m. Sunday local time. The crash’s cause is under investigation.

The families of the three Marines have been notified; however, their names have yet to be released.

After a shaky development history that included several high-profile crashes, the Osprey became a symbol of the anti-base resistance on Okinawa when it arrived on the island in 2012. The aircraft has since been the focal point of near daily protests, and expelling it from the island was among Gov. Takeshi Onaga’s major campaign promises.

Saturday’s crash could complicate the joint Northern Viper exercise, set to kick off between Marines and the Japan Ground Self-Defense Force Thursday in Hokkaido. Six Ospreys are scheduled to participate, a defense ministry spokeswoman said.

“We will coordinate with the U.S. side on the handling of the participation of MV-22 Ospreys in this training based on the request,” Onodera said. “Based on the understanding that securing safety is the major premise, we will urge the U.S. side to take maximum consideration to safety and to minimize the impact to the local residents.”

“We regret that it flew even though the defense minister requested that they refrain from flying,” said Deputy Gov. Moritake Tomikawa. “It is regrettable and a great shock to the people of Okinawa where Ospreys fly daily.”

The Courier-Mail identified Osprey crew chief Cpl. Nathan Ordway, of Wichita, Kan., as one of the Marines who died.

The family of Marine aviator 1st Lt. Benjamin Robert Cross, 26, told the Portland Press Herald in Maine that he was one of the lost Marines.

Cross, who attended the Virginia Military Institute on a full scholarship, had been stationed on Okinawa for the past year and had been training in Australia for the past three months, the newspaper reported.

“My brother, all through high school, knew he wanted to be a pilot in the military. It had been his dream,” his older brother, Ryan Cross, told CBS News Radio’s Matt Pieper on Sunday. “It probably sounds cliché, but you know, words really can’t describe my little brother. He was … the type of person everybody wishes they knew.”

The Osprey and the 31st Marine Expeditionary Unit Marines on board were in Australia for Talisman Saber 2017, a monthlong biennial exercise that wrapped up at the end of July. This year’s exercise, which was planned by the U.S. and Australia, was the largest ever and included more than 33,000 troops, 26 ships and 200 aircraft.