Buy Photo
Piazza Falminio is the heart of the oldest part of Serravalle, one of two communities that make up Vittorio Veneto in northeastern Italy. The most prominent building, the Loggia Serravallese in the upper right, dates back to at least the 15th Century and currently houses the Museo Del Cenedese. (Kent Harris/Stars and Stripes)

Buy Photo
Piazza Falminio is the heart of the oldest part of Serravalle, one of two communities that make up Vittorio Veneto in northeastern Italy. The most prominent building, the Loggia Serravallese in the upper right, dates back to at least the 15th Century and currently houses the Museo Del Cenedese. (Kent Harris/Stars and Stripes) 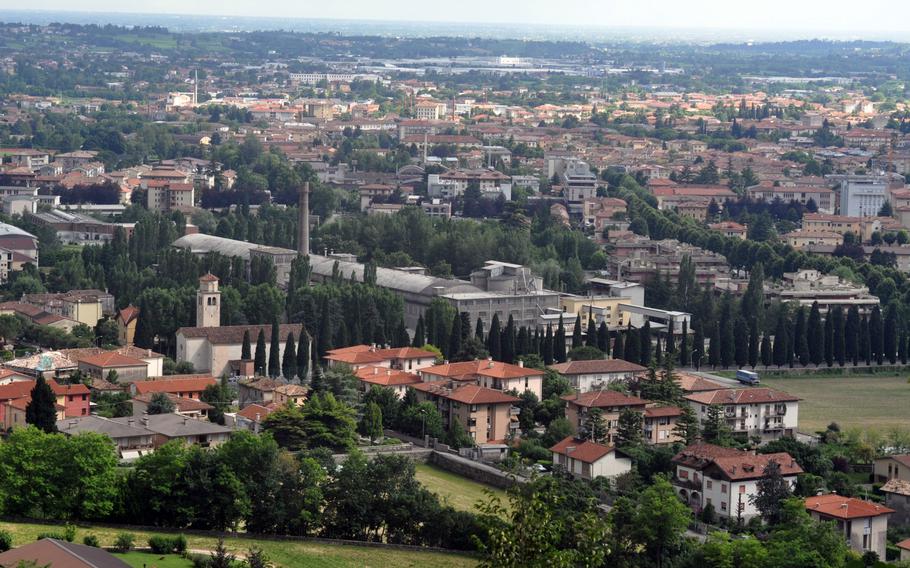 Buy Photo
Vittorio Veneto, which sits at the foot of the Dolomite mountain chain, is heavily urbanized. But it's not that difficult to climb up a small mountain for fine views. (Kent Harris/Stars and Stripes) 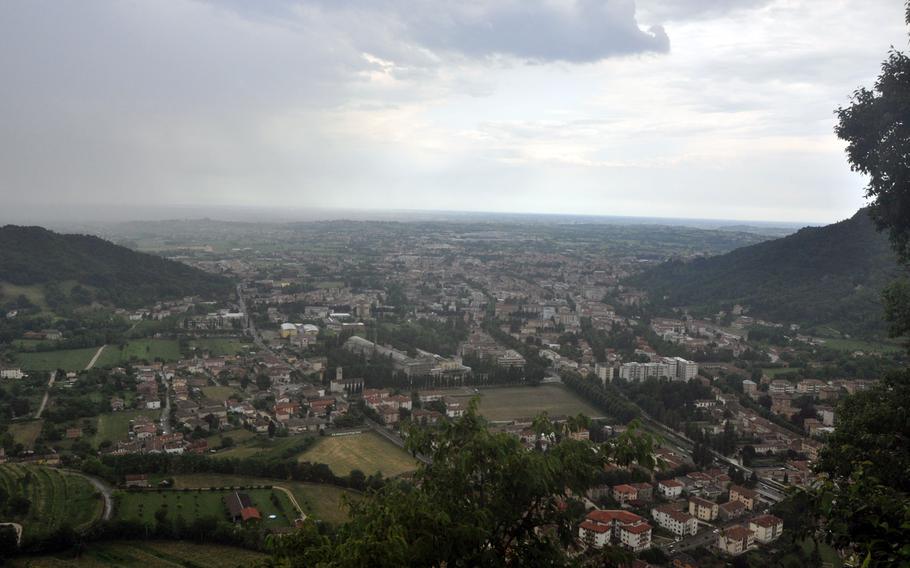 Buy Photo
It's possible to see for from the porch of the Santuario di Santa Augusta, which overlooks the community of Vittorio Veneto in northern Italy - even on stormy days. You'll have to spend some energy getting there, though, climbing up a winding path to the top. (Kent Harris/Stars and Stripes) 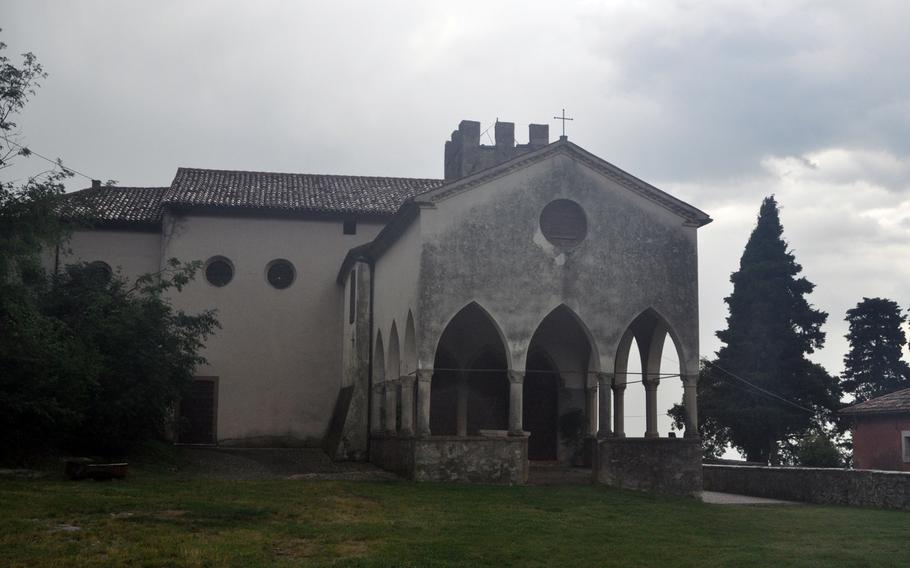 Buy Photo
The Santuario di Santa Augusta doesn't look like much from the outside. But it offers fine views of the Vittorio Veneto area. (Kent Harris/Stars and Stripes) 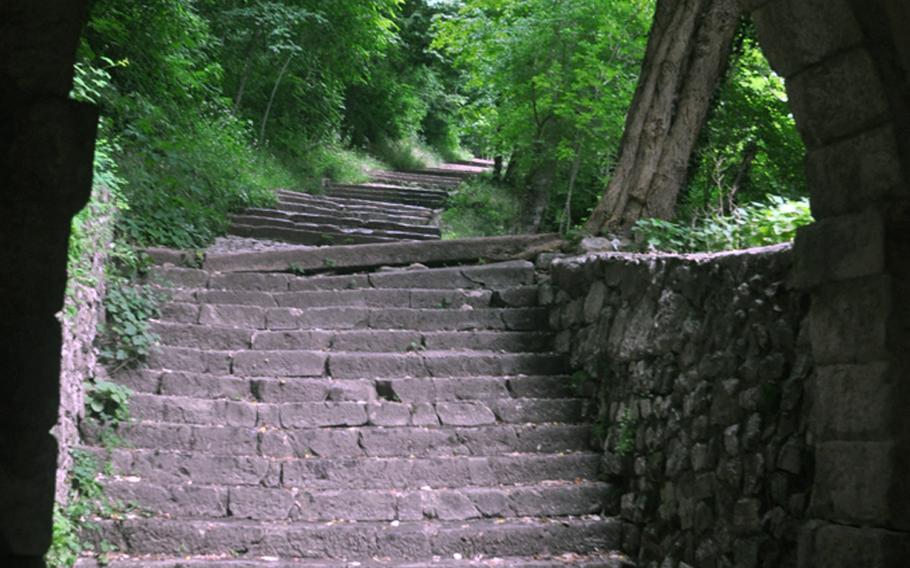 Buy Photo
The path up to the Santuario di Santa Augusta consists of a series of stairways and cobblestone walkways - mostly covered by trees. (Kent Harris/Stars and Stripes) 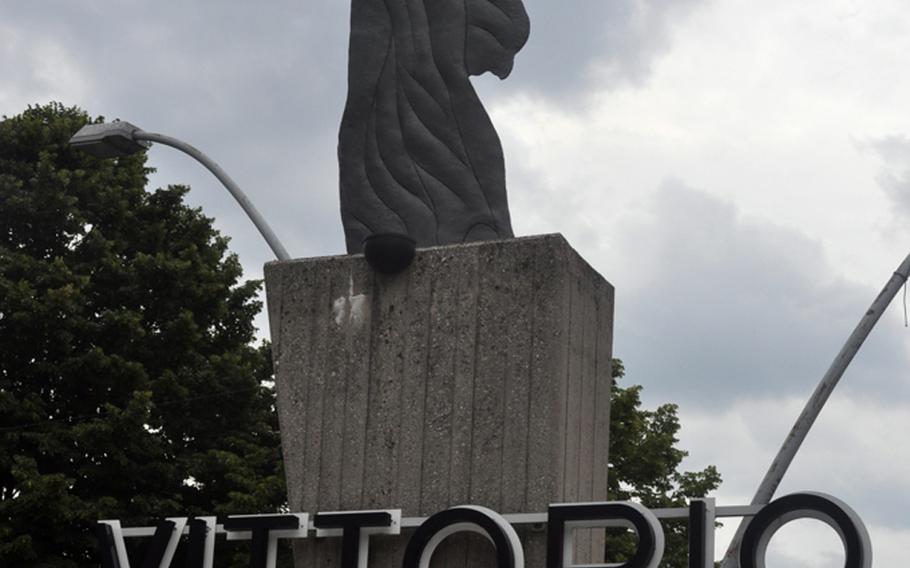 Buy Photo
The city of Vittorio Veneto only dates back about 150 years. It was created by merging two communities - Serravalle and Ceneda - in 1866 as the area became a part of a unified Italy. It was named after an Italian king. (Kent Harris/Stars and Stripes) 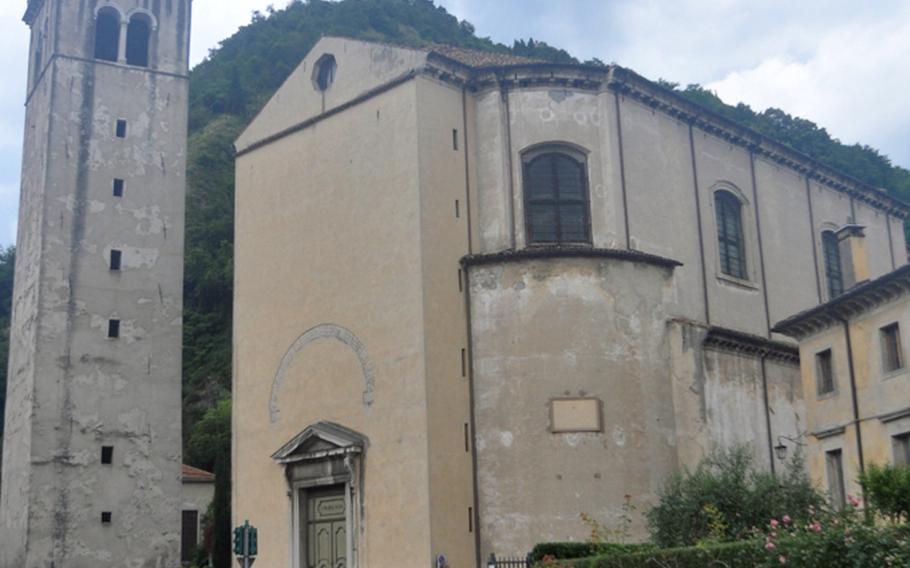 Buy Photo
The Dumo (cathedral) in Serravalle was rebuilt in the1800s, though never fully completed. It's on the other side of the Meschio river from Piazza Flaminio. The bell tower dates back to an earlier church constructed several centuries earlier. (Kent Harris/Stars and Stripes) 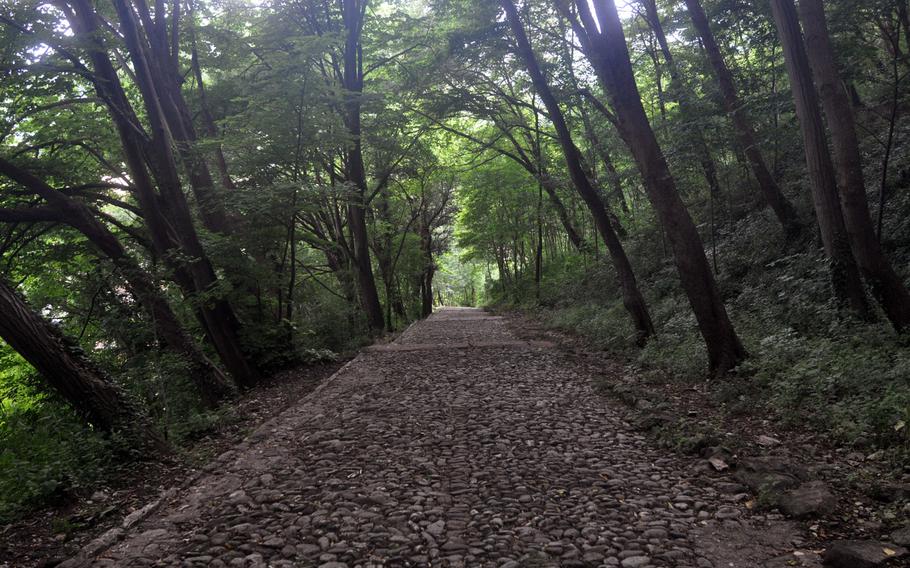 Buy Photo
The path leading from the cathedral up to the Santuario di Santa Augusta is well maintained and sheltered almost the entire way by trees. It'll take an hour or so to hike up, past a series of smaller chapels to the main one. Those who make the trip are rewarded with sweeping views of the area. (Kent Harris/Stars and Stripes)

While traveling around Italy, when you go might not be as important as where you go. But it can be pretty close sometimes.

For example, visitors to the city of Vittorio Veneto, west of Aviano Air Base, would find a lot more to experience on a weekend, when museums, churches and other attractions are open. It is also advisable to visit in the morning or late afternoon and avoid the extended lunch period when many things are closed.

There’s plenty of history in this city, though its name dates only to 1866. Before that, there was only Serravalle — which dates to Roman times — and Ceneda — believed to have origins around the Middle Ages.

When the area joined a united Italy, the two merged into one community (named after Italy’s king) — though many local residents still identify themselves as coming from either community.

If you decide to take the northern exit off the A27 autostrada, there’s a free parking lot on the outskirts of the city just past the city entrance sign. Walk south from there along the Via Caprera, a mostly residential street. Take a quick look in at the frescoes to the right of the entrance in the Chiesa San Giovanni Battista along the way.

Piazza Flaminio is the heart of the old part of Serravalle. The Loggia Serravallese, located in the northwest corner of the square, is the most distinctive building. It’s the former seat of political power and dates to at least the 15th century. It’s also home of the Museo del Cenedese, which features archaeological finds.

Cross the bridge over the Meschio River and you’ll arrive at the Duomo di Serravalle (cathedral). There, you can view frescoes on the ceiling by Titian.

If you’re up for some exercise and have several hours to spare, head around the back of the cathedral and walk past the statue of Santa Augusta to a pathway leading up the mountain to the Santuario di Santa Augusta.

You’ll pass by six chapels along the way, traversing a well-maintained path of cobblestones and stone stairways mostly shaded by trees. You’ll eventually be rewarded with sweeping views of the entire area, even on cloudy days. Bring some water or even a picnic. There are a few spots to sit and catch your breath along the way and several places around the sanctuary.

For those searching for a quick snack in town, there’s a gelateria in Piazza Flaminio. There are others further south in the more modern areas of the city, along with a slew of restaurants.

In fact, those looking to try out a new place to eat could spend a few weeks doing so at the dozens of places that line the SP71 that connects the city with the SS13 near Sacile.

Several restaurants in the heart of Vittorio Veneto tend to come alive only at night. And mostly on the weekends.

DIRECTIONS: Vittorio Veneto is located off the A27 autostrada north of Venice. It’s about a 45-minute drive from Aviano Air Base using the A28 and A27 autostrade. Add another half hour coming from Vicenza via the A4 and A27. There are scenic routes from both locations that take considerably longer. But you’ll avoid the tolls and can add on a few more stops to your itinerary.

COSTS: The entrance fee for the museum is 3 euros (free for those over 65 or under 18). You must pay to park in spaces highlighted by blue lines or where signs indicate.

FOOD: There are several restaurants to choose from, depending on your tastes. Try some of the mountain cheeses produced in the surrounding areas. Vineyards that produce wine aren’t far away, but Vittorio Veneto isn’t known for its own wines.