'It was the mission of a lifetime' 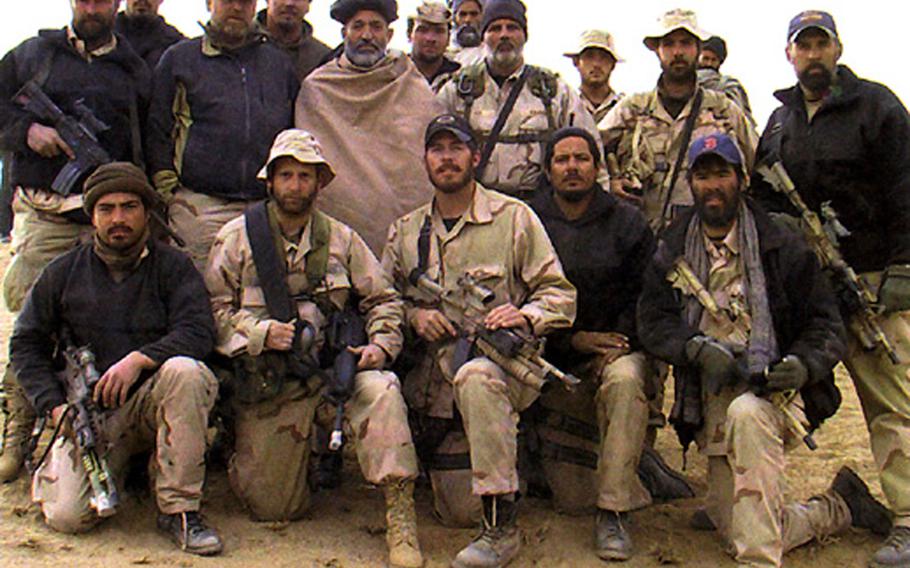 The A-Team with Karzai in November, 2001. Magallanes is in the front row, fourth man from the left. (Courtesy of Gil and Sherry Magallanes)

The A-Team with Karzai in November, 2001. Magallanes is in the front row, fourth man from the left. (Courtesy of Gil and Sherry Magallanes) Sgt. 1st-Class Gil Magallanes, part of the first special-forces team sent into southern Afghanistan, with some Afghan fighters in November, 2001. (Courtesy of Gil and Sherry Magallanes) 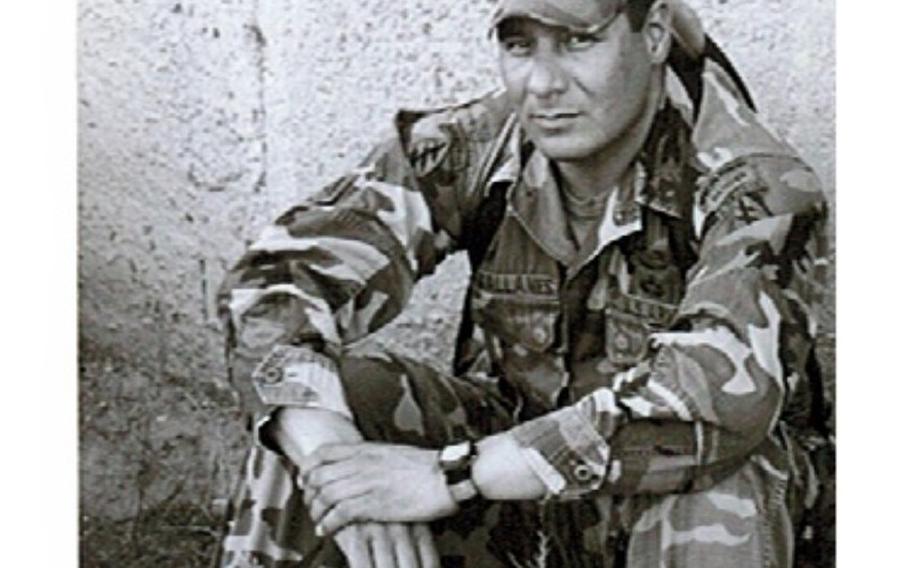 Magallanes on Sept. 11, 2001, in Kazakhstan. (Courtesy of Gil and Sherry Magallanes)

When the Twin Towers fell that September morning nearly a dozen years ago in New York, a group of Army Special Forces soldiers watched in disbelief on Kazakhstan television. They’d been training Kazak paratroops, a mission that suddenly seemed irrelevant.

Weeks later, they were on the mission of a lifetime.

Dropped secretly into Afghanistan, they were ordered to meet with a tribal leader they’d never heard of — one armed with little more than a satellite phone and sneakers provided by the CIA — and help him foment rebellion in the Taliban heartland.

Led by Capt. Jason Amerine, Operational Detachment Alpha 574, from the 5th Special Forces Group out of Fort Campbell, Ky., was the first A-team in southern Afghanistan. These teams typically include 12 men who specialize in a given task but are cross-trained so any man can do another’s job.

Along with a number of CIA paramilitary operatives, the team was to advise and assist the then-obscure professorial leader who was both anti-Taliban and pro-West — unusual for a Pashtun. The group was supposed to create an insurgency from scratch, oust the Taliban and, with it, al-Qaida. The Afghan they were to advise, assist and protect was Hamid Karzai, who later emerged as the country’s interim leader and remains its president.

Sgt. 1st Class Gill Magallanes was third in command of the elite team, the intelligence sergeant who, among other talents, knew how to make bombs out of household ingredients. He was “the strong, silent type, “according to a fellow NCO, “minus the word “silent.’ ”

“Mag,” as he was called, a Gulf War veteran, was the very picture of a Green Beret: symmetrical, 6-foot tall, 215 pounds, most of it muscle. At 38, he’d been married, fathered a boy and a girl, and divorced. When not deployed, he moonlighted as a bouncer.

Magallanes was tasked with finding what little intelligence there was on where the team was headed.

“We were sort of having to figure it out on the fly,” said Amerine, now a lieutenant colonel. “We’d been on the ground 48 hours and had to go to Tarin Kowt to keep people from being slaughtered.”

The Afghans there had driven out their Taliban administrators, and reprisals were expected. The team, along with some 30 Afghan guerrillas with Karzai, formed a ragtag convoy to Tarin Kowt. Hundreds of Taliban fighters from Kandahar were on the way, the Afghans casually informed Amerine over tea.

Hours later, Air Force and Navy aircraft were flying over major routes from Kandahar to Tarin Kowt, and when a large Taliban convoy — as many as 100 vehicles — began to appear in a mountain pass, the bombs started to fly. It ended up as a major U.S. victory.

“The way a special forces team is set up, you’re built to respond to things like this,” Amerine said in an interview some years ago with PBS.

“I had my weapons sergeants analyzing the maps. I had my Air Force combat controller starting to figure out a plan to get a warning order kind of sent up to the Air Force and to the Navy that we’d probably need a lot of aircraft — fast,” Amerine said. “My communications sergeants were calling back right away to our higher headquarters, letting them know what was coming our way.

“JD, the team sergeant, was there orchestrating everything, making sure that everybody was kind of staying on task,” he said. “We worked through the evening that way, waiting for guerrillas to show up. Our plan was to grab as large a force as we could and move out to the edge of town.”

Amerine recounted to PBS: “We were making so much progress in Oruzgan province just by being in Tarin Kowt. For the next few weeks, everybody was surrendering to us. I mean “surrender” in a sense of just giving up loyalty to the Taliban — taking down the flag and raising the Afghani flag.”

As more fighters joined up at the end of November 2001, flooding into Tarin Kowt, Karzai began to worry about their “rowdiness.” The group decided to push farther south toward Kandahar, the final Taliban stronghold.

When they rolled into a town called Shawali Kowt, the Taliban made a stand.

“Mag was running up this hill with our combat controller getting shot at while calling in air support,” Amerine recalled in a phone interview with Stars and Stripes. “The only way to get the guerillas going was to lead from the front and drag them up there. He was one of the strongest leaders on the team, and we’re talking about senior NCOs.”

The next morning, on Dec. 5, 2001, a U.S. Air Force B-52 dropped a 2,000-pound bomb on the team. The controller, it was first thought, had provided the wrong target coordinates. It was later determined that his GPS system had been given a new battery pack, and the controller forgot that GPS reverted to its own coordinates whenever the battery was changed.

Amerine was hit by shrapnel. One sergeant lost an arm. All told, 20 Americans were wounded.

No one who lived was damaged as badly as Magallanes. Three of his fingers were blown off, and he had numerous and severe internal injuries. Worst of all, the blast had cracked open his skull and taken brain matter with it.

Magallanes lay in a coma for a month at Walter Reed Army Medical Center.

His teenage daughter fainted the first time she saw him.

He was in the hospital in January 2002 when Gen. Eric Shinseki, then Army chief of staff, awarded the A team its medals at Fort Campbell, Ky. Two sergeants killed in the explosion received Silver Stars. The others were awarded Bronze Star Medals, some with V devices for valor; Combat Infantry Badges; Combat Medical Badges; and Purple Hearts.

Magallanes was awarded the Bronze Star Medal with “V” for valor, although Amerine had put him in for a Silver Star.

The man who was likely the first American to suffer traumatic brain injury in the Afghanistan and Iraq wars, Magallanes has spent years in and out of hospitals and rehabilitation centers. He’s undergone repeated surgeries and therapies that have helped but have been unable to restore him to the man he was.

“The worst thing? I would probably say being slow with my brain,” Magallanes said. “I just don’t do what I used to do. It’s a 50-50 chance if I put my shirt on right.”

Sherry and Gil Magallanes were married in 2003, a couple of years after he awoke from his coma and called her on the phone.

“He woke up. He dialed my number,” she said. “It made me feel really good. I knew he’d never be the same. But I loved him.”

Before his injury, Magallanes was “a hardass,” his wife said. “He could be a jerk.”

“I’d never seen him cry before. It’s nice,” Sherry said. “He’s different but it’s not all bad. He’s here with me. He’s not going to be hurt.”

Magallanes has a harder time seeing any silver lining.

“I grew old and retired overnight,” he said. “I’ve got plenty of things to be angry about. I’ve got a laundry list.

“I feel like I went from being a pitbull to a chihuahua.”

Losing his career has remained very difficult for Magallanes, his wife said. In the past decade, he’s battled depression and bitterness that he lost so much because of a mistake, one by the U.S. military.

The medically retired master sergeant spends his days now in Clarksville, Tenn., with his wife, visiting doctors and therapists, doing brain exercises and training for the wounded warrior events he loves.

He swims with a tether and rides a stationary bike, has competed in triathlons and has ridden 620 miles for charity pedaling from the backseat of a tandem bike.

Magallanes knows that Amerine has continued working to get his medal, along with those of two other sergeants, upgraded to a Silver Star.

“All I care about is when I look my team members in the eye, that I don’t have to put my head down,” Magallanes said. “I can honestly say I didn’t let anybody down.”

He remembers everything about the monthlong mission before the bomb hit.

“As Green Berets, it was everything we trained for,” he said. “You can’t help but feel you were a part of history. It was the mission of a lifetime.”