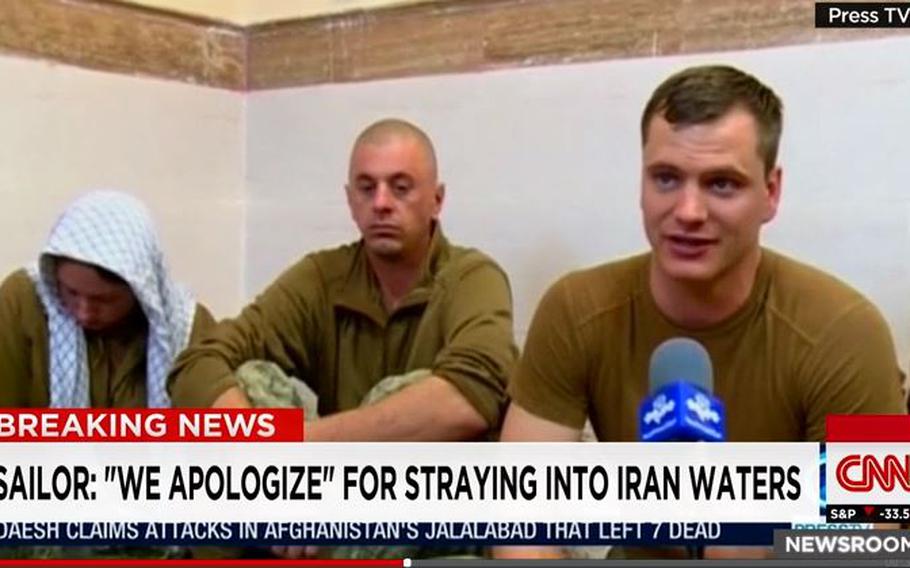 A screen grab of a video where a US sailor apologizes. (Screen grab)

Ten U.S. sailors and two U.S. riverine command boats – small shallow-water patrol craft with minimal technology or defenses – were detained Tuesday after a mechanical failure caused the boats to drift into Iran’s territorial waters near Farsi Island, U.S. defense officials said. There were nine male sailors and one female sailor on board.

After Iran impounded their vessels, the video shows the crews being taken to what looks to be a closed-off room with white walls and rugs. The crew removed their shirts and shoes; it was not clear if the Iranians required them to do so. The male sailors are wearing olive T-shirts, and the female sailor is wearing a long-sleeve shirt and a head covering.

In a statement on the sailors’ release, the Iranian Revolutionary Guard Corps said the United States apologized for the incident. However, John Kirby, a State Department spokesman, said reports of an official U.S. apology were false.

In the video, the sailors do not appear to be in distress, and images show them being fed and offered bottles of water. The sailor identified as the commander appears calm, almost familiar with his Iranian counterparts.

Even though the crews would not have known each other personally -- U.S. and Iranian militaries do not conduct joint exercises -- the proximity of ships sailing the Gulf creates an atmosphere of familiarity, said retired Navy Cmdr. Chris Harmer, a senior naval analyst with the Institute for the Study of War. “You’ve got this neighbor – you know where he is, and maybe they are very familiar with each other.”

Harmer, a former Navy helicopter pilot, deployed many times to the Persian Gulf and was assigned to U.S. aircraft carriers, destroyers and cruisers there during his 20-year military career.

His deployments taught him that the distance between the two nations does not exist during the everyday life of the sailors and naval aviators who patrol the narrow Persian Gulf and Strait of Hormuz on a daily basis. On his first deployment, Harmer said he was “astonished how much communication I personally engaged in” with his Iranian counterparts, and how much daily chatter went on between U.S. and Iranian ships, shore installations and aircraft during his eight deployments to the Persian Gulf between 1995 and 2009.

But it doesn’t explain the apology, he said.

Each member of the U.S. armed forces swears to its Code of Conduct. One of its tenets states, “When questioned, should I become a prisoner of war, I am required to give name, rank, service number and date of birth. I will evade answering further questions to the utmost of my ability. I will make no oral or written statements disloyal to my country and its allies or harmful to their cause.”

Because Iran and the U.S. are not at war, it was not clear whether the sailor’s apology was a Code of Conduct violation. A defense official told Stars and Stripes that the apology was something that “was being looked into,” but could not elaborate.

“Whether we are war or not,” Harmer said, “The Code of Conduct is a very good guide on how to act. A U.S. enlisted sailor should not be offering an apology to the Iranian navy – it’s not his place.”

The release of the detained sailors comes just days before the International Atomic Energy Agency is expected to verify that Iran has fulfilled the terms of last year’s nuclear deal with the United States, which lifts sanctions worth billions on Iran’s financial, shipbuilding, software, automobile and oil industries. In exchange, Iran must cease its development of enriched uranium, used to make nuclear weapons, and sharply curtail other aspects of its nuclear research.