The National Museum of Emerging Science and Innovation, also known as Miraikan, in Tokyo, offers an engaging experience for visitors all ages. (Hana Kusumoto/Stars and Stripes)

The National Museum of Emerging Science and Innovation, also known as Miraikan, in Tokyo, offers an engaging experience for visitors all ages. (Hana Kusumoto/Stars and Stripes) 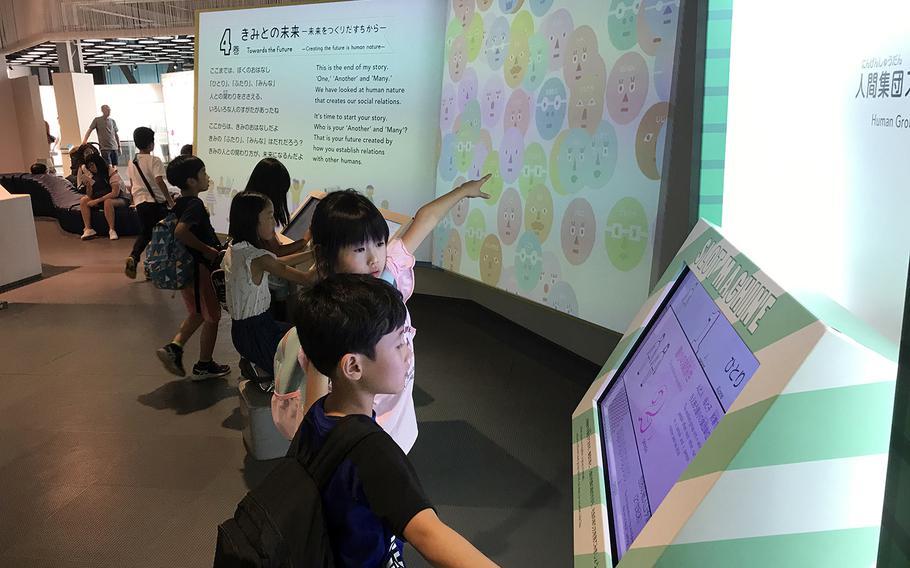 Many exhibits the Miraikan museum in Tokyo are interactive and engaging for visitors. (Hana Kusumoto/Stars and Stripes) 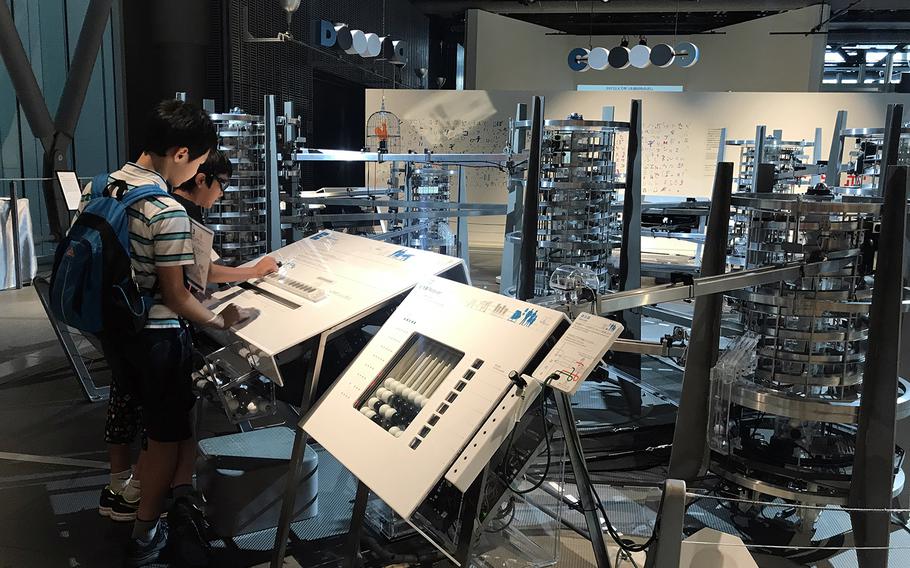 Children check out an interactive exhibit at the National Museum of Emerging Science and Innovation, also known as Miraikan, in Tokyo. (Hana Kusumoto/Stars and Stripes) 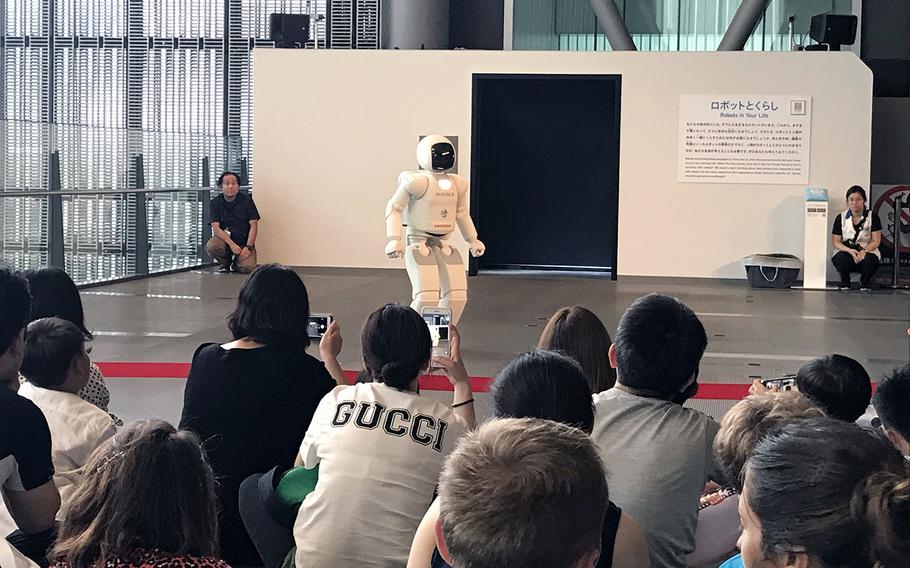 A humanoid robot named ASIMO kicks a ball and dances during presentations held four times a day at the National Museum of Emerging Science and Innovation, also known as the Miraikan, in Tokyo. (Hana Kusumoto/Stars and Stripes) Visitors can speak with an adult android named Otonaroid at the National Museum of Emerging Science and Innovation, also known as the Miraikan, museum in Tokyo. (Hana Kusumoto/Stars and Stripes) 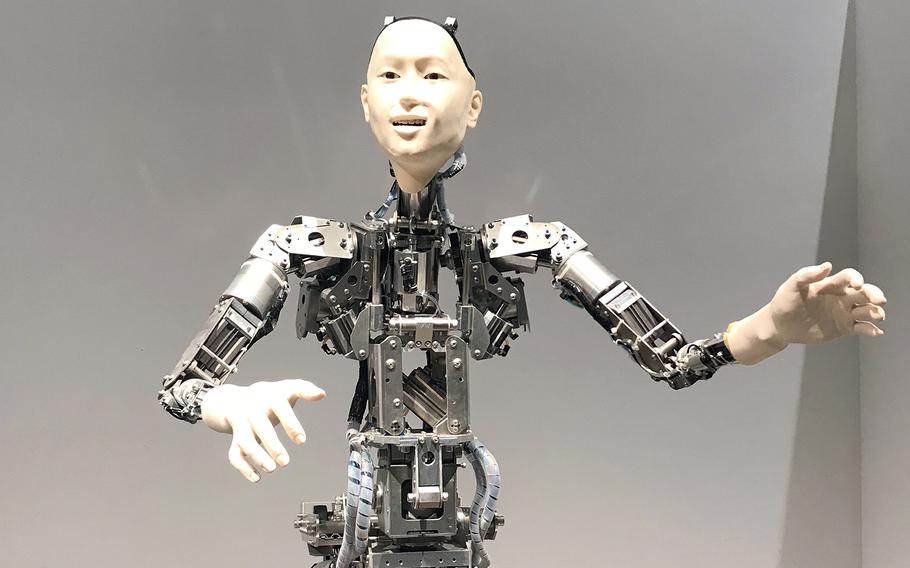 The National Museum of Emerging Science and Innovation, more commonly known as Miraikan, showcases Japan’s leading studies in science and technology. The museum offers an interactive, hands-on learning experience enjoyable for visitors of all ages.

Some displays, such as those on neutrino and elementary particles, sound intimidating, but the hands-on exhibits are fun and engaging, which makes visitors forget that they are looking at science exhibits.

Visitors are welcomed by a large hanging globe when they enter Miraikan’s second and third floors, where the permanent exhibits are displayed.

The Geo-Cosmos, which the museum refers to as a symbol of Miraikan, is covered with thousands of organic light-emitting diode panels. Organic LEDs are lighter and more energy efficient than regular LEDs.

The display shows the Earth in a 10-megapixel rendition as seen from space, using fresh satellite data. It also displays other data such as ozone concentration, surface temperature and Pacific bluefin tuna migration.

Next to the Geo-Cosmos are several touchscreen panels that show various climate challenges the Earth is facing. The topic may be difficult to understand, but children enjoyed touching the screen and watching the displays changing and showing different data.

Among the major attractions at the museum are robot and android demonstrations. Every couple of hours, a Honda humanoid robot, ASIMO, explains to visitors what it can do. It dances and sings as well as runs and kicks a soccer ball while the crowd cheers.

There are also two android robots displayed at the museum. One is Otonaroid, a female android.

Otonaroid talks with visitors during several daily demonstrations. Just like humans, she blinks repeatedly when a visitor asks a question that she doesn’t know the answer to or looks up in the air when thinking of what to say.

Another android called Alter has a human face but just a torso. Unlike many androids, it is not covered by silicon skin, so visitors can get a close look at the structure and mechanism underneath, which reproduces the delicate movements of human arms and hands.

Another highlight of the museum is the dome-shaped 3D theater, which looks like a planetarium. To watch the show, visitors need to make a reservation and pay for a separate ticket.

One of the two shows available when we visited was about the mechanics of space and birth of the Earth. It had beautiful and soothing music with images of stars covering the entire dome using a special projector that can show 10 million stars.

There are many other engaging displays at the museum, most of which have English translation and descriptions. There is also a replica of the International Space Station, which visitors can walk inside and see the environment in which the astronauts work and live 250 miles above the earth.

There was also a hands-on model of the World Wide Web. Using a pinball machine, the model shows how information is transmitted over the internet. It was a learning experience, but also fun to follow the balls rolling and spinning through the machine.

The museum also offers guided tours on the weekend aboard UNI-CUB self-balancing personal transporters, a kind of seat on wheels. The tour is 45 minutes for 1,200 yen. If you don’t have time, you can just try it out for 600 yen.

There is plenty to eat at the museum cafe and restaurant. The restaurant offers items such as pasta and beef bowls, which were surprisingly good.

It also served a special menu when we visited that included rice with white curry sauce and mammoth Mont Blanc cake, which was based on the theme from the temporary, special exhibit on mammoths, the elephant-like creatures of prehistory.

The cafe serves mainly light snacks such as hot dogs and tartines, or open-faced sandwiches. It even serves color-changing herb tea — two types of herbal tea that change color when mixed together — a fitting drink to enjoy while contemplating all of the science you’ve just learned about and experienced.

DIRECTIONS: The museum is located a 4-minute walk from the Yurikamome line’s Telecom Center Station and about 5 minutes from the Tokyo International Cruise Terminal Station.

It is about 15 minutes from Tokyo Teleport Station on Tokyo Waterfront Area Rapid Transit’s Rinkai line.