Instead of Tokyo, hop a train to Kawagoe to experience a mix of historic, contemporary 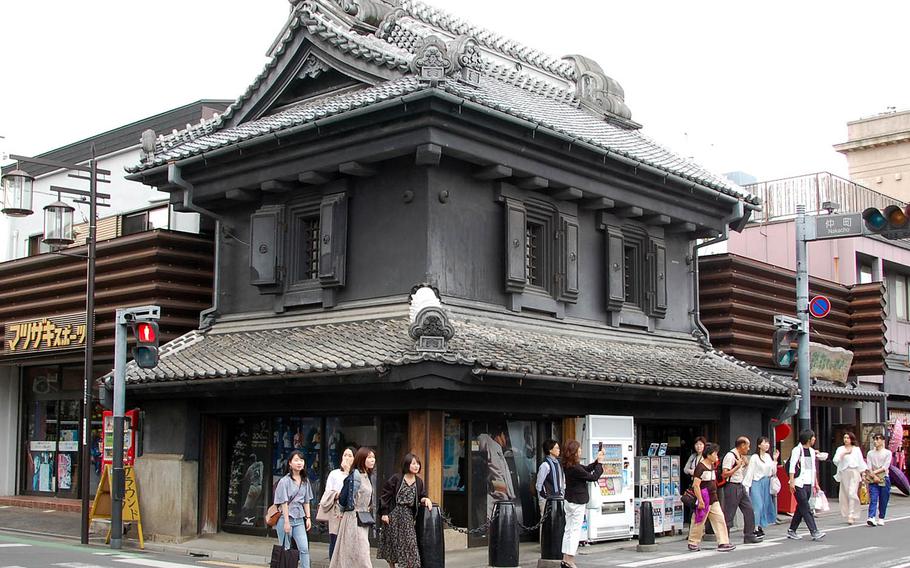 Warehouses built of clay during the Edo Period are repurposed into contemporary retail space in Kawagoe's Kurazukuri, or warehouse district, as seen here May 18, 2019. (Joseph Ditzler/Stars and Stripes)

Warehouses built of clay during the Edo Period are repurposed into contemporary retail space in Kawagoe's Kurazukuri, or warehouse district, as seen here May 18, 2019. (Joseph Ditzler/Stars and Stripes) 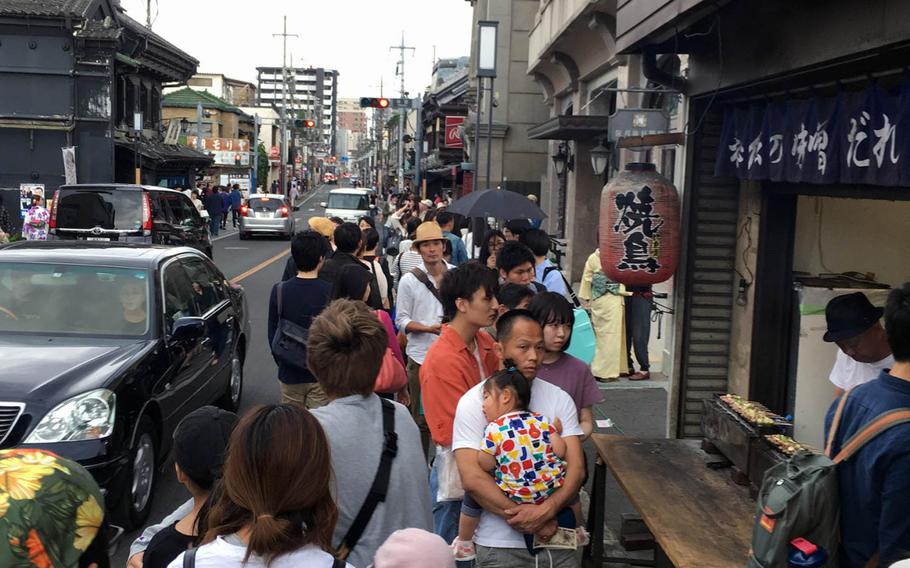 A line forms in Kurazukuri district of Kawagoe, Japan, for streetside yakitori, grilled chicken on skewers, on May 18, 2019. (Joseph Ditzler/Stars and Stripes) 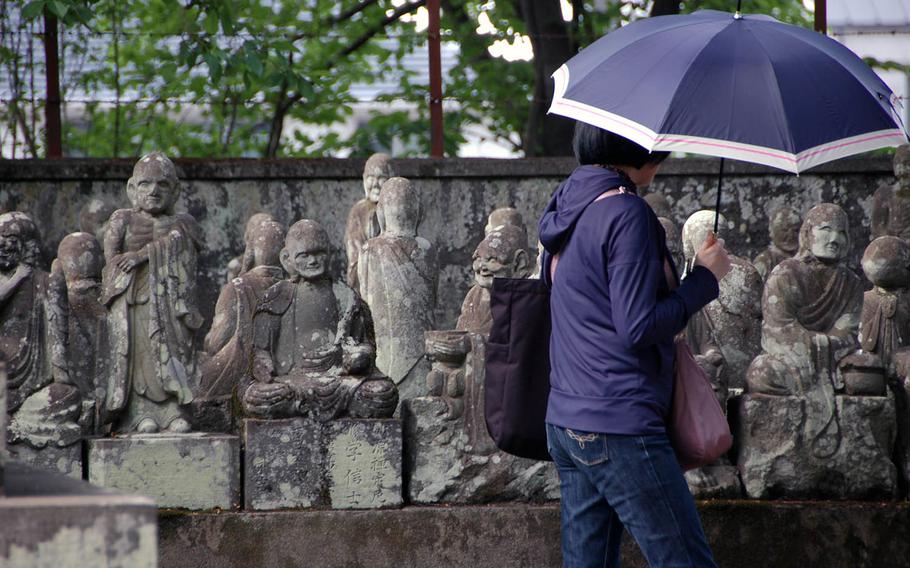 A visitor moves through a garden of 540 stone statues of Buddha's disciples at the Kitain temple in Kawagoe, Japan, on May 18, 2019. (Joseph Ditzler/Stars and Stripes) 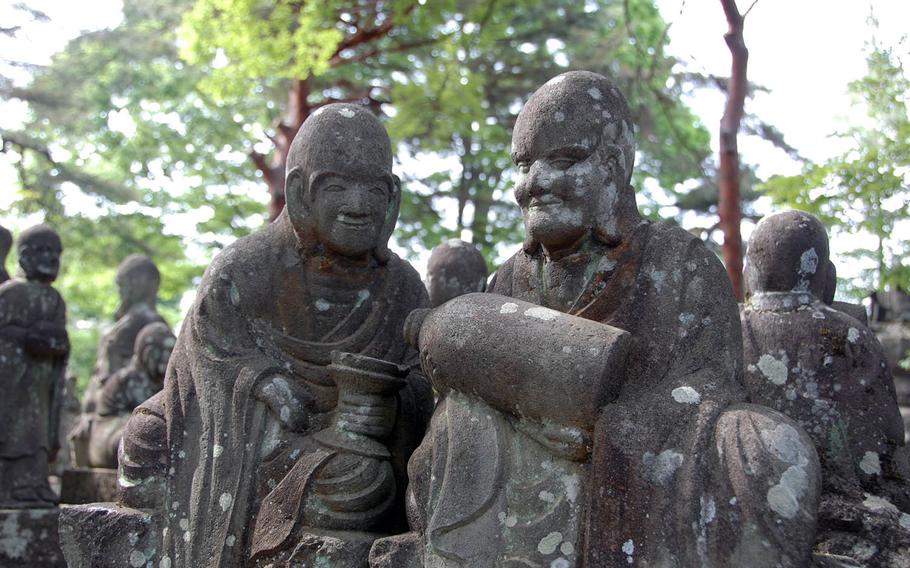 Two disciples of Buddha share a jug in the 500 Rakan compound at Kitain temple, Kawagoe, Japan, on May 18, 2019. (Joseph Ditzler/Stars and Stripes) 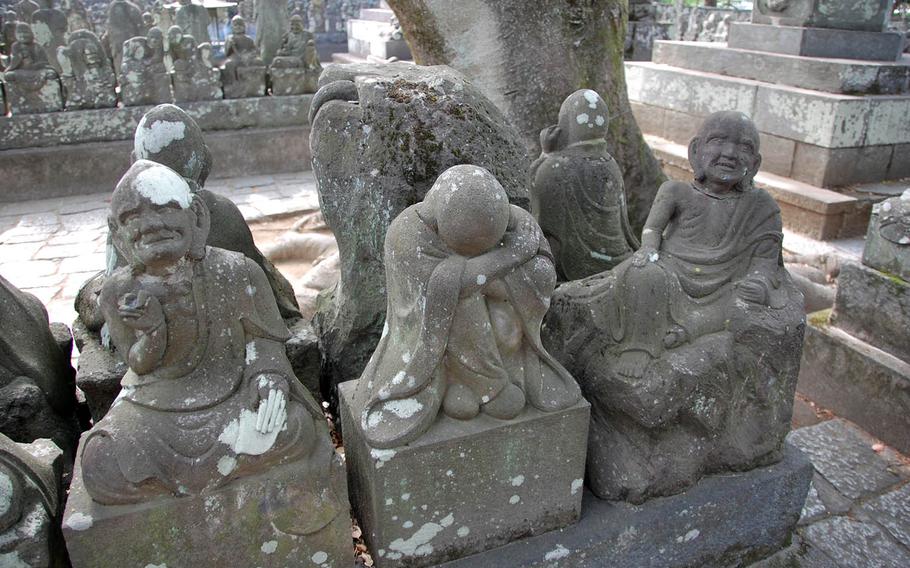 One rakan face among 540 remains unseen at the Kitain temple in Kawagoe, Japan, on May 18, 2019. (Joseph Ditzler/Stars and Stripes)

An excursion by rail to Kawagoe in Saitama prefecture opens a window to a bygone era in Japan.

Sometimes called “Little Edo,” a reference to Tokyo’s former identity, the city encompasses a busy commercial district and a Buddhist temple of historic and cultural significance. If, like me, you’re relatively new to Japan, Kawagoe is a nice weekend-day-trip alternative to the bustle of center city Tokyo.

Kawagoe is about an hour’s drive from Yokota Air Base and an hour and 15 minutes by train from Higashi-Fussa Station, the closest to the base, via the Hachiko line. The rail line crosses a diverse landscape, including the air base and the familiar, tight architecture of suburban Tokyo, but also past rice paddies, through a forest and over a bridge across the wide Iruma River bed.

The Hachiko line drops passengers at the Kawagoe Station, the busiest of three stations in the city. The others are Hon Kawagoe and Kawagoe-shi. Check your favorite trip planner (Google Maps works for me) to find the best route and times.

The luxury of an uncontested seat coming and going is a relief from strap-hanging into the city center. The train also serves up a chance to catch snapshots of Japanese life.

Take, for example, the Japanese teenage couple seated cattycorner from me, her in an ankle-length skirt, white blouse and brown sweater and him in an unrestrained growth of black hair and oversized pants and shirt. He nodded off mid-selfie as she moved a strand of hair falling across his face.

The ride home repeats the inbound trip, the rail car shared with a trio of sharply dressed, petite older women chatting past eight stops, and uniformed school children, bearing backpacks larger than themselves.

An out-and-back trip on Saturday afternoon cost me 1,166 yen (about $10.60), and I logged six miles walking a circuit from Kawagoe Station to Kitain temple, then to the Kurazukuri district and back to the station.

From the station through a mostly residential district with some restaurants and shops to the temple takes about 20 minutes. The Kitain temple, affiliated with the Buddhist Tendai sect, is a lot like other Buddhist temples and this one, too, has a unique history. The first temple was built on the site in the year 830. It burned down in 1205 and was rebuilt 93 years later.

Once more, in 1638, fire destroyed the Kitain. At the time, the Tokugawa shogun Iemitsu ordered it rebuilt and sent several buildings from Edo Castle, now the site of the Imperial Palace in Tokyo, to Kawagoe as part of the project. Iemitsu’s fortuitous act preserved a piece of Edo; the Kitain buildings are all that remain of the old castle, lost to the 1923 earthquake and World War II.

During a brief meditative pause on the narrow porch over the temple garden, a polite Japanese woman offered, in perfect English, how the arrangement of large rocks elicits the image of mountains, and the gravel around them a high-country river.

One of the most distinctive part of the grounds is the Gohyaku Rakan, or 500 Rakan (it’s actually 540) stone statues of disciples of Buddha, lined up in rows inside a walled compound.

Carved between 1782 and 1825, each face is unlike the others, some irreverently so. One figure appears to be picking his nose, two others share a jug of something that inspires an anticipatory grin and a third buries his head in his arms. Is it humility, exhaustion or world weariness?

Legend has it that one should visit the installation at night, moving from one statue to another by touch until discovering a warm stone figure. Return in daylight to the same statue and you’ll find it’s the one that most resembles you.

Admission to the temple, 400 yen, includes the 540 rakan. A shop sells drinks, snacks and souvenirs. From there, it’s another easy 20-minute walk to the Kurazukuri, basically the main street. The buildings that line the street, originally intended as warehouses, are its prominent feature.

In the Edo Period, 1603-1868, Kawagoe merchants grew wealthy on their trade and connections with the nearby capital city, hence “Little Edo,” the story goes. Prosperity allowed business owners to build their warehouses not of wood but of more durable clay.

Today the warehouses are home to an assortment of trendy shops, many capitalizing on the tourist trade but others selling food, clothing and housewares.

The weekend bustle on the street includes tourists, families and young people, some in kimonos, generally enjoying a day off. Likewise, Kawagoe Station is a busy place, with a selection of restaurants and shops inside, including a Starbucks and the custard-filled cream puff franchise Beard Papa.

FOOD: Dining options abound along the Kurazukuri, including the street’s long continuation back to Kawagoe Station. From sushi to soba to coffee to izikayas, a broad selection unfolds, including several eateries inside the train station.

INFORMATION: For more information about Kawagoe, including driving directions, Candy Street and the Naritasan temple antique sale the 28th of each month, visit yokotatravel.com, tokyocreative.com or Japan-Guide.com.