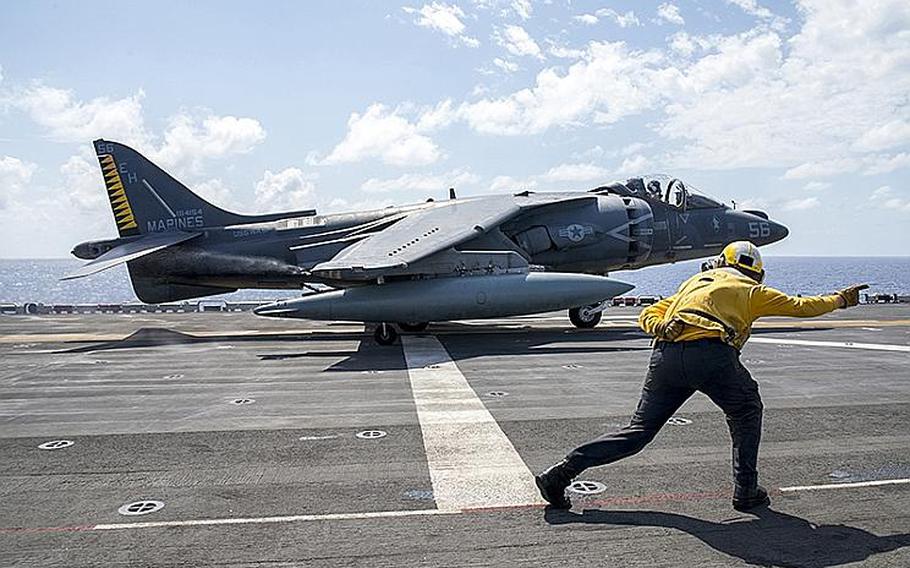 An AV-8B Harrier, from the 22nd Marine Expeditionary Unit, takes off from the flight deck of the amphibious assault ship USS Wasp in the Mediterranean Sea on Wednesday, Aug. 24, 2016. The 22nd MEU, embarked on the Wasp, was conducting precision air strikes in support of the Libyan Government of National Accord-aligned forces against Islamic State group targets in Sirte, Libya, as part of Operation Odyssey Lightning. (Michael Molina/U.S. Navy)

An AV-8B Harrier, from the 22nd Marine Expeditionary Unit, takes off from the flight deck of the amphibious assault ship USS Wasp in the Mediterranean Sea on Wednesday, Aug. 24, 2016. The 22nd MEU, embarked on the Wasp, was conducting precision air strikes in support of the Libyan Government of National Accord-aligned forces against Islamic State group targets in Sirte, Libya, as part of Operation Odyssey Lightning. (Michael Molina/U.S. Navy) 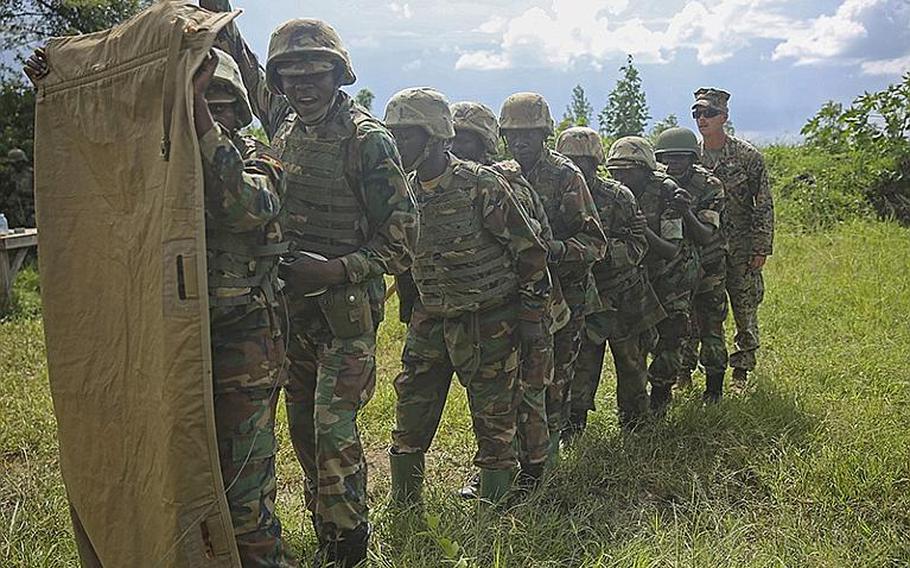 A Uganda People's Defense Force soldier, second from left, acts as breacher and pulls the safety off an igniter as instructed by U.S. Marine Sgt. Sam Adkins, right, an explosive ordnance disposal technician with Special-Purpose Marine Air-Ground Task Force Crisis Response-Africa, during a practice breaching drill at Camp Singo, Uganda, on Nov. 24, 2015. The Marines and UPDF improved breaching capabilities as they prepare for their African Union Mission in Somalia. The U.S. military has taken action in Africa to help local forces fight against insurgents. (Olivia McDonald/U.S. Marine Corp)

In Europe, a resurgent Russia, wary allies and a military mission to be defined Army mission in Europe grows, but for how long? STUTTGART, Germany — Africa often is an overlooked U.S. military mission, with small numbers of American special operations forces on the continent, quietly hunting obscure warlords in some of the world’s most remote territory.

In recent months, the rise of the Islamic State group in northern Africa, particularly Libya, has thrust the U.S. military into action, conducting its first major combat effort on the continent since helping to topple Libyan strongman Moammar Gadhafi in 2011.

Today, U.S. bombers routinely pound Islamic State group targets in Libya. Special operations forces are on the ground in Somalia, assisting local forces in their fight against insurgents in that war-torn country. In western Africa, American drones monitor the territory in Mali and northern Nigeria while U.S. troops are a steady presence in the region, training indigenous militaries leading the fight against the deadly group known as Boko Haram.

President Barack Obama’s administration, in recognition of the growing concern about the Islamic State group and other extremists, earlier this year earmarked $200 million to help combat terrorism in northern Africa.

A question going forward for the next commander in chief will be whether there is much room for anything else in Africa.

The nearly 5-year-old U.S. effort to capture Joseph Kony and his small band of roving fighters in the Lord’s Resistance Army was for a brief time a global social media sensation. It also was touted by members of Congress who had urged the White House to take action against the bandit group.

Now, a resource-strapped Pentagon is facing more pressing threats in Africa’s north. The next commander in chief must determine whether to keep spending resources on missions such as the LRA campaign that fall outside the scope of combating terrorism.

The resources of U.S. Africa Command “are overwhelmingly committed to current challenges – Libya, Somalia, Nigeria and its neighbors, the Sahel – leaving very little bandwidth for thinking about, much less shifting to, the emerging challenges of the continent,” said J. Peter Pham, director of the Atlantic Council think tank’s Africa program.

With a fast-growing population, rapid urbanization and “uneven economic dynamism,” security challenges across the continent shouldn’t be underestimated, Pham said.

In Africa, the population is expected to more than double to 2.8 billion people in 50 years, with most of that growth happening in cities.

Eager for raw materials, such as rare earth minerals, China has emerged as a key economic and political player in Africa. In a signal of Africa’s growing strategic standing, China in 2017 is expected to move into a new logistics hub in the tiny, strategic eastern African nation of Djibouti, which also hosts the United States’ only permanent base on the continent and a key platform for combating terrorism out of Somalia.

“It’s no accident that China’s first-ever permanent overseas military installation is on African soil,” Pham said. “This is the continent of tomorrow, and America’s strategic posture needs to reflect it.”

The United States has about 4,000 military personnel stationed at Camp Lemonnier in Djibouti. Overall, the number of U.S. troops in Africa is in a state of constant flux, where forces regularly rotate in and out for various missions. At any given time, about 7,000 American troops are scattered across Africa, a continent three times the size of the continental United States.

But for the United States, concerns about the Islamic State group in Iraq, Syria and, more recently, in parts of Africa, along with larger interests in the Pacific region and fresh security concerns in Europe, means American troops on the continent will struggle for resources.

“[Africa Command] kind of gets lost in all of that,” said Lawrence Korb, a former assistant secretary of defense for manpower. “To start with, it’s never been a command that had a lot of units really assigned to it in a permanent way.”

With limited resources, the focus is firmly on immediate threats.

In the case of the counter-LRA mission, a campaign that has involved up to 100 special operations advisers and surveillance aircraft, the effort costs the United States about $100 million yearly.

Gen. David Rodriguez, the former chief of Africa Command, shortly before retiring this summer questioned whether that was the best use of limited resources given the other pressing challenges.

Pham said it is time to examine the mission, but he also cautioned the next administration shouldn’t limit its military strategy to counterterrorism matters.

“Given the sheer number of challenges in Africa and the degraded nature of the threat that Joseph Kony and his dwindling band pose to our African partners, much less to the United States, it is time to re-examine whether this deployment is really the best use of these scarce resources America currently expends on it,” Pham said.