Hunt Brothers Pizza and Da Peppino will both satisfy your hunger, but one is clearly better 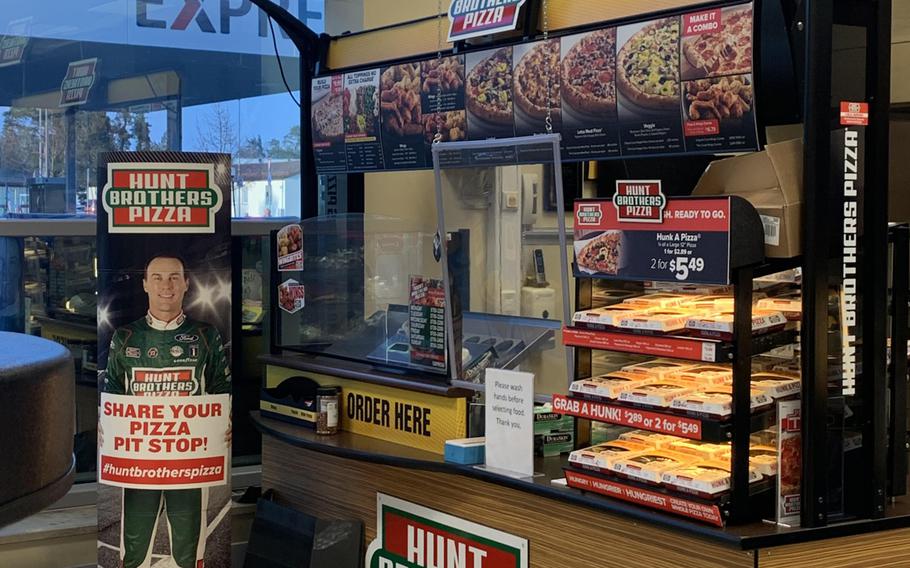 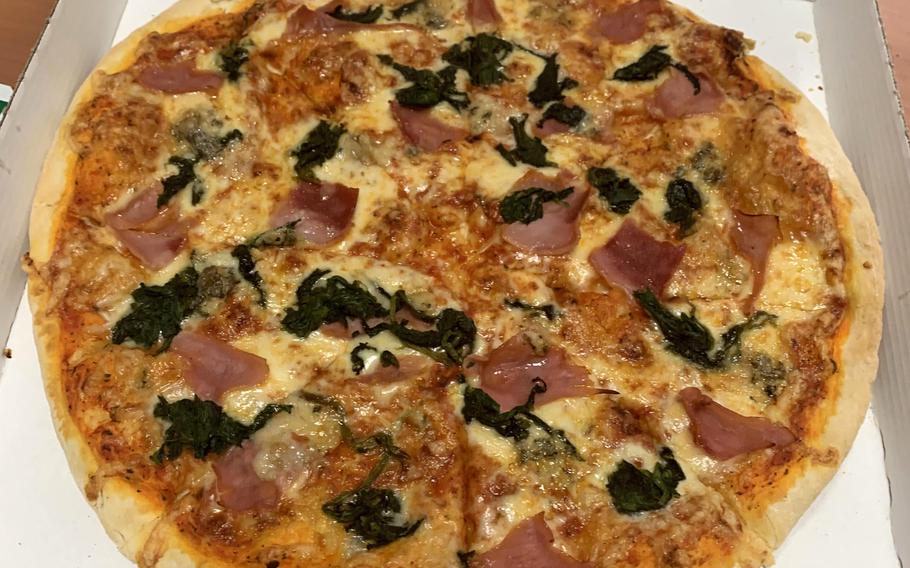 Buy Photo
Da Peppino's medium pizza, featuring spinach and ham. The flavor and presentation made it a satisfying meal from the restaurant, which has been operating in Grafenwoehr, Germany since 2009. (Immanuel Johnson/Stars and Stripes) 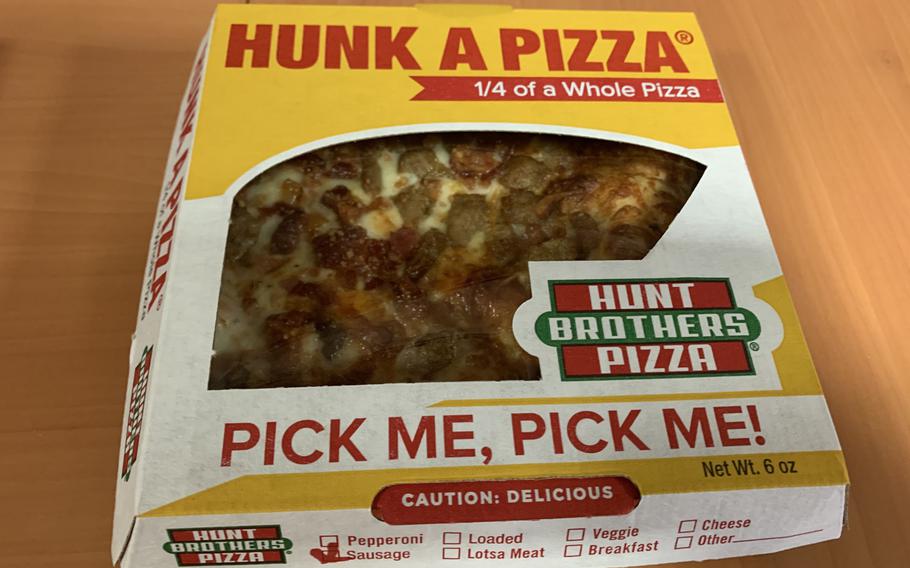 Buy Photo
The "Hunk a Pizza" at Hunt Brothers in Grafenwoehr, with with sausage and bacon. (Immanuel Johnson/Stars and Stripes) 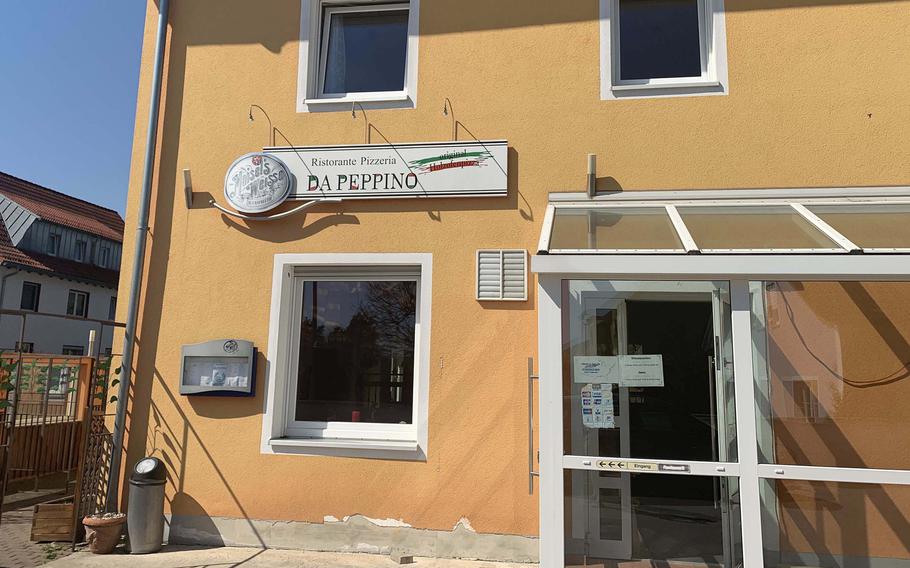 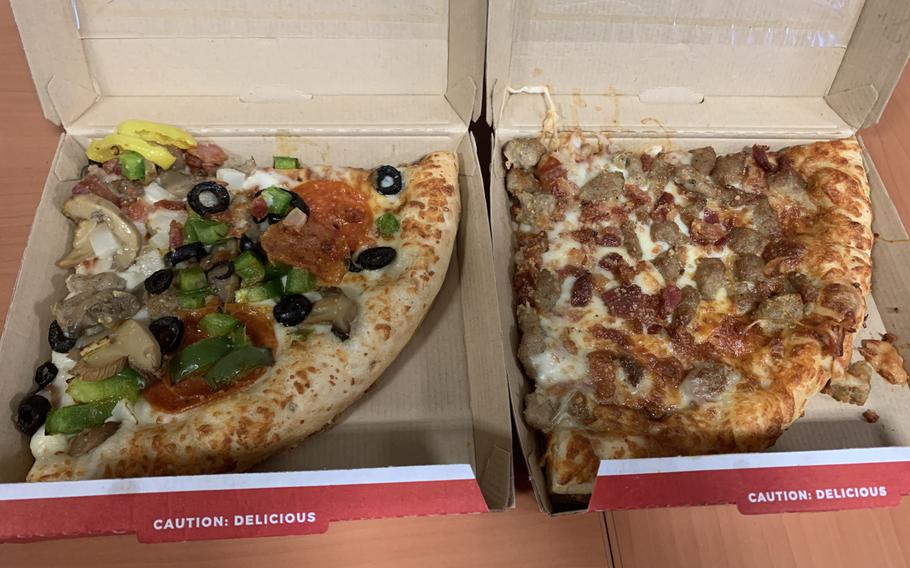 Buy Photo
The sausage and the loaded slices, which were compared with Da Peppino's pizza in Grafenwoehr, Germany. (Immanuel Johnson/Stars and Stripes)

The takeout choices are limited right now for the thousands of soldiers and others at the Grafenwoehr Training Area in Bavaria, even for a pizza.

For those restricted to Grafenwoehr, the simple choice is Hunt Brothers, an addition over the past year to several bases in Germany. Off post, there’s Restaurante Da Peppino, a local mainstay since 2009.

Hunt Brothers pizza has convenience going for it — it’s in the shoppette, it’s open most of the day and there’s a respectable variety. If you’re not that hungry, they sell slices, as well as “hunks” that equal 2-3 slices.

Da Peppino has only 13-inch and 16-inch offerings, but they’re also a full-service restaurant with pasta, salmon, schnitzel and most of the regular dishes you’re likely to find at an Italian spot in Germany. But in this case, I stuck to pizza for the sake of comparison.

At Hunt Brothers, I tried a slice of the sausage and bacon, and another of the “loaded” pizza, which had pepperoni, green peppers, black olives, banana peppers, onions, mushrooms, cheese and ham. At Peppino, I went for a ham and spinach pizza.

Was it a fair contest between Peppino’s wood-fired oven pizza and Hunt Brothers’ pizza that had been sitting under a lamp? Probably not, but hey, I was hungry.

The Peppino pizza’s flavors all came through, with a good balance between the toppings, cheese, tomato and bread. The loaded Hunt Brothers slice was just too much grease. The sausage and bacon pizza didn’t have its toppings falling off and was the better of the Hunt Brothers options.

The winner on taste and presentation? Da Peppino. If you’re short on cash or hungry at odd hours, Hunt Brothers satisfies a craving, and they do make made-to-order pizzas as well.

Da Peppino also offers either a free soft drink or bottle of wine for orders over 35 euros, according to their takeout menu.

Prices: Between 7 and 18 euros