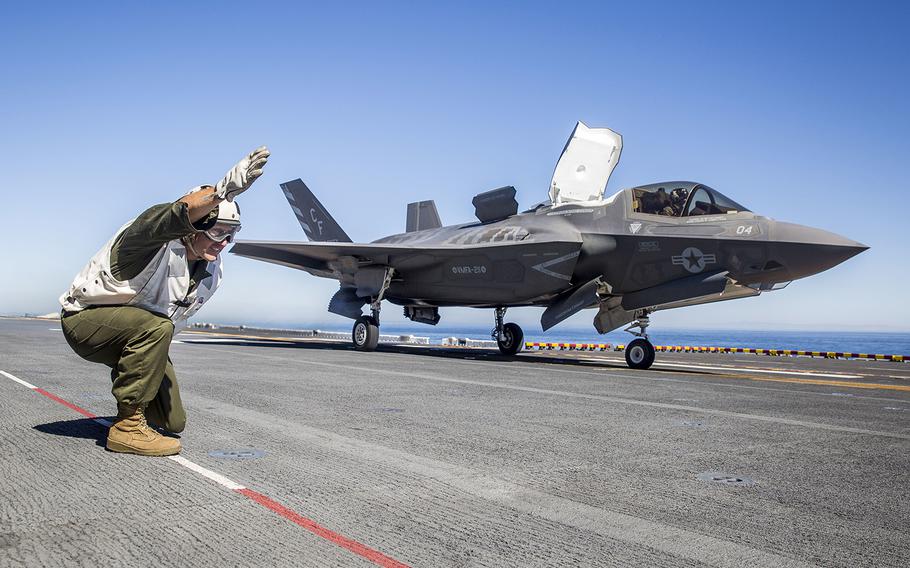 WASHINGTON – Several House panels on Thursday issued their first wave of proposals for the next defense policy plan with aims to boost military pay and benefits, troop levels, innovation efforts, weapons and equipment.

The proposals, approved before several House Armed Services Committee subpanels, include the highest military pay raise in nearly a decade, a boost to end-strength across all the services, an extension to special pay and bonuses for servicemembers and new ships, planes and other acquisitions.

The effort appears to build on new momentum to grow the size and might of the military in response to China and Russia’s growing capabilities as laid out in President Donald Trump’s budget request for the Pentagon issued earlier this year.

For example, provisions of the House budget proposals “provide our war fighters, military families and retirees the care and support they need, deserve and have earned,” Rep. Mike Coffman, R-Colo., chairman of the House Armed Services Committee subpanel on military personnel issues, said Thursday in a hearing.

In recent weeks, the House Armed Services Committee, its subpanels and its Senate counterparts have held dozens of hearings to discuss the 2019 budget priorities for each of the branches as well as a wide-ranging list of challenges facing the military. The hearings play into the development of the 2019 National Defense Authorization Act, or NDAA, which directs policy and spending plans for the Defense Department.

The proposals follow Trump’s February rollout of the Pentagon’s proposed 2019 budget, which asked for a hike in funding to $686.1 billion. Some experts said the effort was likely to get a positive response on Capitol Hill, especially with a deal already in place to bust statutory spending limits and Congress invested in military improvements during an election year.

“We are not yet out of the woods,” Sen. Jim Inhofe, R-Okla., acting chairman of the Senate Armed Services Committee, said Thursday during a Pentagon budget hearing. “We cannot dig ourselves out of the current readiness crisis in just two years. It will take much longer to undo the damage that has been done the past eight years to our military.”

The Pentagon’s request for fiscal year 2019, which begins Oct. 1, sought an increase of more than 15,000 active-duty troops and investment in key modernization programs. Thursday’s proposals showed House lawmakers are on board with that plan, so far.

While final figures proposed under the House plan remain to be seen, there is already a push to go beyond the Pentagon’s request in some cases.

For example, the House Armed Services Committee subpanel on seapower and projection forces is weighing the purchase of three additional battle force ships, including one Ford-class aircraft carrier and two additional Littoral Combat Ships – up from the one requested by the Pentagon.

The panel, in its earliest proposal so far, also known as its “mark,” is also seeking a more aggressive schedule for the purchase of Virginia-class submarines, full funding for the B-21 Raider bomber program, among other efforts, said Rep. Rob Wittman, R-Va., chairman of the House Armed Services Committee subpanel on seapower and projection forces.

"As Russia and China grow their naval presence, it is absolutely critical that we continue to invest in and rebuild our Navy,” Wittman said. “To achieve distributed lethality, we must provide the Navy, Marine Corps, and Air Force the tools and resources they need to deter our adversaries, support our allies, and respond to threats around the globe, I believe this mark does that.”

The budget plans would also ignite the Pentagon’s rebuild of its nuclear infrastructure and give troops a 2.6 percent pay hike, the largest in 9 years.

This week’s effort sets the tone for a long debate ahead, marking the earliest stages of an arduous process for Congress to reach a deal on the NDAA.

The full House Armed Services Committee is expected to vote on its proposed defense policy plan, H.R. 5515, as early as May 9. Its Senate counterpart is expected to start its mark-up process in late May.

Once those key committees push out their proposals, it’s up to the full chambers to proceed on the plan before reaching a deal that could be sent to the president’s desk for his signature.

The process is moving faster this year, and in a more orderly fashion, than compared to 2017. Last year, committees weren’t undertaking the mark-up processes until June.

“Fortunately, we find ourselves in a moment of budget stability, having passed an agreement in February that removed the threat of (statutory budget cuts) for fiscal years 2018 and 2019,” said Sen. Jack Reed, D-R.I., the ranking Democrat for the Senate Armed Services Committee. “However, additional challenges loom on the horizon.”

Among its proposals, the House military personnel subpanel said it is considering a plan to give the services a new recruiting edge against the private sector by expanding its constructive service credit program, which determines rank and grade, to count time for advanced education, experience and training. It is also considering making permanent the Career Intermission Program, which allows servicemembers to take a break from active service to pursue personal interests, family needs, education or career opportunities.

It is also considering an effort to enhance ongoing reforms of the Military Health System and require the defense secretary’s review of the Defense Health Agency’s ability to deliver mental health care services as well as research efforts relating to brain injuries and post-traumatic stress disorder.

Also among the proposals: an overhaul of the Transition Assistance Program that provides assistance to servicemembers entering civilian life.

The House budget proposal “improves transition assistance for servicemembers and their families and continues our commitment to taking care of military families,” Speier said.

The plan would also would require the Defense Department to establish a centralized oversight plan to ensure criminal data for servicemembers is reported to the FBI. The effort comes in light of a Texas church shooting involving a former Air Force servicemember. Had his criminal record been reported by military officials, it might have averted his purchase of weapons.

It would also require portions of reports documenting misconduct by senior leadership to be made public.

The proposal “increases transparency from the Department of Defense,” Speier said.

Lawmakers could also expand efforts to respond to and combat sexual misconduct, such as expediting the transfer process for sexual-assault victims and requiring a new oversight plan for implementation of a new harassment prevention and response policy. For example, it could let a victim transfer between military academies.

“The option would be up to the member,” a House Armed Services Committee aide said. “It allows that intra-academy transfer to happen, which was not allowed before.”

But there’s plenty of differences to hammer out in the proposals in the weeks ahead.

For example, dozens of House Democrats said this week that they would fight an effort to use the NDAA to divert public school funding for military families to private schools instead. In letters to the chairpersons of two key committees, more than 40 House Democrats said Tuesday that they would oppose the Education Savings Accounts For Military Families Act or any school voucher or privatization effort from being included in the NDAA.

As of Thursday, the effort wasn’t included in the latest draft of the defense policy bill, but could be added as an amendment in future debate, a House committee aide said.

Also, a controversial proposal by Rep. Mac Thornberry, R-Texas, chairman of the House Armed Services Committee, to cut 25 percent in spending from dozens of Defense Department agencies known as the “4th Estate” could be considered before his panel during the May 9 session.