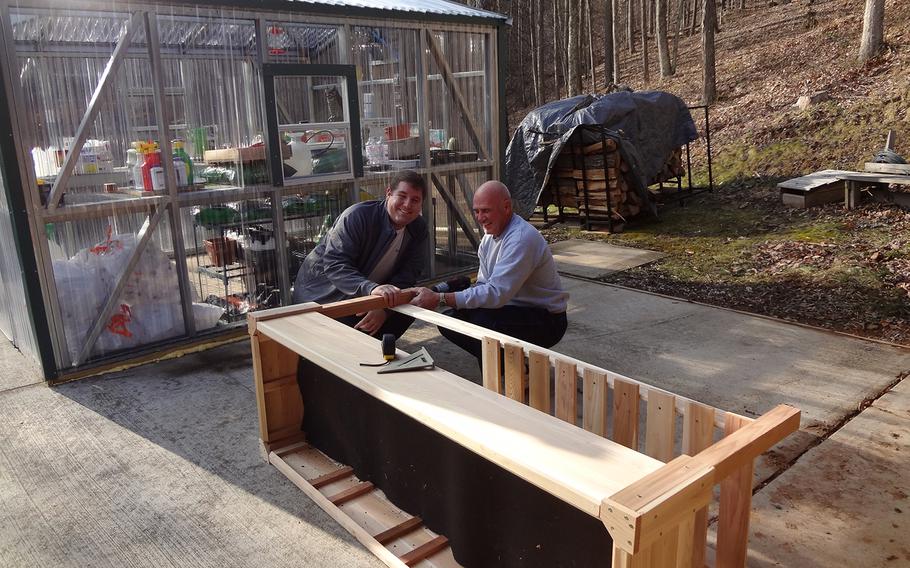 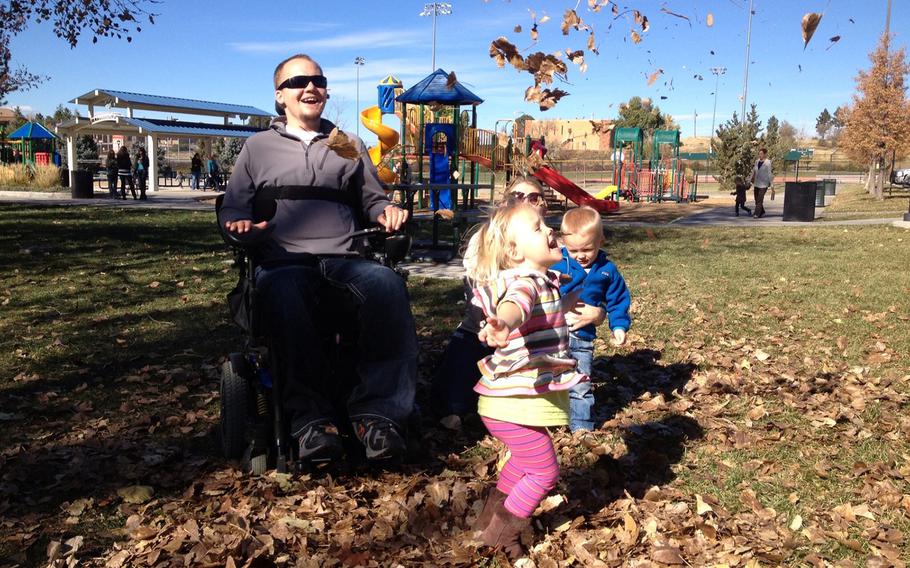 Matt Keil, a former Army staff sergeant who has been a quadriplegic since a sniper shot him in the neck in Iraq, plays at a park near his Colorado home with his three-year-old twins, Faith and Matthew, and his wife, Tracy. The family will receive financial insurance through the Wounded Warrior Project's new long-term trust program. (Photo courtesy of the Keil famil)

WASHINGTON — Back when Michael Baker was a nuclear submarine technician in the Navy, he was a triathlete who spent as much time as he could exploring the Hawaiian outdoors near his naval base.

But since a motorcycle accident eight years ago left him with extensive brain damage and without half of his right foot, much of his life is now spent confined to a couch of in his parents’ home in West Virginia.

His mother, Cathy, is relieved that he isn’t in a medical institution, but she quibbles with government officials labeling him a veteran who is “living independently.”

He requires 24-hour supervision; some days even crossing the room seems an insurmountable challenge.

“He still wants to do things, to be productive and useful with his life,” she said. “He has lost so much, but he hasn’t lost everything.”

In recent years, lawmakers and veterans groups have focused largely on making sure the Department of Veterans Affairs is prepared the fulfill the basic medical needs of the wave of new veterans: ending the benefits backlog, improving mental health care and expanding outreach efforts.

But absent from much of that conversation is an in-depth look at what it means to fully repay — or repair — veterans who return from service with life-altering injuries.

Benefits from the VA can be generous, but they are limited to medical needs and crises. They often don’t cover broader emotional and spiritual needs, like the desire to be a productive member of a local community.

This year, officials from Wounded Warrior Project will set aside $30 million to help about 300 injured veterans get closer to true independence, through additional medical care, therapy and assistance programs. It’s a dramatic expansion of the group’s three-year-old Independence Program, designed to provide financial security and peace of mind for wounded veterans.

It’s a lot of money, but officials say it meets just a fraction of the need.

“There’s a new vision of success for many of these wounded veterans,” said Steve Nardizzi, executive director of the Wounded Warrior Project. “It’s not institutional care or isolation at home.

“The vision for success should be the same as you and me: Having a happy life, getting back with their families, getting a job and being as independent as they can be.”

For Baker, a holdover from the program last year, that means weekly session with life coach Joe Olivito.

The two plan outings to restaurants and small projects around the house where Baker can do the majority of the work. The 30-year-old veteran missed being outside after his accident, so Olivito helped him build wheelchair-accessible gardening beds in the backyard.

“We couldn’t afford something like this,” Cathy Baker said of Olivito’s services. “It can run up to $120 an hour just for home medical care, and that isn’t the same kind of engagement.

“But with his coach, Mike can have a guy’s night out, just go to the movies with someone who isn’t his parents. It’s just gives him such a feeling of independence. It’s an absolute answer to a prayer for us.”

Veterans in the WWP program are screened to ensure financial need and potential for a better life. Organizers conducted several interviews with Baker and his parents on their hopes before sketching out long-term goals for the family and coordinating with local community groups.

Of the $30 million set aside this year, about $10 million will go toward 250 veterans with brain injuries, missing limbs and other potentially limiting serious injuries. All receive financial help from VA programs, but Nardizzi said the limitations of those funds demand help from outside groups like his.

About $20 million will be set aside in a trust for the long-term financial support of 40 families, ensuring independent living for at least 20 years.

Among those recipients is Matt Keil, a former Army staff sergeant who has been a quadriplegic since a sniper shot him in the neck during a patrol in Iraq. Today, he lives at home with his 3-year-old twins and wife, Tracy, who serves as his 24/7 caregiver.

Her biggest fear is that if she dies, Keil and his children wouldn’t be able to stay together.

“He’s capable of raising them, but he couldn’t do it alone,” she said. “He can handle finances. He can make household decisions. But because of his injuries, he can’t feed himself. He can’t pick them up. He can’t be in the house alone with them.”

The couple lives in Colorado with his sister and near her siblings, who helps Tracy Kiel for trips to buy groceries, get a haircut — even take a call from a reporter.

VA provides support, including a $2,100 monthly caregiver stipend for Tracy Kiel. But hiring a 24/7 nursing team to care for him at home would cost more than $50,000 a month, making institutionalization a more cost-effective solution.

The couple understand that, but they also know it would be devastating for their family to live apart.

With the WWP trust, Kiel could use the money to hire help and live in his home, without being a constant burden on his extended family.

“Now, we don’t have to worry,” his wife said. “If something were to happen all of the sudden, he could find a way to do this on his own. He could raise our kids.”

Money in the trust would be made available if the family encounters an unexpected need.

“Worrying about not being able to care for your family, that can be devastating,” she said. “This all takes a burden off his shoulders and mine.”

Nardizzi said the group hopes to add more families in coming years, but that would require massive amounts of new cash — even for WWP, which raised more than $150 million in fiscal 2012.

But the payoff will be finding ways for veterans “to get past the point of just surviving and instead, thriving.”

Baker and Olivito plan to sell homegrown produce at a local farmer’s market this spring. Cathy Baker said any money they make is irrelevant. The idea that her son could be a productive member of the community is priceless.

“These kids, they struggle with their injuries,” she said. “But they still have a willingness to serve. It’s in their blood to serve.”