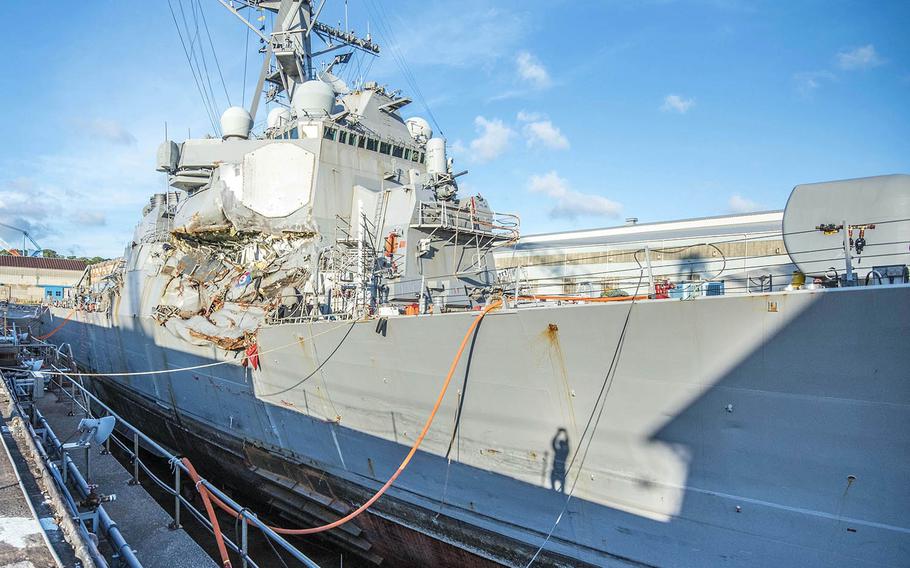 WASHINGTON — A preliminary hearing for two junior officers at the controls when the USS Fitzgerald and a merchant container ship collided last year in the busy waters off the coast of Japan highlighted a series of errors by the ship's crew.

The collision killed seven sailors in the early hours of June 17. Until just moments before the strike, the accused officers in the Combat Information Center several levels below deck were unaware of the danger from nearby ships. On that, the government and the defense at Wednesday’s Article 32 hearing agreed.

In an 11-hour hearing at the Washington Navy Yard, prosecutors painted a picture of Lt. Irian Woodley, the ship’s surface warfare coordinator, and Lt. Natalie Combs, the tactical action officer, as failing at their jobs, not using the tools at their disposal properly and not communicating correctly. They became complacent with faulty equipment and did not seek to get it fixed, and they failed to communicate with the bridge. Had they done those things, the government contended, they would have been able to avert the collision.

“Imagine the Crystal, a 29,000-ton container ship, suddenly takes up the entire (radar) screen,” prosecutor Lt. Cmdr. Katherine Shovlin told the hearing officer, who will decide whether to recommend that the accused officers face courts-martial. “There was not a breakdown of communication. There was …. no communication.”

Defense attorneys countered, saying the officers were strong performers whose equipment didn’t work properly. The radar and the Automatic Information System they were working with were in a “degraded” state, so many of the ships around the Fitzgerald did not appear. The officers were completely unaware of the other ship’s approach. The problems were systemic, the defense argued, with operational tasking so intense that the ship had no time to train or do repairs.

“The Fitz was a wreck of a ship – I do not state that lightly,” said David Sheldon, Combs’ civilian attorney. “And the U.S. Navy knew that.”

Woodley is accused of not carrying out his duties, which were to maintain an accurate picture of all the vessels around the Fitzgerald, oversee other surface watch standers in the combat center and share information and recommendations with those navigating and driving the ship. Combs was in charge of the combat center. Her job was to serve as the commanding officer’s eyes and ears, support the bridge with vital contact information and make sure watch standers in the center were doing their jobs properly.

Both face three charges: dereliction in the performance of duties through neglect resulting in death, negligent hazarding of a vessel and negligent homicide.

The hearing officer has 15 days to make his recommendation on whether all or some of those charges should go forward in a court-martial. It will be up to the convening authority, Adm. Frank Caldwell, to decide whether to accept those recommendations.