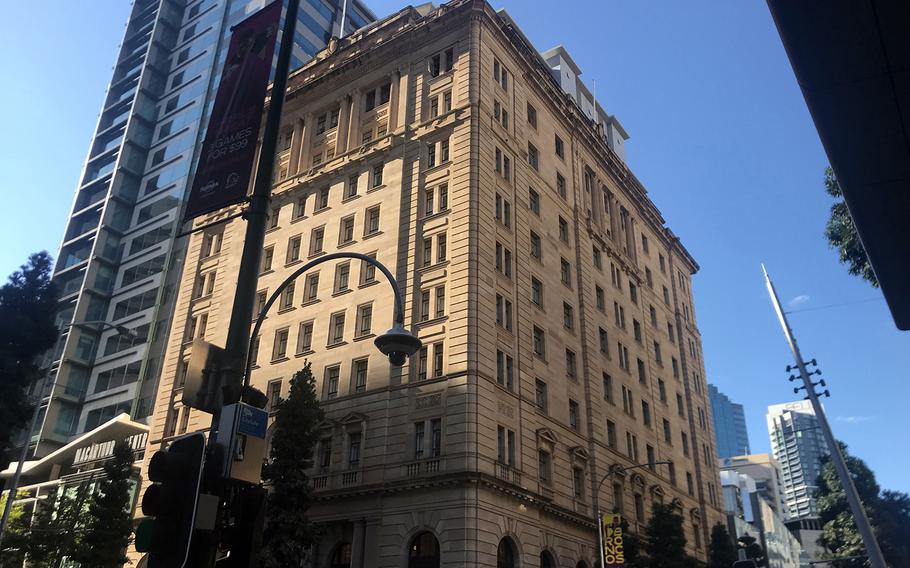 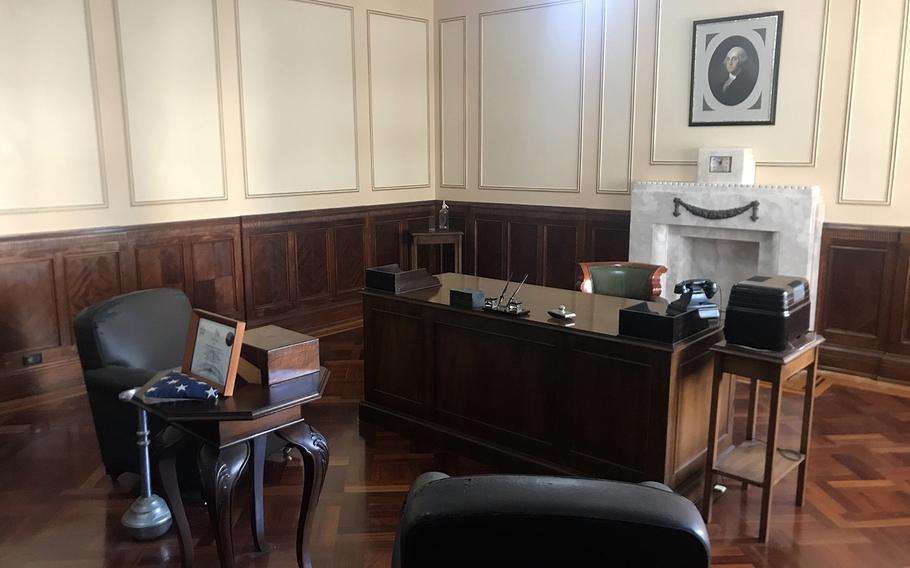 Buy Photo
Gen. Douglas MacArthur's office in Brisbane's historic AMP Building looks just as it did when it served as his headquarters during World War II. (Seth Robson/Stars and Stripes) 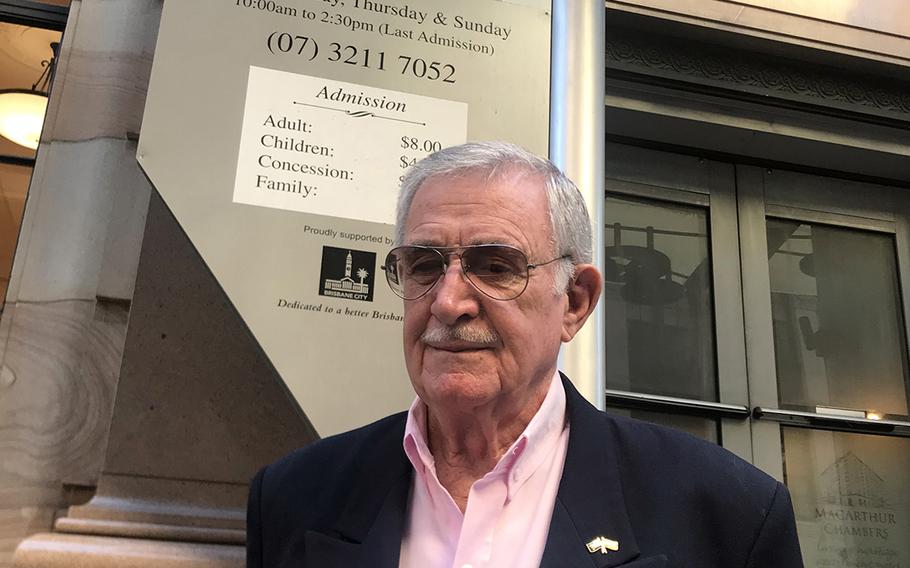 Buy Photo
Ron Rees, who met Gen. Douglas MacArthur in the street during World War II, is a volunteer guide at the MacArthur Museum Brisbane. (Seth Robson/Stars and Stripes) 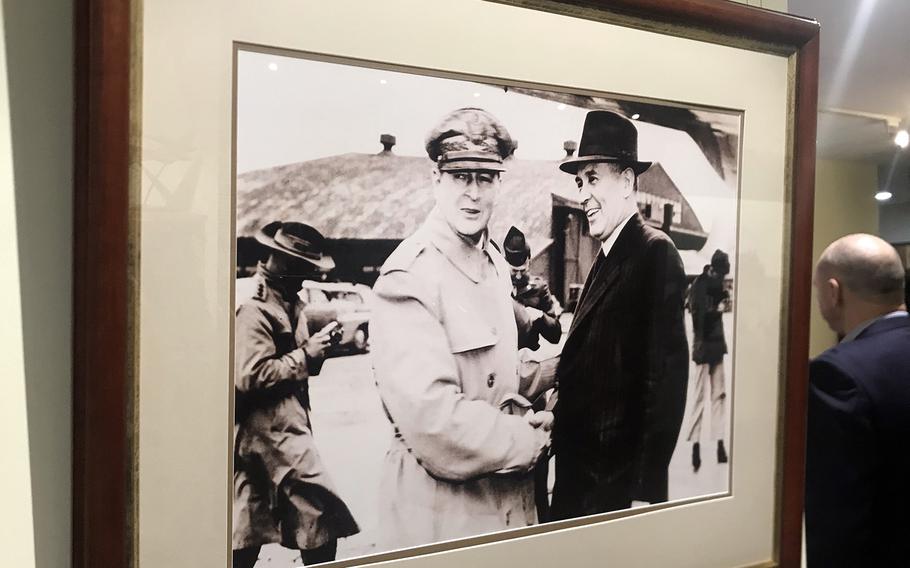 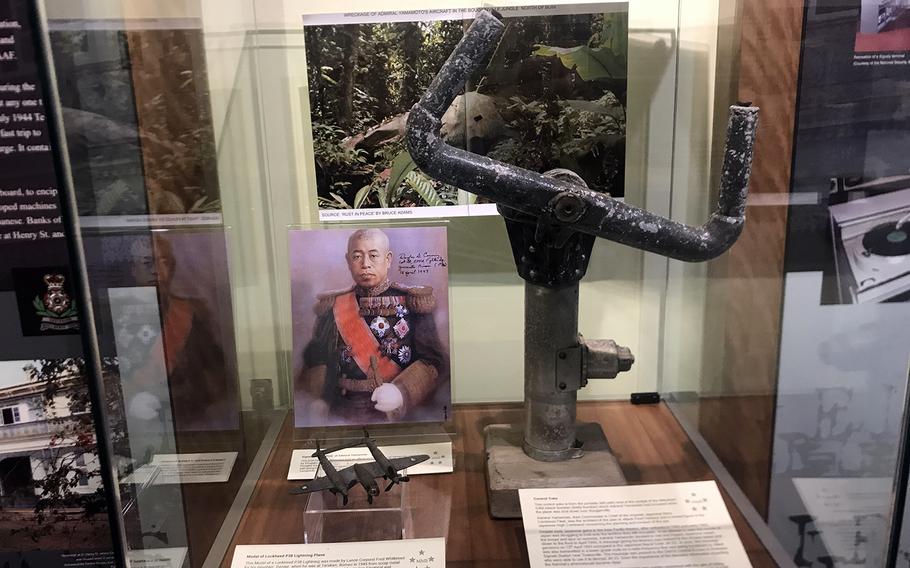 Buy Photo
A glass case at the the MacArthur Museum Brisbane holds the control yoke from a Mitsubishi G4M bomber shot down over the island of Bougainville, killing Japanese Adm. Isoroku Yamamoto, who masterminded the attack on Pearl Harbor. (Seth Robson/Stars and Stripes)

Australian Ron Rees was just 6, on his way home from a fishing trip with his older brother, when he met Gen. Douglas MacArthur on the street in 1942.

Rees raised his hand in the two-finger Wolf Scout salute, which MacArthur took to be a “V for Victory” sign.

Rees, now an 83-year-old retired Australian Army officer and a volunteer guide at the MacArthur Museum in the general’s old Brisbane headquarters, recalled that he had written “U.S. Army” on his school cap. When MacArthur noticed, he asked Rees what his rank was and, getting no reply, handed the boy a shiny lieutenant’s bar.

MacArthur’s wartime office in Brisbane’s historic AMP building looks exactly like it did during World War II. It’s been fitted out with furniture matching what was there when it was the focal point for the Pacific campaign.

A sign in the room reads: “The US Seventh Fleet was formed in this headquarters 15 March 1943.”

It’s the sort of thing that might appeal to modern 7th Fleet sailors. Museum staff estimate about 100 crew from the USS Ronald Reagan aircraft carrier visited during the recent Talisman Sabre exercise Down Under.

The museum also hosted a group of Japan Self-Defense Force and Australian Defence Force personnel during the exercise. Rees was waiting at the front door at opening time that day proudly wearing a blazer with an American eagle patch.

Standing among the exhibits, he talked about a second chance meeting with MacArthur during a trip to the Waldorf-Astoria Hotel in New York. The pair also exchanged letters over the years, he said.

The museum, which opened in 2004, includes exhibits detailing MacArthur’s time in Brisbane and the city’s role in World War II. There’s a large conference table that the general used for meetings covered in maps and other historical documents.

A glass case holds the control yoke from a twin-engine Japanese Mitsubishi G4M bomber shot down by a U.S. P-38 Lightning fighter over the island of Bougainville, killing Adm. Isoroku Yamamoto, who orchestrated the attack on Pearl Harbor.

There are replicas of MacArthur’s distinctive corncob pipe, aviator sunglasses and gold-trimmed hat and memorabilia such as matchbooks tagged with his “I shall return!” pledge to the people of the Philippines.

The museum is also a good place to learn about Brisbane’s war history. There’s a section devoted to local women who married American soldiers and moved to the U.S. after the war.

But perhaps the real treasures are volunteers like Rees who can tell you what it was really like during those dark days and how strong the bonds are between the U.S. and Australia.

TIMES: Open 10 a.m. to 3 p.m. Tuesdays, Thursdays and Sundays. Other times are available for groups by appointment. Allow at least an hour to see all exhibits.

FOOD: None available at the museum, but there are restaurants serving everything from breakfast to beer across the street.