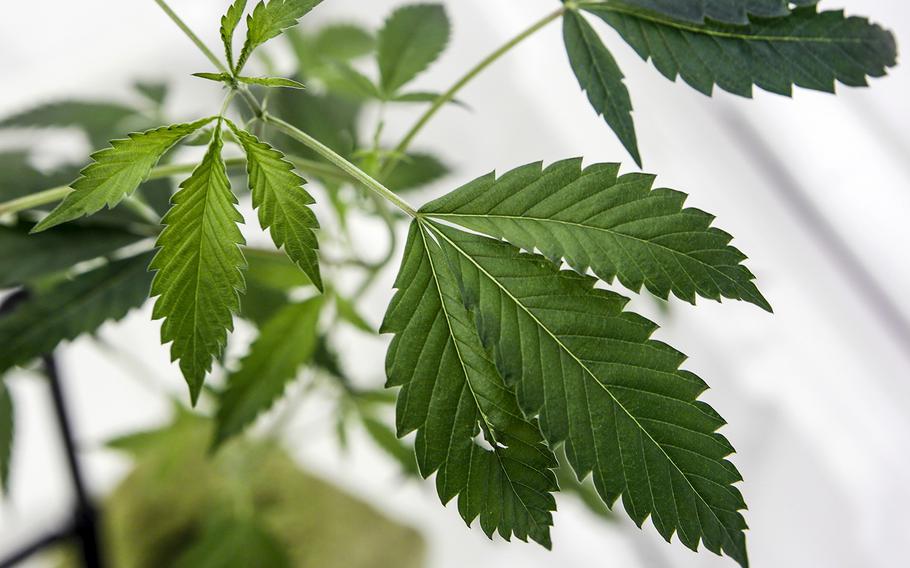 WASHINGTON — Despite pleas from congressmen, veterans and the country’s largest veterans service organization asking for research into medical marijuana, the Department of Veterans Affairs won’t initiate a study into the drug’s effects on post-traumatic stress disorder, VA Secretary David Shulkin wrote in a letter to House Democrats.

The letter, dated Dec. 21 and publicly released Tuesday, was written in response to a request in October from Democrats on the House Committee on Veterans’ Affairs for the VA to initiate research into the efficacy of medical cannabis. In their request, the Democrats cited the country’s opioid crisis and the growing demand from veterans and major service groups that want cannabis available as a treatment option for chronic pain and PTSD.

The letter states that a VA review last year of existing research found a connection between marijuana use and increased odds of suicide, as well as increased evidence of mania and psychotic symptoms. It calls attention to the VA’s efforts to reduce opioid prescriptions, and the letter lists alternatives available to veterans through the VA, including yoga, acupuncture, massage therapy and tai chi.

Rep. Tim Walz, D-Minn., the ranking Democrat on the House VA oversight committee, who signed the October letter, on Tuesday called Shulkin’s response “disappointing and unacceptable” and an attempt to mislead the veterans community.

Walz and other Democrats fired back a request Tuesday for Shulkin to explain the specific barriers preventing the VA from researching marijuana. They asked for an explanation by Feb. 1.

In a scathing response Tuesday about Shulkin's letter, John Hudak, deputy director of the Center for Effective Public Management at the Brookings Institution, called the VA secretary’s response “an unfortunate combination of false information, incomplete analysis and incomprehensible logic.”

Shulkin “appears to wave off committee members’ concerns about an issue that affects the lives of millions of soldiers and veterans across the United States,” Hudak wrote in a report.

Hudak said Shulkin mischaracterized federal law, and the claim that the VA is barred from researching marijuana is “simply false.” He went on to say Shulkin, who is also a physician, cherry-picked research without providing context.

His report follows a decision earlier this month from Attorney General Jeff Sessions to give discretion to U.S. attorneys to decide how aggressively to enforce federal marijuana laws. Though it doesn’t affect medical marijuana, some advocates believe the uncertainty created by the decision could push more veterans to stay silent about their marijuana use and instead self-medicate. In statements from the White House, President Donald Trump’s administration stood by the decision.

“Combining concerns about the Attorney General, language from the White House supporting Mr. Sessions and a VA Department unwilling even to conduct research into the possibility that marijuana could have medical value speaks loudly to veterans,” Hudak wrote. “It tells them that this administration will be tough on marijuana and that it has no interest in answering important medical questions — even those that could improve the lives and well-being of our wounded warriors.”

In May, Shulkin said during a public address that he was open to learning about any evidence marijuana could be used to treat veterans. Motivated in part by those comments, the American Legion, with a membership of 2 million veterans, aggressively advocated last year for the VA to spearhead research.

The Legion commissioned a poll in November that found 92 percent of veteran households are in favor of more marijuana research. The Legion sent its own requests for research to Shulkin last fall, but they went unanswered.

The group also tried to drum up support at the VA for the first government-approved study of marijuana’s effects on veterans with PTSD. The study is underway in Phoenix, but researchers are struggling to recruit enough eligible veterans.

When researchers and the Legion requested help from the Phoenix VA hospital, the VA said federal law restricted the agency from recommending the study to patients. As of Tuesday, the study had enrolled 35 veterans of the 76 needed to complete the study.

The American Legion and the group of House Democrats believe the VA is best positioned to research marijuana because of its access to veterans struggling with PTSD whose symptoms haven’t improved through other treatments.

“We are specifically interested in VA research into the impact of medical cannabis on veterans suffering from chronic pain and PTSD,” Walz said in a written statement released Tuesday. “If there is indeed legislative action needed, I sincerely hope Secretary Shulkin will clearly identify the steps Congress must take so that VA may begin their research without delay.”