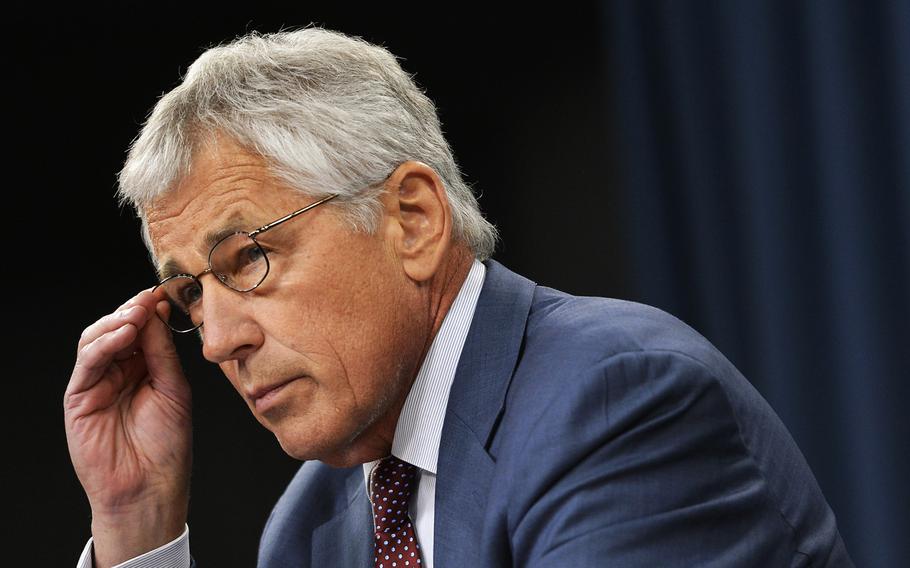 Secretary of Defense Chuck Hagel conducts a news briefing at the Pentagon in Arlington, Va., July 31, 2013. (Glenn Fawcett/Department of Defense)

But the moves appear unlikely to appease lawmakers who have been calling for a dramatic overhaul of military sexual assault cases, starting with taking the legal responsibilities out of the chain of command.

In a memo to staff, Defense Secretary Chuck Hagel called sexual assault “a stain on the honor of our men and women who honorably serve our country, as well as a threat to the discipline and the cohesion of our force.”

The new policies include creation of a new legal advocacy program to provide assistance to victims in sexual assault litigation and exploration of ways to give victims more input in the sentencing phase of courts-martial.

They will also mandate more monitoring of sexual assault incidents, both in “timely” follow-up reports by generals or flag officers and additional investigations by the Defense Department’s inspector general.

The Pentagon also recently established an independent panel to review the entire sexual assault military legal process, including how investigations and prosecutions are carried out. Congress has mandated creation of that review board

Under Secretary of Defense for Personnel Jessica Wright said the changes show “an unprecedented level of senior level engagement on these issues” and a commitment by senior leaders to help victims seek justice.

“The bottom line is that sexual assault is not tolerated, it’s not condoned, and it’s not ignored,” she said.

In a statement, Sen. Kirsten Gillibrand, D-N.Y., called the moves “positive steps forward but … not the leap forward required to solve the problem.”

She and supporters in Congress have been pushing for massive revisions to the military justice code that would take away handling of serious crimes, including sexual assault, from the chain of command in which they occur.

“As we have heard over and over again from the victims, and the top military leadership themselves, there is a lack of trust in the system that has a chilling effect,” she said. “It is time for Congress to seize the opportunity, listen to the victims and create an independent, objective and non-biased military justice system.”

Officials from the victims advocacy group Protect Our Defenders said the establishment of independent legal assistance for victims is a significant change in fixing the military’s problems, but added “these changes are mostly small tweaks to a broken system.”

“The DOD order falls short of reform that would protect victims from the outset: by keeping the decision to prosecute within the chain of command,” Protect Our Defenders Executive Director Taryn Meeks said.