Gasthaus Licht-Luft in Kaiserslautern is a ‘light, airy’ setting to enjoy an alfresco meal 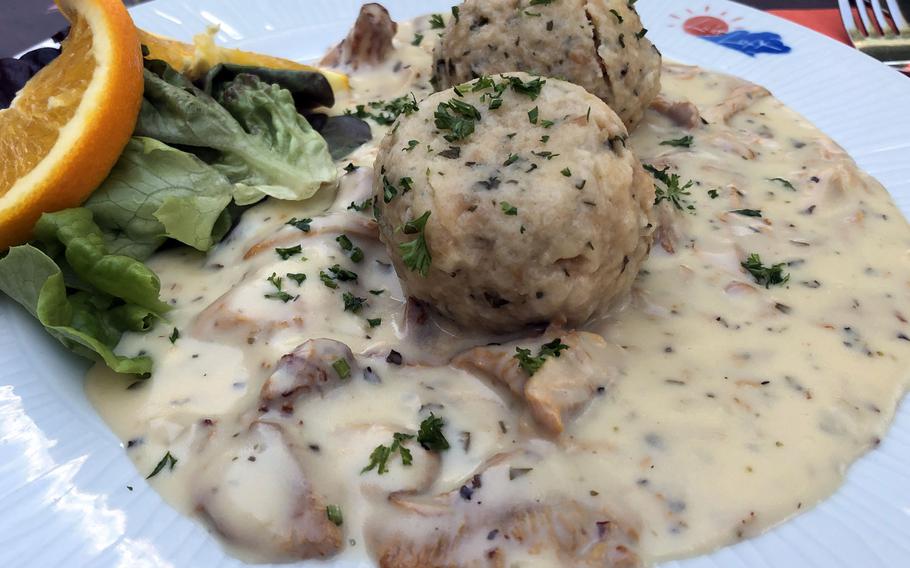 A seasonal specialty, chanterelle mushrooms in a herbed cream sauce over dumplings at the Licht-Luft restaurant in Kaiserslautern, Germany. (MICHAEL ABRAMS/STARS AND STRIPES)

A seasonal specialty, chanterelle mushrooms in a herbed cream sauce over dumplings at the Licht-Luft restaurant in Kaiserslautern, Germany. (MICHAEL ABRAMS/STARS AND STRIPES) 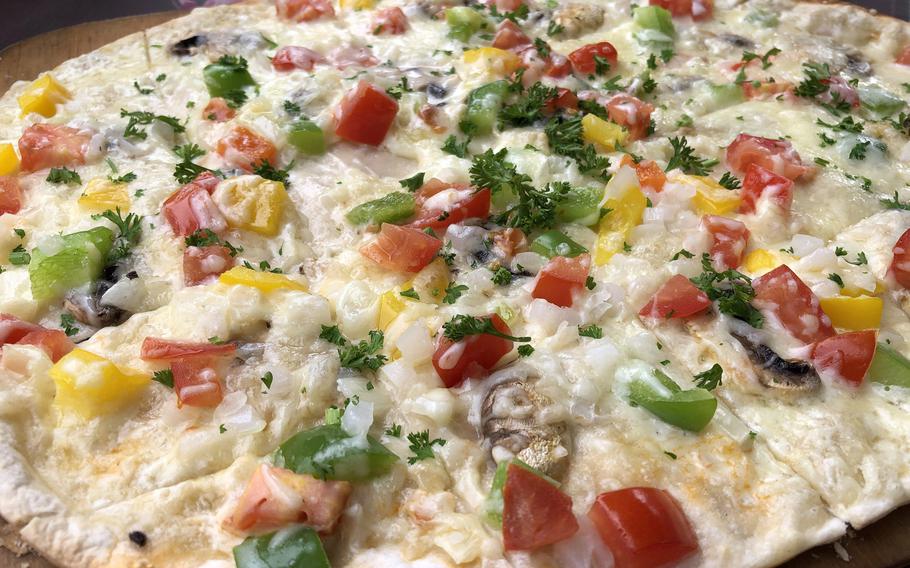 The vegetarian flammkuchen at Licht-Luft in Kaiserslautern was delicious. The Crispy crust is covered with tomatoes, peppers, cheese and onions. (MICHAEL ABRAMS/STARS AND STRIPES) 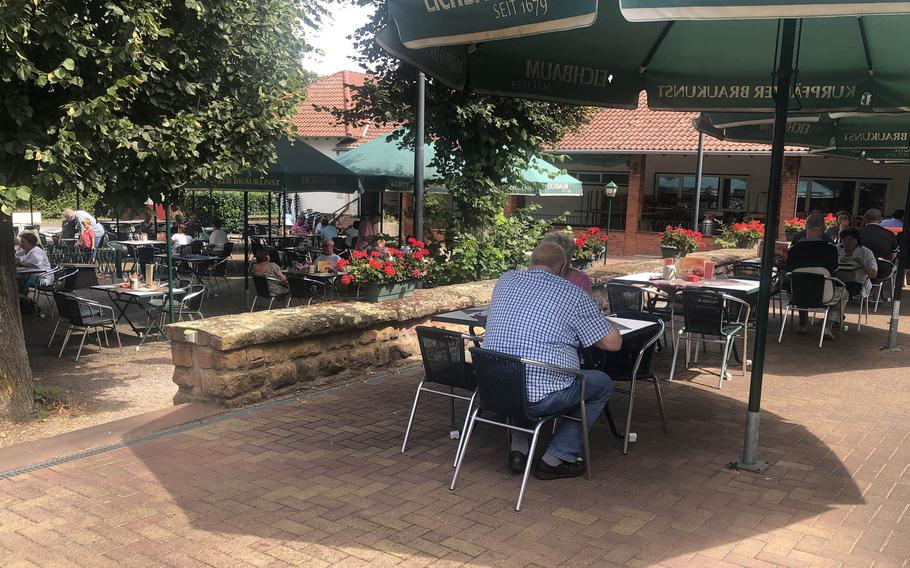 The beer garden at Licht-Luft in Kaiserslautern, Germany, is a nice shady place for lunch on a hot afternoon, although not as as leafy as the one at Quack nearby. (MICHAEL ABRAMS/STARS AND STRIPES) 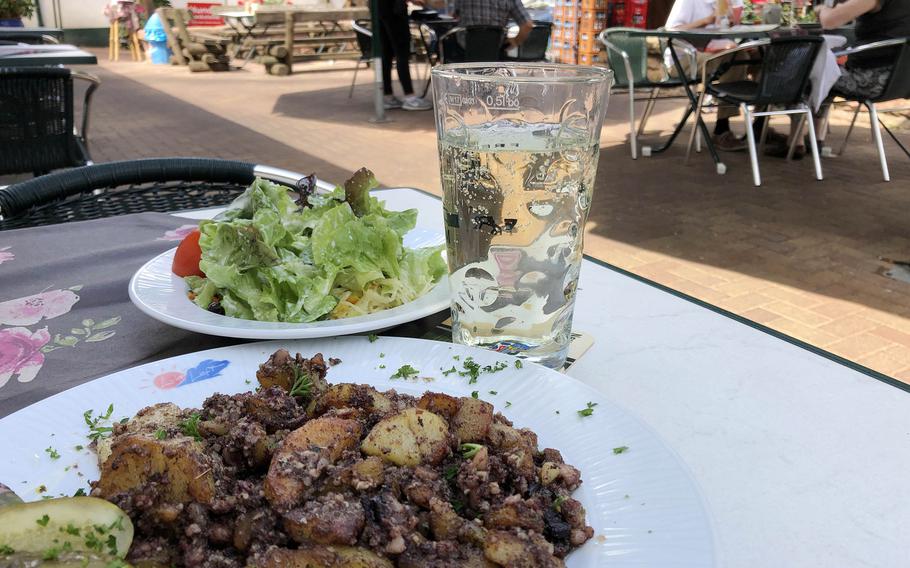 The Paelzer Worscht-Grumbeere is a one of many specialties of the Pfalz region at Licht-Luft in Kaiserslautern, Germany. It is fried potatoes with liver and blood sausages that have been removed from their casings. Very tasty, not unlike American hash. (MICHAEL ABRAMS/STARS AND STRIPES) 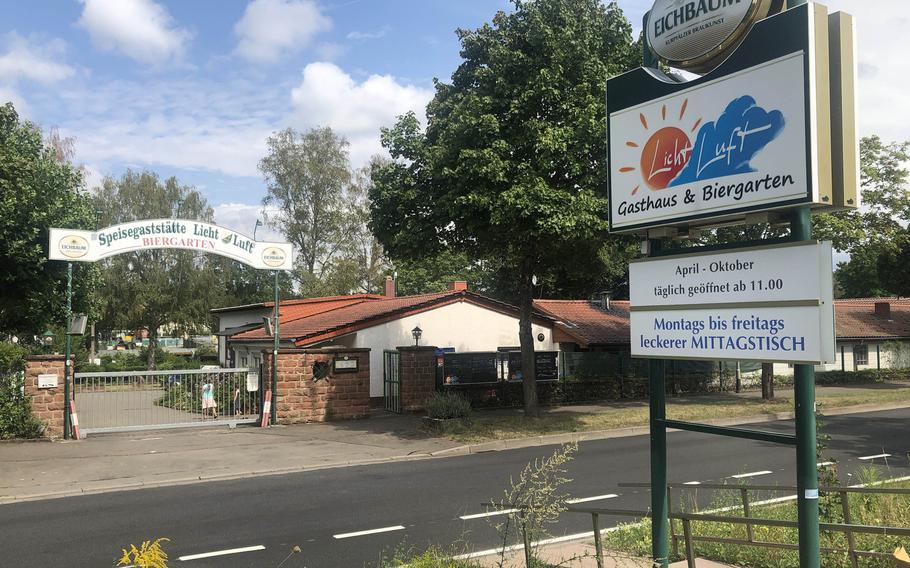 Licht-Luft, a restaurant behind Kleber Kaserne in Kaiserslautern, Germany, is a nice place for a shady summer lunch, or early dinner. It serves mostly German-style food. (MICHAEL ABRAMS/STARS AND STRIPES)

One of my favorite things about the warm season in Germany, from spring to fall, is alfresco dining.

Sure, a romantic, cozy restaurant is fine, but eating and drinking outdoors, enjoying the weather and the food, is hard to beat.

That’s especially true in these coronavirus times, where social distancing and aerosols are things to consider.

While on the hunt for a nice place to sit outside and relish the food, I came across Gasthaus Licht-Luft, right behind Kaiserslautern’s Kleber Kaserne.

Licht-Luft means light-air, and the setting offers both, as the restaurant sits in a local community garden and once was the gardeners’ clubhouse. It’s not that big of a building, but from April to October, the focal point is its expansive beer garden behind it.

Most of the shade is from umbrellas, unlike the leafy shade at Quack, a restaurant next door. But on a recent hot, sunny August afternoon, it was quite comfortable.

Now, let’s get to the food. It is mostly German-inspired, with schnitzels and steaks, but features some vegetarian dishes as well, plus soups, salads, pasta and flammkuchen. And being in the Pfalz region of Germany, local specialties can’t be missing from the menu.

Licht-Luft also offers weekly and seasonal specials. Since the dish was in season, we tried the chanterelle mushrooms in an herbed cream sauce over dumplings. It was delicious — the mushrooms tender, the sauce zesty and the dumplings light and moist.

The flammkuchen, a pizza-like dish with a thin flaky crust and sparse toppings, passed muster, and their vegetarian version — with mushrooms, peppers, tomatoes, onions and cheese — was perfect on a hot day.

We had to try a Pfalz specialty. Usually this would be liver dumplings, saumagen (pig’s belly stuffed with pork and potatoes) or bratwurst, or a platter of all. Here at Licht-Luft they have a dish called Paelzer Worscht-Grumbeere, fried potatoes with liver and blood sausages that have been removed from their casings. Sounds a little strange, but it was very tasty, not unlike an American hash. Grumbeere is regional slang for potatoes, by the way.

You can wash this all down with wines from the Pfalz, mostly from nearby Freinsheim, or Eichbaum beer, which is not from the Pfalz, but from Mannheim, on the other side of the Rhine River.

They don’t have dessert on the menu, but do offer various cakes and other sweets, as people also come for “Kaffee and Kuchen,” the German afternoon ritual of having coffee and cake.

For an alfresco lunch or dinner, Gasthaus Licht-Luft is a nice place to be before winter comes and we have to worry more about what’s in the air indoors again.

Location: Entersweilerstrasse 51, 67657 Kaiserslautern Behind Kleber Kaserne, near the restaurant Quack

Information: Online: gasthaus-lichtluft.de. You need to wear a mask to your table and will be asked to fill out contact information. To help with social distancing, you enter through the restaurant and exit through the garden.