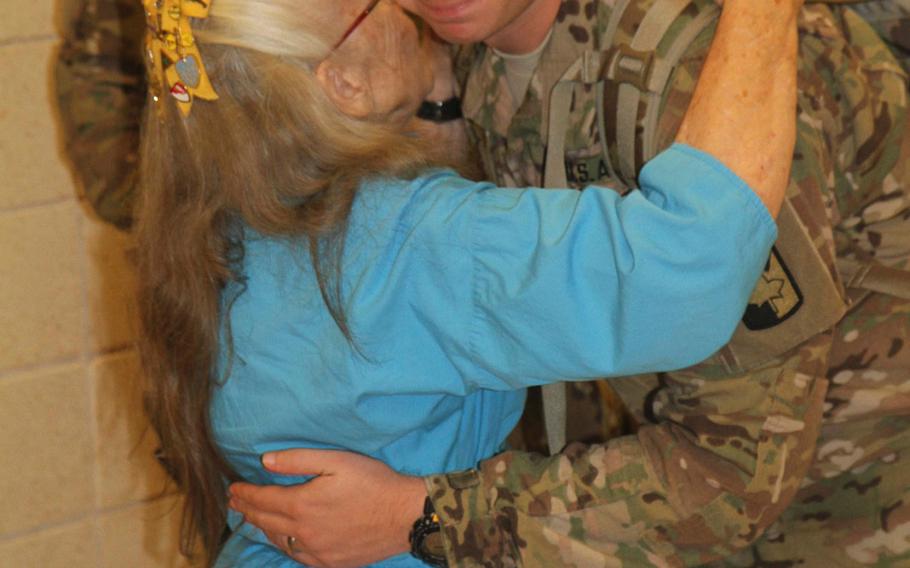 Capt. Edward Boncek receives a hug from Elizabeth Laird, affectionately known as "The Hug Lady," prior to boarding his flight to Afghanistan, July 11, 2013 at Fort Hood's Robert Gray Army Airfield. Soldiers asking the Defense Department and Fort Hood through a petition to rename in her honor the terminal at the airfield. (Chris Bridson/U.S. Army)

Capt. Edward Boncek receives a hug from Elizabeth Laird, affectionately known as "The Hug Lady," prior to boarding his flight to Afghanistan, July 11, 2013 at Fort Hood's Robert Gray Army Airfield. Soldiers asking the Defense Department and Fort Hood through a petition to rename in her honor the terminal at the airfield. (Chris Bridson/U.S. Army) 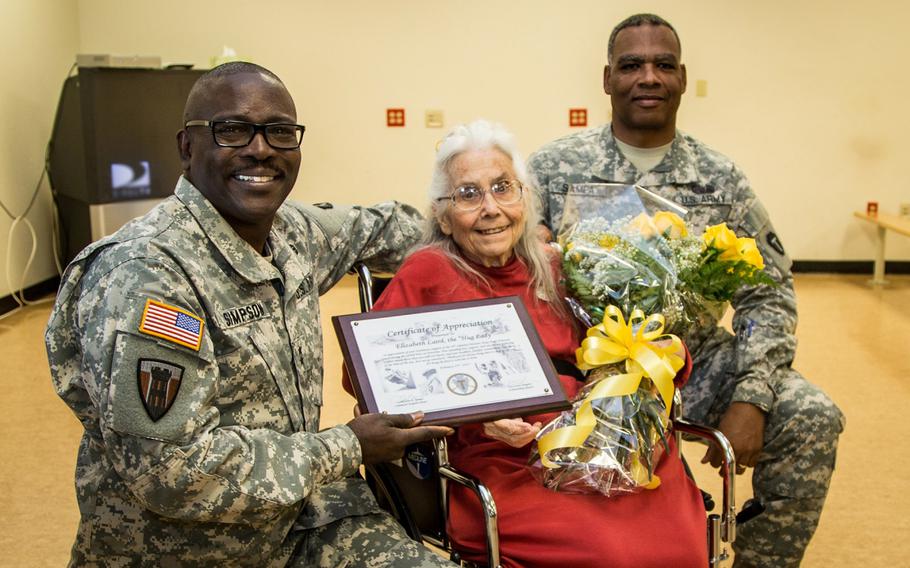 AUSTIN, Texas — No matter what unknown circumstances laid ahead for soldiers as they deployed from Fort Hood, they could always rely on one thing - Elizabeth Laird would see them off with a hug and be right there with another when they returned home.

Better known to soldiers at the Texas base as the “Hug Lady,” Laird was a fixture for about 12 years at the terminal at Robert Gray Army Airfield.

“It’s just nice to have somebody there for you when you leave and when you go,” said Sgt. Christopher Peckham, a Chinook helicopter mechanic at Hunter Army Airfield in Georgia. While stationed at Fort Hood, he received a hug from Laird to and from a rotation at the National Training Center at Fort Irwin in California.

“A lot of soldiers don’t have immediate family where they are stationed, especially the single guys,” Peckham said. “It’s a local comfort when you are leaving somewhere and return back after an extended period of time.”

It didn’t matter the time of day or whether it was a holiday, Laird was there, often wearing boots, a belted dress and a yellow hair ribbon adorned with military pins. She took her time, smiling, offering prayers and speaking to each soldier as she hugged them goodbye. Her delicate, grandmotherly demeanor a sharp contrast to the soldiers weighed down by bulging backpacks and rifles.

But Laird’s mission at Fort Hood ended Christmas Eve 2015 when she died at age 83 after a bout with breast cancer. During her time in a Killeen hospital, the Killeen Daily Herald reported soldiers would visit Laird to show their gratitude and appreciation for her unwavering dedication to the troops.

Soldiers call for honors Now, soldiers are once again rallying together to show their support for Laird by asking the Defense Department and Fort Hood through a Change.org petition to rename in her honor the terminal at Robert Gray Army Airfield where she spent hours offering countless hugs.

“I chose to sign the petition because of my love for her calling,” said Tyler Morgan, a former sergeant who flew out of the central Texas base in 2014 for a rotation in Korea. Laird hugged him as he left and was waiting with a hug when he returned.

“I couldn’t think of a more fitting homage to the woman who loved the troops so much, she just had to hug us all,” he said.

Peckham started the petition, which has garnered more than 85,000 signatures in slightly more than a week. He came up with the idea for the petition while talking with a friend last month.

“Everybody I know that’s deployed out of Hood obviously knows about her. It just occurred to me one day, why hasn’t anything been done?” he asked. “My buddy … was like go for it. Go to Change.org and make a petition.”

So Peckham did. The first day that he posted the petition, he saw it had 5,000 signatures before he went to bed that night. When he woke up, it had 10,000 more.

“I expected that many signatures, just not that fast,” Peckham said. “There’s a lot of people that have deployed out of Hood. I expected a lot people to know about it, but I did not expect two days after [posting the petition] having 50,000 people sign it.”

But the petition to name the Fort Hood terminal for Laird has a complication – it’s already named for someone else.

Though the petition is a well-intentioned call to honor a woman beloved by soldiers, the terminal, which opened in 2005, is named the George Larkin Terminal. Larkin, like Gray, the airfield’s namesake, was a Doolittle Raider during World War II.

More so, Fort Hood officials said there is a covered plaque honoring Laird’s actions in the terminal, just waiting to be unveiled at a dedication ceremony.

The petition arose while base officials worked with Laird’s family to schedule a public ceremony, which will be held at 10:30 a.m. July 1 at the airfield, Fort Hood’s public affairs office confirmed Wednesday. The commemorative plaque will be unveiled during the ceremony in the room where deploying soldiers gather to await their flights. This room is where Laird routinely provided words of encouragement and gave hugs to departing soldiers.

‘Ordered’ to hug Laird first began hugging soldiers in 2003, according to her obituary. Her involvement at deployment flight lines started with volunteering for the Salvation Army as a way to show her appreciation for soldiers as post-9/11 conflicts escalated. That led her to hugging each soldier as they left Fort Hood for Iraq, Afghanistan or training rotations.

Former III Corps and Fort Hood Command Sgt. Maj. William “Joe” Gainey “ordered” her to hug each of his troops upon leaving and returning. She continued to do so and soon was referred to by soldiers as the Hug Lady.

“This was her love -- many times talking about the look in the soldier’s eyes, how proud they were to serve their country to protect their loved ones at home,” Laird’s obituary reads.

However, her service to country began decades before. In 1949, Laird enlisted in the Women in the Air Force, an auxiliary branch that allowed women to serve in limited roles in the Air Force, in her hometown of Birmingham, Ala. She served until 1951, when she got married and had a son, according to a 2012 profile of Laird in the Fort Hood Herald.

She landed in the Fort Hood area in the 1970s with her third husband Ray Laird. Together, the couple ran a tax preparation business called, Have Pencil Will Travel. She continued to run the business after her husband died and did so until her own passing.

Aside from her dedication to soldiers, Laird also visited nursing homes to give residents blankets she crocheted. Hundreds attended her funeral, including the first lady of Texas, Cecilia Abbott, reported the Killeen Daily Herald.

Peckham said he did not intend to take away honors from Larkin. He was unaware the terminal had a name. However, he thinks the plans for the plaque will be a fitting memorial.

“The room where she was every single time would be pretty appropriate for her to have,” Peckham said. “She’s definitely made an impression on many people’s — soldiers and families — lives. It would be a good way for her to be remembered.”