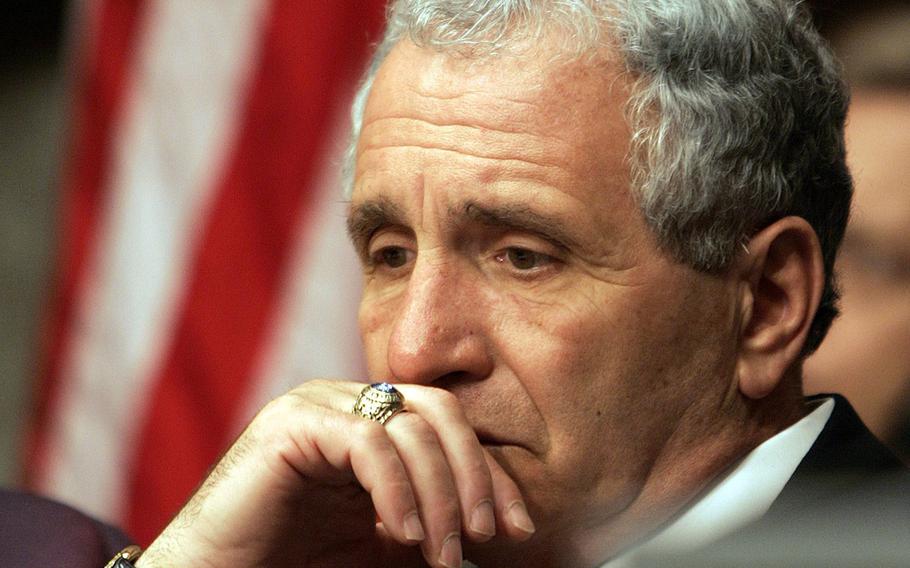 In a 2005 file photo, Anthony Principi chairs a hearing of the Defense Base Closure and Realignment Commission in Washington, D.C. (TNS)

Former VA Secretary Anthony Principi says he “found it astounding” that three wealthy friends of President Donald Trump, members of his Mar-a-Lago country club in Palm Beach, Fla., were able to affect executive hiring at the Department of Veterans Affairs, and might have influenced VA policy.

The nonprofit newsroom ProPublica reported this month that Trump and his White House staff allowed billionaire Ike Perlmutter, physician Bruce Moskowitz and lawyer Marc Sherman, none of whom ever served in the military, to screen candidates for senior VA executive positions, helping to determine who got hired, promoted and fired — including nominees requiring Senate confirmation.

In an attempt also to influence VA policy, the trio reportedly had daily communication with then-VA Secretary David Shulkin or senior staff, suggesting programs, particularly on veterans’ health care, to carry out a White House agenda aimed at privatizing more of the medical care that veterans receive.

It was an agenda that Shulkin and senior aides had resisted, or moved too slowly on, resulting in firings, force retirements and denied promotions.

ProPublica said it relied on interviews with former VA officials and on hundreds of emails between VA staff and the so-called “Mar-a-Lago Group.” Journalist Isaac Arnsdorf obtained the emails through the Freedom of Information Act. He reported that the trio was led by Perlmutter, 75, chairman and CEO of Marvel Entertainment.

What alarmed Principi, and why as a lifelong Republican he is comfortable commenting on the report, is that the outsiders’ influence, if reported accurately, contrasts so sharply with marching orders Principi got from President-elect George W. Bush before he was nominated for VA secretary in January 2001.

Interviewed by Bush and then-Vice President-elect Dick Cheney at the Madison Hotel in Washington, Principi recalled that the focus was on veterans.

“He said, ‘Tony, you select your team. I am holding you accountable. You surround yourself with dedicated, knowledgeable, experienced people who really care about the mission. The only thing I ask of you is to please coordinate with White House Office of Personnel. Let them know what you’re doing.’

“And I surrounded myself with Republicans and Democrats,” Principi said. His staff included Democrats who were Clinton administration holdovers including a senior adviser who became acting undersecretary for benefits, his deputy chief information officer and his chief of staff, who was a career VA employee.

“That was good governance,” said Principi. “If these [Mar-a-Lago] assertions are true, I don’t think that’s good governance. It’s not the way the nomination and appointment process should work. And with regard to policy, I directed the policy at VA, for better or worse.”

He had frequent discussions with the White House Domestic Policy Council and worked VA budgets with its Office of Management and Budget, Principi said. “We had back and forth. But it all emanated from the 10th floor — my floor — at the VA.”

That’s not the authority Trump, his friends and White House team allowed Shulkin, according to ProPublica. Perlmutter, Moskowitz and Sherman reviewed “all manner of policy and personnel decisions,” it reported. They “prodded the VA to start new programs.” VA leaders traveled to Mar-a-Lago to “kiss the ring” of Trump’s friends at taxpayer expense, one former VA official told ProPublica.

Principi said he lacks firsthand information to be able to comment on many disturbing details in the report. But he believes the Mar-a-Lago arrangement increased turmoil in a department that has been relentlessly battered by scandal and criticism, some of it overblown by partisan politics, for several years.

“They have hurt the VA in that there has been a lack of leadership,” Principi said. “There has been so much uncertainty, so much inner turmoil and so much loss of time. And the career force is demoralized.”

One email exchange from last April involved then-acting VA Secretary Robert Wilkie following his visit to Mar-a-Lago, which VA said coincided with an official visit to a local VA hospital. Moskowitz wrote to thank Wilkie for “a very productive meeting,” explaining “I speak for the group that both you and Peter,” presumably then-VA chief of staff Peter O’Rourke, “astounded all of us on how quickly and accurately you assessed the key problems and more importantly the solutions that will be needed to finally move the VA in the right direction.”

“Sir it was my honor,” Wilkie responded. “Thank you for taking time and I look forward to seeing you soon.”

“These individuals are not administration officials, and have no direct influence over VA,” said Cashour. “That said, we appreciate hearing from anyone who has good ideas about improving care and benefits for veterans, and talk to a broad range of people, including academics, doctors, veterans groups and many others.”

He added, “Almost everything in the [ProPublica] story was before Secretary Wilkie came to VA. [He] has been clear how he does business — no one from outside the administration dictates VA policies or decisions. That’s up to him and President Trump. Period.”

Rep. Tim Walz, of Minnesota, ranking Democrat on the House Veteran Affairs Committee, said the “actions taken by these individuals and VA leaders appear to contradict” such claims and the arrangement “reeks of corruption and cronyism.”

Walz wrote to Wilkie, who became VA secretary in late July, asking that the department “hand over all correspondences between VA officials and the three men identified in the article, without delay.” If the revelations “prove true and VA is being secretly run from the shadows of Mar-a-Lago by individuals with no accountability to taxpayers and who have never served” in government, Walz wrote, “that would amount to an unprecedented, disturbing and profoundly unacceptable betrayal of our nation’s veterans.”

In another email, from last September, Perlmutter told some government officials whose names are redacted, that he and associates “have been talking to Dr. Shulkin for many months about identifying the existence of healthcare delivery issues at VA medical centers” including that some VA hospitals “are delivering some specialty healthcare when they shouldn’t, and when referrals to private facilities or other VA centers would be a better option.”

Perlmutter wrote that “our solution is to make use of the academic medical centers and medical trade groups, both of whom have offered to send review teams to the VA hospitals to help in this effort. The purpose of this email is to see if you know of any impediments to taking them up on this offer and to get your thoughts in general about this approach.”

Several Democratic senators and representatives have called for the VA inspector general and the Government Accountability Office to investigate the legality of any influence the Mar-a-Lago group had on VA appointments and policy, and whether laws were violated or personal business interests advanced.

VA, said Walz, “is the physical embodiment of the promise we made to veterans. It is not and never will be a vehicle for Trump’s Mar-a-Lago cronies to drive policy that benefits their private interests.”

Perlmutter, Moskowitz and Sherman, in a statement to ProPublica, downplayed their influence, said no one was obligated to act on their counsel and they sought “nothing at all in return” for their advice.

Principi said he is “hopeful that this chapter has been closed and the President will allow Secretary Wilkie, in coordination with the White House and Congress, to do what’s necessary to serve the needs of our nation’s veterans. I am confident that the secretary is going to move forward and identify the right team and the right policies that are needed at the VA.” The VA, he said, “is yearning for strong leadership. [Wilkie] brings that. He’s dedicated and he cares about the mission.”