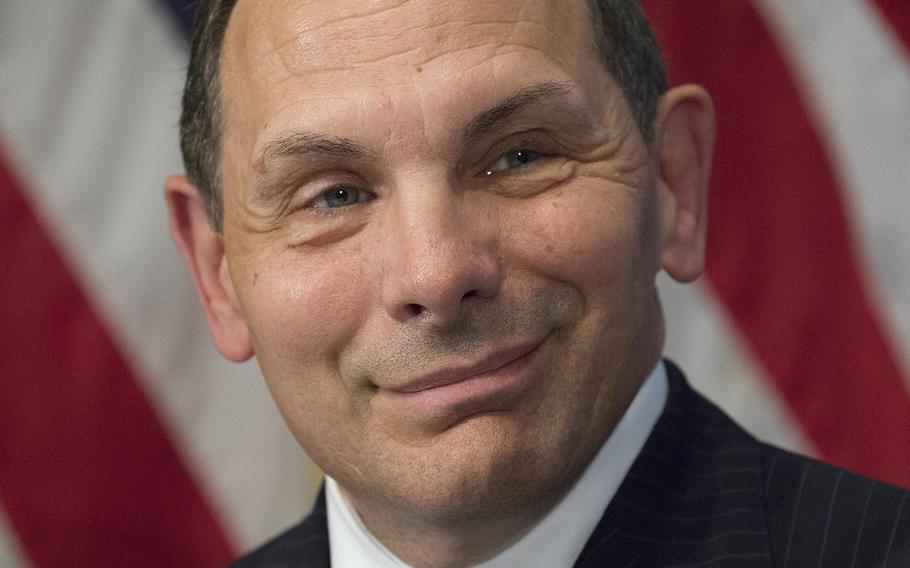 Then-Secretary of Veterans Affairs Bob McDonald waits to speak at the National Press Club in Washington, D.C., in November, 2015. (Joe Gromelski/Stars and Stripes)

WASHINGTON – As the long-standing debate about whether the Department of Veterans Affairs is sliding too far into the private sector reignited this week, former VA Secretary Bob McDonald had a message for the VA: find Find the right balance and keep political ideologies out of it.

McDonald was appointed by President Barack Obama in 2014 to lead the VA at its worst moment, after it was discovered some VA staff manipulated data that tracked how long veterans were waiting for medical care. He implemented the congressionally mandated Veterans Choice Program, which allows veterans to receive care in the private sector.

Now, the program is weeks away from running out of funding, and Congress is scrambling to find a solution. The situation is again stoking fears of privatization that escalated when President Donald Trump took office.

Eight veterans groups on Monday railed against a plan that would have provided $2 billion for the Choice program by siphoning money from other VA programs. They viewed it as prioritizing private-sector health care while neglecting VA services, and setting a dangerous precedent.

McDonald said Wednesday that the VA needs private-sector care. But veterans, and the rest of America, need the VA.

“In the end, we’re going to have to find the right equilibrium, where we have a strong VA but we also have a strong set of private-sector providers who work synergistically with the VA,” McDonald told Stars and Stripes. “If we don’t get the balance right and have too much in the private sector, veterans will get hurt and the VA will atrophy. On the other hand, if we don’t use the private sector, we won’t have the capability to treat veterans in a timely fashion.”

Near the end of his time as secretary, McDonald touted that about 3 million appointments had been made for veterans in the private sector from October 2015 to August 2016.

In a USA Today article this week, current VA Secretary David Shulkin wrote the VA has authorized more than 18 million private-sector appointments since the start of 2017. President Donald Trump said during a veterans rally Tuesday that appointments through the Choice program would “be tripling up very shortly.”

Beyond the need for the VA to maintain balance with private sector care, McDonald didn’t have much to say about the department or its direction.

It would be “unfair of me to make any judgment,” he said.

On Shulkin, McDonald said: “I don’t want to talk about other people. That’s not my style.”

But he did caution that the way to a balanced VA was not through a big, politically motivated change.

“It’s really important we discover what that equilibrium is,” McDonald said. “And we need to evolve our way there, rather than some draconian move based on political ideology.”

By the time McDonald had completed his second year with the VA and Trump was elected, 24 veterans organizations trusted him enough with reform efforts in the department to sign a letter encouraging the new president to retain him as VA secretary.

He credited some of that success to he and former deputy secretary Sloan Gibson remaining apolitical.

“What was easy about it was, I had no ambition,” McDonald said. “Sloan had no ambition. We had already led large businesses, done well financially, we weren’t going to run for political office. It was a liberating point of view, and we could speak truth to power with no other concern.”

McDonald recently announced his next move after leaving the VA.

When it was clear that McDonald would not stay on as VA secretary, veterans service organizations approached him and asked that he take a seat on their boards of directors.

McDonald announced this week that he joined the board for RallyPoint, a social network geared toward the military and veterans community that has about 1.3 million members. McDonald, a retired Army officer and former CEO of Procter & Gamble, said it would allow him to use his experiences in business, the government and military.

“I loved my time in the VA and serving veterans,” he said. “I couldn’t turn my back on it.”