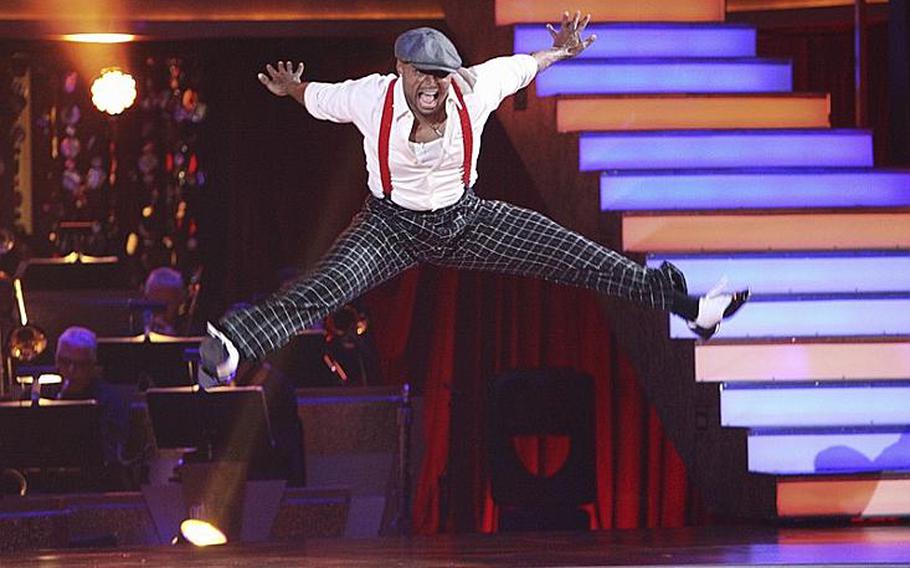 J.R. Martinez leaps during his jive on the second week of "Dancing with the Stars." (ABC)

J.R. Martinez leaps during his jive on the second week of "Dancing with the Stars." (ABC) On this week's "Dancing with the Stars," themed "The Most Memorable Year of My Life," each couple performed a Ballroom or Latin style of dance to their song of choice. J.R. Martinez, right, and his parter Karina Smirnoff performed a rumba to "If You're Reading This." (ABC)

“Tonight, they’re all dancing from the heart,” host Tom Bergeron said to kick off week three of “Dancing with the Stars.”

Each of the couples for Week 3 danced a program that represented the most memorable year of his or her life. I’m curious about this unusual theme. I think it’s a good way for these lesser-known celebrities to connect with the audience.

There is no montage of rehearsals this week, but instead they get right into the dancing. Martinez went sixth out of the field of 10. As announced last week, Martinez and his professional dancing partner, Karina Smirnoff, danced the rumba.

Martinez explained that his most memorable year was the year he was injured while serving in Iraq when the Humvee he was in drove over a landmine. He was 19 years old. They show him telling his story to Smirnoff while they sit very close together at rehearsal. He said a week after the blast, he asked the nurse for a mirror. “I just froze for a couple seconds, long enough to turn my head to each direction to look to see how bad it was. … I just thought to myself I would have been better off if [hadn’t] survived. It was a tough time in my life. I felt there was no one else in this world that could understand the pain I was feeling.”

His mother helped to change this mindset by pointing out that anyone who came into his life from this point on would be a part of it because of who he is and not what he looks like. And from that point on, he chose to fight.

Martinez then dedicated the dance, set to Tim McGraw’s “If You’re Reading This,” to the servicemen and women who didn’t make it home. Martinez said in a voiceover before dancing, “I just want people to say, ‘that is a beautiful dance.’ ”

And it was a beautiful, emotional and powerful dance. Martinez wore dark green pants and a dark tie and Smirnoff wore a satiny gown. Their rumba was gentle and languid with tight embraces and sweeping moves. He was smooth, with few of the “stop and starts” that seem to plague some of the other contestants.

While they waited to hear from the judges, Martinez fought tears and Smirnoff gave him a hug. He said Tuesday morning on Twitter that “Last night I got emotional before the dance even started. They were tears of remembering a hard time in my life but also of joy of how far I've come. I THANK all of you for embracing it! Many men/women didn't get that second chance & their families changed.”

Carrie Anne Inaba: “Heroes, I believe, are made …. They are ordinary people who do extraordinary things. Tonight you did something extraordinary. You touched us all. I could feel the weight with which you danced. … I thank you because this was one of the most profound, honest dances I’ve ever seen.” Her score: 9.

Len Goodman: “Every season, somebody comes along who dances to a standard that is totally unexpected. This season, that is you. I didn’t expect performances like this from you. ... So poignant. And I loved it.” His score: 8.

Bruno Tonioli: “You dance from your heart … it was tangible. You could touch it.” He liked Martinez’s lines and said his extensions were a “great, great achievement.” His score: 9.

#TeamMartinoff’s total score is 26. They are again tied for second – this time with Chynna Phillips and Tony Dovolani.

How did you feel about the performance? Let us know in the comments below. Check back here tomorrow for the results. Will Martinez make it through another elimination?

J.R. Martinez and his dance partner, Karina Smirnoff, made it through the Week 2 elimination on "Dancing with the Stars."

In the clips before the results were announced, Martinez joked that he'd been robbed when it came to the judges’ scores. He scored a 22 after a jive that the judges gave mixed reviews.

Next week, Team Martinoff will be performing the rumba, according to Martinez's Twitter feed. You can follow it here:@knowjr. He tweeted Wednesday morning: "I wake up being grateful I'm safe to dance another week. Considering the judges feedback~I know I passed b/c of ALL of you! THANKS!"

Welcome back for Week 2 of “Dancing with the Stars”!

The show opened with a montage showing how frustrated all of the contestants are. Could this be because the teams had three weeks to work out their first routines and only four days to craft the dance for this week? Probably. The teams can choose between the jive and the quick step, and both dances require fast feet and sure steps.

I watched all of the Week 2 performances and was struck by how evenly matched many of the teams are. A good number of the stars have picked up the dances and choreography fairly well. None of them appears to have a dance background or is super sporty – besides Hope Solo. I was surprised, too, by which celebs I’m enjoying – Nancy Grace and Rob Kardashian both gave good performances. Judge Len Goodman was thrilled that Grace’s dance actually was the quick step.

As J.R. Martinez is tied for first place with Chynna Phillips, he went last. Before Martinez and his partner Karina Smirnoff dance, there is a montage of #TeamMartinoff’s rehearsals for the jive. Martinez is really working it and explains that his partner made the choreography very challenging. Martinez says he feels like he’s not as well-known, so he has to get the dance down so he has the judge’s scores to give him a boost. I was surprised by this, considering he had daily exposure on the popular, recently canceled “All My Children.”

The team's jive started with the couple delivering newspapers. I took that as a shout-out. The pair gave a high-level, high-energy dance to “Jump, Jive An' Wail,” by The Brian Setzer Orchestra. I admit, I not only cheered during the performance, I applauded. I'm not a dance critic, but I liked it. It played well to the crowd. His “AMC” costar, Shannon Kane, who played his fiancee Natalia, was in the audience and cheered too.

After the performance, Martinez said: "I fed off the crowd and they gave us so much energy. So you know what, the judges gave their opinion, but the crowd loved it and we loved it."

Host Brooke Burke-Charvet called him a natural and asked him if he had any prior dance experience. Martinez says he doesn't.

Bruno Tonioli: “J.R., you’re born to dance! … The most satisfying overall performance of the night. … Overall, I’m ecstatic with the performance.” His score: 8.

Carrie Ann Inaba: “It was great, it was fantastic, but there was a lift!" But overall, she liked the performance. Her score: 7.

The total score for #TeamMartinoff is 22, which puts Martinez in a tie for second place. In first place is Ricki Lake and her partner, Derek Hough. Kristen Cavallari and her partner, Mark Ballas, also got a score of 22.

Team Martinoff - J.R. Martinez and his dance partner Karina Smirnoff - made it through the first elimination on "Dancing With the Stars."

Before announcing the results, the show aired a clip of the pair just after their first performance.

“Three weeks of hard work and you nailed it!” Smirnoff told him.

Welcome to the first week of “Dancing With the Stars.” It’s the 13th season of the very popular competition. I’ve watched quite a few seasons of the show, including the first.

Long-time viewers might notice that there’s something new about the show: the dance floor. It’s elevated, adding an extra layer of danger for the dancers. That’s just what we need. More injuries to the stars. But the competitors are all smiles as they come down the steps to the floor in the opening – and no one’s smile is bigger than J.R. Martinez’s.

Martinez’s performance is one of the last. He and partner Karina Smirnoff, one of my favorites, chose the Viennese Waltz as their first dance. Before they dance, though, there's a nice vignette about their first meeting and rehearsals. “I had butterflies before I met my partner and when I saw it was Karina, I was so excited,” Martinez says in a voiceover.

Smirnoff asks about Martinez’s experiences and he explains about his injuries and the 33 surgeries he’s had since. The audience applauded when he says “I’m proud of my scars, and I'm proud of my journey. And I’m proud of it because it all led me to this moment to be right here with you.”

Smirnoff calls her partner a hero and admires his positivity.

Martinez's last words in the vignette were: "The Army taught me a lot. But there’s one thing it didn’t teach me: The Viennese waltz."

But Smirnoff did what the Army didn't. The couple danced to “Breakaway,” originally performed by Kelly Clarkson. And in my opinion, it was beautiful. Martinez was so graceful, and he looked like a natural dancer. His arms were extended, his transitions were smooth and he made it look so easy.

Here’s some of what the judges said:

Len Goodman: “For me, J.R. stands for just right." He added that among “the best performances of the night, you were right up there."

Bruno Tonioli: "I can't believe for someone who's never danced before how well you did it." He added that the some "spit and polish" was needed, but he agreed with Goodman.

Carrie Ann Inaba: "I was absolutely touched by your performance.” She appreciated the emotional quality he brought to the dance on day one. "It's beautiful to see that confidence, and that beautiful fluidity and musicality," she said.

They got a combined score of 22 out 30 possible points – and they are tied for first place! Looks like we’re going to be following Martinez for a while -- we'll find out Wednesday!