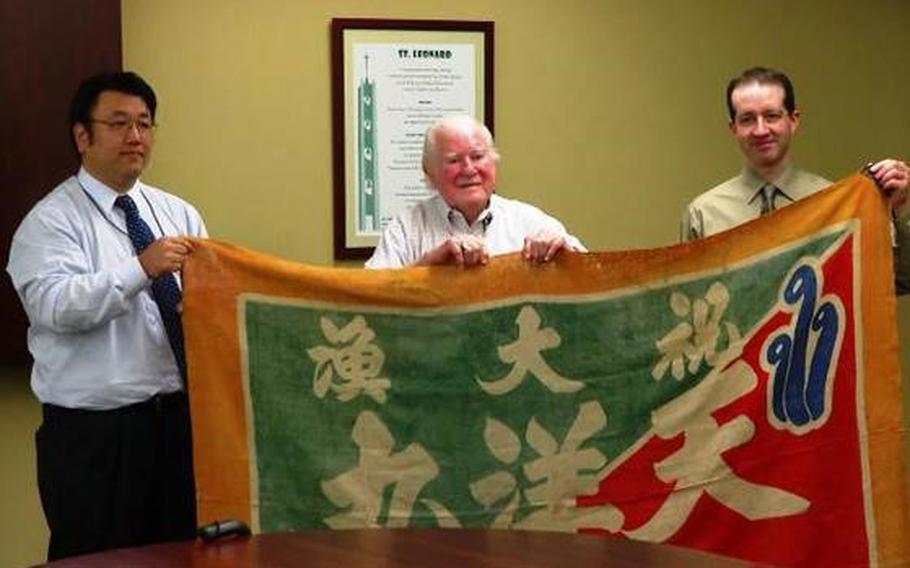 A flag recovered from a sunken Japanese warship was returned to its home port by Pete Losh, 94, of Dayton, Ohio. (WDTN photo via U.S. Embassy)

A flag recovered from a sunken Japanese warship was returned to its home port by Pete Losh, 94, of Dayton, Ohio. (WDTN photo via U.S. Embassy) 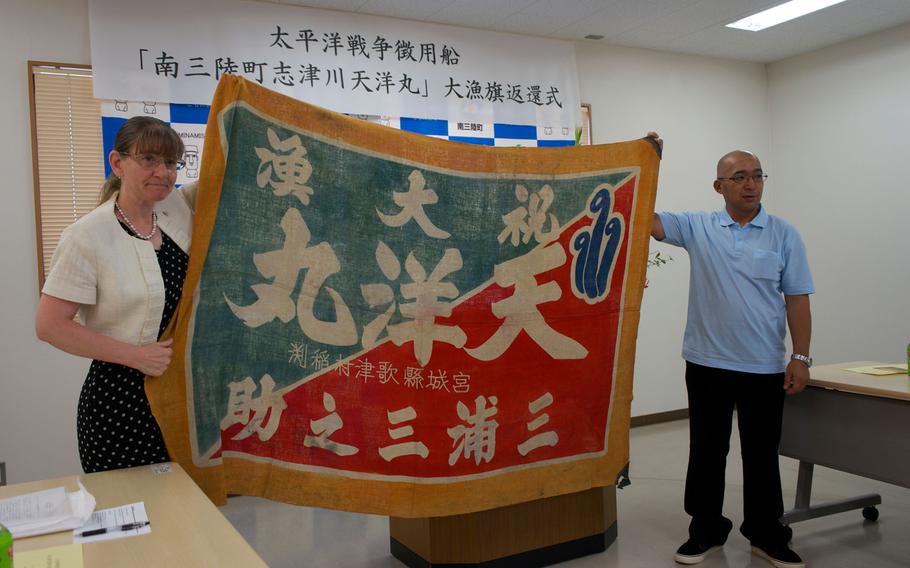 The war flag was returned at a ceremony in Minami Sanriku – an area of northeast Japan still recovering from 2011’s devastating tsunami. (Courtesy of Tohoku University, Japan)

YOKOTA AIR BASE, Japan — A flag recovered from a sunken Japanese warship was returned to its home port Monday thanks to the American sailor who carried it from the battlefield in World War II.

The Shizugawa Tenyomaru started out as a fishing vessel sailing out of Minami Sanriku, a village in Miyagi Prefecture, Japan.

When the war broke out, the ship was drafted into the Imperial Japanese Navy, sent south to defend Japanese-held islands and ended up on the bottom of the Pacific Ocean after it was sunk by Allied forces.

Pete Losh, 94, of Dayton, Ohio, has a hazy memory of exactly how he came into possession of a large flag recovered from the wreck.

It may have been found after the battle of Guadalcanal — where dozens of Japanese, U.S., Australian and New Zealand ships were sunk in Savo Sound, called Ironbottom Sound by Allied sailors. Or it might have been found off the island of Saipan, site of another epic battle.

“The Japanese ship was sunk by one of ours close to shore but in about 100 feet of water,” Losh said this week.

He was leaning over the gunwales of the USS Chickasaw — a seagoing combat tug that hauled fuel and ammunition — when a diver who had gone down to inspect the sunken ship surfaced with the colorful flag, which had been fluttering underwater in a beam of sunlight.

“He said, ‘Take this flag. You want it?’” said Losh, who served as a petty officer 1st class on four ships during World War II, including the aircraft carrier USS Essex, which survived a kamikaze attack.

After five years in the Navy, Losh went home to Ohio with nightmares about the death and destruction he’d seen on Saipan. He graduated college, forged a career in commercial art and continues to paint. He recently finished a picture of the Essex that may end up on the USS Yorktown — now a floating museum near Charleston, S.C., he said.

For decades, the Japanese flag Losh brought home sat in a box full of old photographs and other mementos. It wasn’t until a friend asked about his war experiences that the old sailor opened the box and found the flag, which had kanji characters printed on it.

Losh’s friend contacted the Japanese government, and officials translated the kanji to find out the name of the ship and where it came from. Losh handed the flag over to the Consulate-General of Japan in Detroit last month and, since then, has received regular updates on the search for its owner.

“They told me about the captain (of the the Shizugawa Tenyomaru) who went down with his ship,” Losh said. “They’ve contacted his family.”

A ceremony in Minami Sanriku – an area of northeast Japan still recovering from 2011’s devastating tsunami – marked the flag’s return after a seven-decade journey, said a statement from the U.S. Embassy in Tokyo.