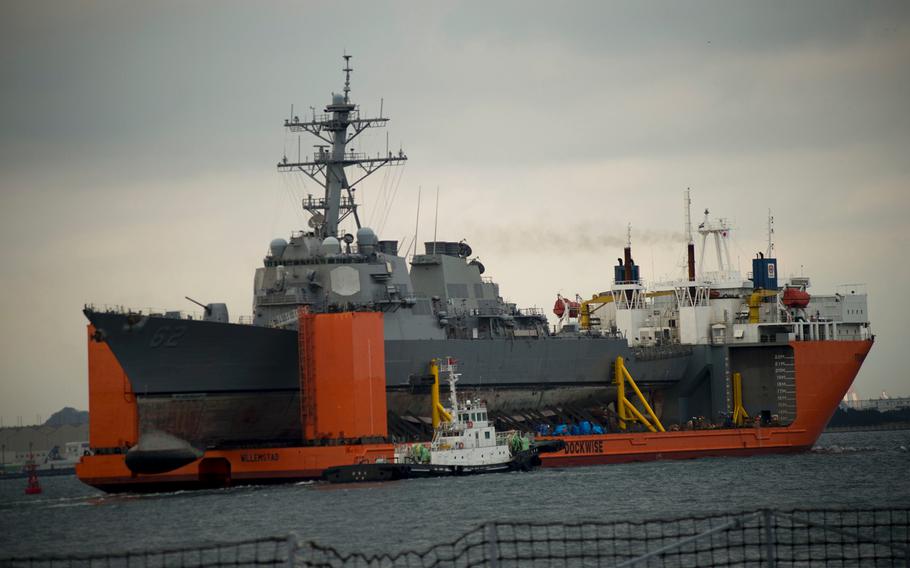 WASHINGTON — Faulty radar was a way of life on the USS Fitzgerald and was a key contributing cause for its collision with a merchant vessel June 2017 in the busy waters off the coast of Japan.

Those and other details about a chain of errors leading up to the deadly crash were revealed Wednesday in a preliminary hearing for two junior officers at the controls that night. It’s now up to a hearing officer to determine whether there’s enough evidence to try those officers in a court-martial and whether they should be held negligently responsible for the deaths of seven sailors.

Wednesday’s Article 32 proceeding at the Washington Navy Yard also laid bare the stresses in a Navy that demands excellence from its sailors even while pushing parts of the fleet to what some say was the breaking point.

The ACX Crystal took the Combat Information Center by surprise. Until just moments before the collision, the accused officers in the center, which is several levels below deck, were unaware of the danger from nearby ships, and there was little communication between the center and the bridge. Data pulled from the Fitzgerald and the Crystal and presented at the hearing showed that the Crystal was tracking 25 to 30 ships in its orbit in the lead-up to the crash. The Fitzgerald was tracking four or five.

Information coming into the information center was, at best, incomplete. On that, the government and the defense agreed.

In an 11-hour hearing, prosecutors painted a picture of Lt. Irian Woodley, the ship’s surface warfare coordinator, and Lt. Natalie Combs, the tactical action officer, as failing at their jobs, not using the tools at their disposal properly and not communicating adequately. They became complacent with faulty equipment and did not seek to get it fixed, and they failed to communicate with the bridge, the prosecution argued. Had they done those things, the government contended, they would have been able to avert the collision.

“Imagine the Crystal, a 29,000-ton container ship, suddenly takes up the entire (radar) screen,” prosecutor Lt. Cmdr. Katherine Shovlin told the hearing officer. “There was not a breakdown of communication. There was …. no communication.”

Defense attorneys countered, saying the officers were strong performers whose equipment didn’t work properly. The radar and the Automatic Identification System they were working with were in a “degraded” state, so many of the ships around the Fitzgerald did not appear. The officers were unaware of the other ship’s approach. The problems were systemic, the defense argued, with operational tasking so intense that the ship had no time to train or do repairs and with sailors who were exhausted from working 20-hour days.

“The Fitz was a wreck of a ship -- I do not state that lightly,” said David Sheldon, Combs’ civilian attorney. “And the U.S. Navy knew that.

Woodley and Combs face three charges: dereliction in the performance of duties through neglect resulting in death, negligent hazarding of a vessel and negligent homicide.

The hearing officer has 14 days to make his recommendation on whether all or some of those charges should go forward in a court-martial. It will be up to the convening authority, Adm. Frank Caldwell, to decide whether to accept those recommendations.

Prosecutors said Woodley failed at his main duties, which were to maintain an accurate picture of all the vessels around the Fitzgerald, oversee other surface watch standers in the combat center and share information and recommendations with those navigating and driving the ship.

The prosecution case was in the details of the CIC’s failure to capture nearby ships on radar or other systems and the failure of Combs and Woodley to recognize the obstacles impairing their work or to keep close communication with the bridge.

The defense argued that the crew made the best of what they had, but were given no time to train or upgrade, no time for maintenance. Lt. Cmdr. Ritarsha Furgan, who had been the combat systems officer on board the Fitzgerald until March 2017, said she had warned her boss that the ship was in too great a state of disrepair. After a period in dry dock and heavy crew turnover, the ship had been on back-to-back missions. It needed time for training and equipment repairs, she said.

“I stood in my boss’ office and said we should not be going out, we are not ready,” she said.

Furgan said the demand for ships in 7th Fleet meant that the Fitzgerald had been having what was known as “red line issues,” meaning higher level permission was needed to get underway because something wasn’t working properly.

In her prior assignment, red line issues were a “show stopper,” Furgan said.

On the Fitzgerald, “they weren’t a show stopper. Find a part. Find a body and make due to get under way.”

Rear Adm. Brian Fort, who conducted a Navy investigation of the crash, testified for the prosecution that the SPS 67 radar in the CIC was set to the wrong pulse, which added what is known as clutter, or fuzziness, to the picture. He said that through his interviews with dozens of sailors on the Fitzgerald that night, the CIC had learned to live with it.

“Quite frankly, they accepted the clutter on the radar and did absolutely nothing about it,” he said in testimony by telephone.

Defense witnesses testified that the pulse setting was controlled in a separate room by engineers, and that those in the CIC would not have known it was on the wrong setting. Clutter is also created by weather and atmospheric conditions.

Similarly, Fort said the AIS – which identifies the name and location of every ship on the system -- would frequently go down because of a loose cable, and neither Woodley nor Combs complained.

Fort testified that he’d spoken with half a dozen of Woodley’s shipmates, whom Fort said spoke negatively of Woodley’s performance. He said he concluded the same, in part because of Woodley’s failure to track 13 ships that came close enough to be considered “contact” – that is, requiring tracking on the CIC systems -- but the watch standers were not aware that any ships had come within 10,000 yards of the Fitzgerald. One ship had come within 650 feet, he said.

To Fort, that lack of awareness was on the shoulders of those in the CIC.

“Surface watch wasn’t tracking any contact within 10,000 yards but that doesn’t absolve them because they weren’t operating their systems correctly,” he said. “CIC was not tracking what they should have been tracking.”

Defense attorneys argued that Fort’s report was unreliable and biased.

The report was to be used for the Navy’s international investigation and also for external negotiations or lawsuit involving the Crystal or other vessels. It was not released to the public and Fort’s interviews with the sailors appear only in summary form, Fort confirmed in testimony. None of the subjects were asked to review the summaries and authenticate the content.

Defense attorneys said they determined that some summaries mischaracterized interviews and argued that the hearing officer not allow that key report into evidence. The report and Fort’s testimony were allowed, though the hearing officer allowed further arguments to be submitted in writing.

“The problem with the government’s case is it relies solely on this dual-purpose investigation,” said judge advocate Cmdr. Justin McEwen, representing Woodley’s defense.

“What you have here is an incredibly biased dual-purpose investigation that started with the result and went out prove that,” he said. “It ignored exculpatory evidence.”

Four defense witnesses testified that Woodley was a professional, by the book and engaged SWC who kept on his sailors to pay attention and not lose sight of their watch. Petty Officer 2nd Class Matthew Stawecki, who was the surface watch supervisor and manned the 67 RADAR,said Woodley was a “vigilant watch stander” who always emphasized communications with his sailors.

Combs’ duties included overseeing the combat center. Her job was to support the bridge by ensuring it received vital contact information and making sure watch standers in the center were doing their jobs properly.

Fort testified that Combs had 13 actions on her console that night – none in the last hour and 13 minutes, leading up to the collision – and had no communications with the bridge. He said no one he interviewed could remember what she was doing.

Furgan countered that while Combs was quiet, she was accomplished and effective. Still, she acknowledged that no contact with the bridge was surprising.

“Silence on the deck that night when the ship was moving through congested waters should have been alarming,” Sholvin said.

“Lt. Combs had situation awareness,” she said. “She knows if she’s not seeing anything, not hearing anything from the bridge, that should be a red flag.”

The problems on the Fitzgerald were systemic and much bigger than the two officers facing charges, McEwen argued. All the crews were living with them.

“They were functioning as the Fitzgerald functions,” McEwen said. “They just happened to be sitting there when it happened. Is it fair to scapegoat them?”